The Post-Journal
by Scott Kindberg
February 13, 2013

‘There Are No Words’

Alex Conti is a sportswriter's dream, a man who has never met a digital recorder or steno pad he didn't like. He's normally a walking quote machine, thoughtful and passionate, particularly when it relates to the sport he loves - wrestling.But there was dead silence on the other end of the phone when I called him early last week. While only seconds passed, it seemed like an eternity.

"There are no words,'' he finally said.

Six months ago, Conti, the Fredonia Central School wrestling coach, was in London at the Summer Olympics, serving as an assistant coach on the U.S. women's wrestling team.

He's in a funk, figuratively grappling with the notion that the sport he's spent a lifetime promoting and coaching may be facing Olympic extinction in seven years. That's because the International Olympic Committee last week dropped wrestling from the program of the 2020 Games. Just as frustrating to Conti is that none of the 15-member committee has any wrestling background.

"Not one is even remotely related to the wrestling world,'' Conti said.

A day after the IOC's announcement, committee president Jacques Rogge agreed to meet with the head of wrestling's governing body to discuss ways the sport can fight to save its place in the Olympics, but Conti believes it's a moot point, suggesting that it's "almost a guarantee that it won't be back for 2020.''

"That eliminates the dreams of an entire group of athletes,'' he said. "That's how furious I am with the whole process. Honestly, we're not supposed to be negative about it, we're supposed to take the high road. That's what the hope is from USA Wrestling. They want us to stick to the script, but I'm not a script guy."

Walt Thurnau will be inducted into the Chautauqua Sports Hall of Fame on Monday night at the Lakewood Rod & Gun Club. The honor will be in recognition of his four decades as wrestling coach at Southwestern Central School and Jamestown Community College.

He might be just as thrilled with whom he'll be sharing the dais. Bruce Baumgartner, the owner of four Olympic wrestling medals and now the athletic director at Edinboro University, will be the guest speaker for the evening.

"That will be one of my greatest thrills,'' Thurnau said from his Kentucky home last week. "We used to go to camps at Edinboro all the time. I look forward to seeing him."

I'm guessing I know what the topic of conversation will be.

"I'm in complete shock,'' Thurnau said of the IOC's decision. "I had no idea they were even considering something like that.''

Even more infuriating for wrestlers around the world is that their sport will join seven others vying for one opening on the 2020 program: a combined bid from baseball and softball, karate, squash, roller sports, sport climbing, wakeboarding and the martial art of wushu.

None of them have the kind of Olympic history that wrestling does.

"When you talk about a sport that is participated in by almost every country in the world," Conti said, "it's a sad, sad state.''

PJ Wendel was a decorated wrestler at SWCS, earned All-American honors at SUNY Brockport and later was a successful coach at Falconer CS. He said his emails "never stopped firing'' after the IOC's decision.

One of his electronic communications was from Ethan Bosch, a friend and former Olympic wrestler from Western New York, who has wrestling contacts all over the world, Wendel said.

"A lot of people worldwide are enraged,'' Wendel said. "It's not just in the U.S. For a lot of countries, wrestling is huge."

How huge is huge?

"We take it personal (in the U.S.)," Conti said, "but the (rest of the world treats) wrestling like our NBA. The wrestlers in Russia are treated like the superstar athletes we have walking around. It's very hurtful to us, but in these other countries you're messing with the Tiger Woods and Michael Jordans of their entire sports world."

It's that political pressure the rest of the world can exert on the IOC that gives Conti some guarded optimism. 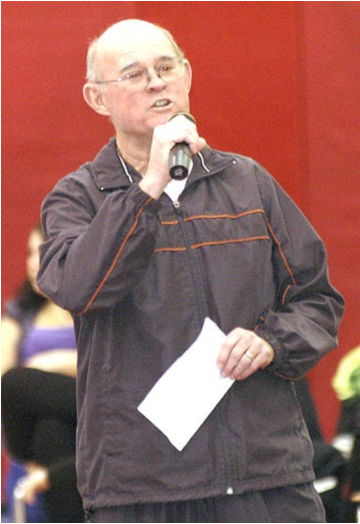 "I place my hope and confidence in what they can do,'' he said.

Matt Mazgaj graduated from Southwestern Central School in 2005 as one of the best wrestlers in school history. Now an attorney in Washington, D.C., Mazgaj's love for the sport hasn't waned a bit.

"Growing up I had a poster of Bruce Baumgartner up when I worked out, and closely followed Rulon Gardner through his Olympic career,'' Mazgaj said. "Now kids have Jordan Borroughs to look up to, but with this decision an entire generation of young wrestlers may grow up without those positive role models.''

Mazgaj also took to the task the "curse of the modern Olympics.''

"It has been infested with the need to commercialize the events,'' he said. "Because wrestling may not be as marketable as other sports, it was voted out with the potential for rollerblading to replace it. It will be a sad day if that comes to fruition.''

Nevertheless, Mazgaj is impressed by the strong reaction by the wrestling community.

"I believe that the ultimate silver lining to this decision will be that the Olympic hiatus from wrestling should be short-lived and may actually increase the commitment of the wrestling community to developing the sport into a marketable commodity.

"The wrestling community is tight-knit and will not let its sport fall by the wayside." Let's hope that Mazgaj's prediction is on the mark.

If not, Conti said, eliminating wrestling from the 2020 Olympics would be a "tragedy." "There are world tragedies,'' he said, "but in the sporting world this is a tragedy. Absolutely."