The Post-Journal
by Scott Kindberg
October 13, 2014

The cool thing about Art, though, is he hasn't retired from life.

"I've always thought the secret of longevity is having a reason to get up in the morning, keeping active,'' he said. "I don't think there's anything that (hurts) you more than just sitting in a chair.

When he said that during a telephone conversation last week, the caller laughed out loud. Art Asquith treading water? Not a chance. For a man who has spent his entire life moving from one adventure to the next, just keeping his head figuratively above water has never been part of his DNA. He has always seemed to have people to meet, golf outings to plan, music to sing and drums to play.

His latest "bucket-list" entry, however, may have topped them all.

Several weeks ago, Art, at the urging of his daughter, Susan, joined his granddaughter, Kaitlin Condon, and her boyfriend, Josh Powers, on an excursion to the Sky High Adventure Park at Holiday Valley Resort in Ellicottville. 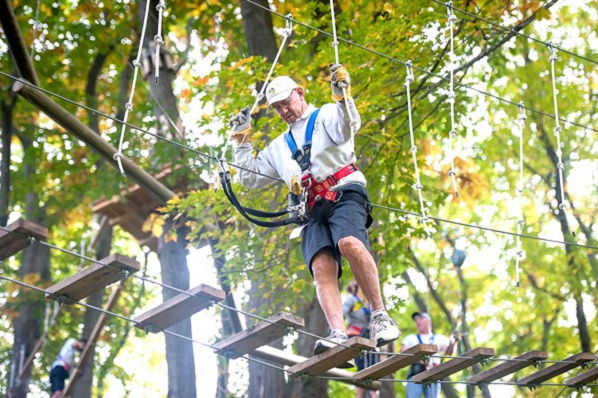 The Aerial Park, according to its website, "is a series of platforms and 'bridges' in a four-acre section of the woods. The platforms are built in the trees and the bridges and zip lines connect the platforms. The bridge may be a log, hanging chunks of wood or other obstacles or ladders and the challenge is to figure out how to get across to the next platform. It is not all strength; it is more strategy and balance."

"It just sounded like fun,'' Art said. "My daughter, Susan, said, 'We're going to go zip lining, how about that?' I thought it was a good idea. All I could think of was climbing in a chair and, 'Weeeeeeeeeeeee.'

Ever the competitor - he was inducted into the Chautauqua Sports Hall of Fame in 2010 - Art wasn't about to back down from a challenge, even if that challenge was 40 feet in the air.

"A lot of it is balance,'' he said. "Heights have never bothered me. That was no big deal, but in one place there were about eight 4x4s latched together by a couple of cables and they were three feet apart. I had to go up about eight of them to get to the platform. That was a tough one. Any muscles I had when I was 25 had long since disappeared."

But for most of the course, Art, the former minor league baseball player in the New York Yankees organization and once a teammate of Bobby Richardson in Olean, held his own, steadily making progress toward the finish line and showing to all that age is just a number.

"I was doing good until about three-quarters of the way through,'' he said, "but the cable that I had my feet on was swinging. I had both hands on the cable above my head and, ordinarily, your weight is on your legs and feet, but in this situation the cable was swaying so much, my weight instead was on my hands and arms. I fought it for about 15 minutes and then I said to one of the kids. 'I'm not going to make it happen.' Eventually, they let me down to the ground.

"Nobody behind me continued either (after that point). That station was kind of the clincher. (Powers) made it across and he's the only one that did. He's 29 with muscles."

And my arms hurt just thinking about his hour in the trees.

Art, who grew up in Little Valley, retired from teaching in 1992, but continued to coach through the 2006-07, which gave him a 50-year coaching career at Cassadaga Valley. Along the way, he was a past officer of the Chautauqua-Cattaraugus Athletic Association, a longtime basketball official, a past club champion at Cassadaga Country Club, a founder of the area's Senior Golf Tour and a member of the National Ski Patrol. All of those accomplishments, and more, earned Art induction into the Western New York Baseball, the CVCS District, the Grape Belt Sports and the Chautauqua Sports halls of fame.

But his resume has more.

On Asquith's link on the CSHOF website one can find a color photograph, which was taken during a golf outing in Jamesburg, N.J. in 1982. One of the six guys in the photo is Asquith. The other five are Willie Mays, Brooks Robinson, Gordie Howe, Johnny Unitas and Joe DiMaggio, who all signed the photo, which Art has since donated to the CSHOF on West Third Street in Jamestown.

Each one of the sports icons who autographed the photo is wearing an ear-to-ear grin.

Not surprisingly, Art - a sports icon in his own right - is smack dab in the middle of them. His smile is the biggest of all.

More than 30 years later, he's still smiling all the way to his next adventure.