For The Love Of Art

SINCLAIRVILLE — Folks entering the gymnasium at Cassadaga Valley Central School on Friday night were handed a piece of paper that included, among other things, a photograph of a young man — probably in his late 20s or early 30s — who was sporting an ear-to-ear grin.

The image, which was taken about 60 years ago, was of Art Asquith, who was then in the early stages of his CVCS teaching career.

“This picture is so old,” one attendee joked as he found a seat in the gym’s bleachers, “that Art had Jesus in his graduating class.”

But on an occasion celebrating Asquith’s character and his teaching and coaching contributions to an entire community in central Chautauqua County for 50 years, only the good Lord would know the number of lives he has impacted along the way.

In front of a sizeable crowd, Asquith’s family, friends, school officials and current and former students gathered to celebrate “An Evening with Art Asquith,” a tribute that was capped by having the gym named in his honor. 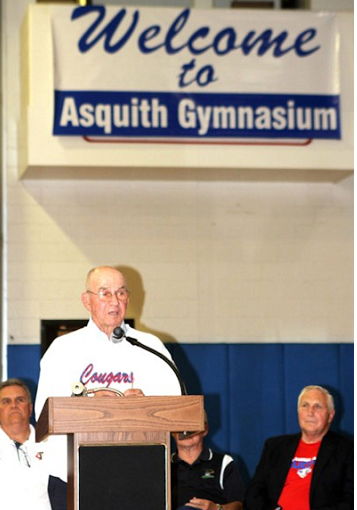 “Thank you … for a great journey,” said John Penhollow (CVCS Class of 1990), one of several people to publicly thank Asquith. “Every year when students, athletes and competitors enter this gym, they will ask about this Mr. Asquith and then the story will begin.”

What a story it has been.

A native of Little Valley, Asquith’s teaching career spanned from 1957 to 1992, but he continued to coach through the 2006-07 school year.

Along the way, he was a past officer of the Chautauqua-Cattaraugus Athletic Association a longtime basketball official, a past club champion at Cassadaga Country Club, a founder of the area’s senior Golf Tour and a member of the National Ski patrol. All of those accomplishments, and more, earned Asquith induction into the Western New York Baseball, the CVCS District, the Grape Belt Sports and the Chautauqua Sport halls of fame.

CVCS athletic director Mark Petersen recalled the reaction from his friends and colleagues upon being hired at the school 28 years ago.

That “biggest guy” was Asquith.

“He was at the top of the heap,” Petersen said. “He was the one who set the standard at Cassadaga Valley. He was our mentor, teacher and great friend.”

Asquith’s daughter, Ann, said her family’s life was filled with all types of sports growing up, but there was more to the games than keeping score. As an example, she talked about her father’s establishment of the men’s Senior Golf Tour that now bears his name.

“It wasn’t as much about winning, but more about providing an opportunity for guys over 65 to play the game they love for a small entry fee, a cart, a hot dog and a Coke,” she said. “It wasn’t about making any money, it was about the love of the game, the chance to play, to show sportsmanship, to have positive competitive values and to have fun. Do the best you can, try hard and feel good about it. … This is how he approached every aspect of sports and his family.”

His extended “family” — the CVCS community, actually — also paid tribute, including Superintendent Chuck Leichner, Board of Education member and former athlete Bill Carlson, retired teacher/coach Paul Cooley and former student Kari Barmore, the latter in the form of a letter.

Leichner noted that while the school plays many roles, the “primary task” should be “to demonstrate character and that’s why we decided to honor Art Asquith tonight.”

In addition to naming the gym in Asquith’s honor, his family has established an annual athletic legacy scholarship in his name. The first recipient of the $500 scholarship is CVCS senior Alyssa Hahn, a softball and volleyball player.

Leichner said that honoring Asquith was the first step in creating a CVCS Hall of Fame.

“I believe that when we’re talking about a Hall of Fame, it’s not just about some kid who can run or some kid who can shoot or a teacher who has stayed here a long time,” he said. “It’s about someone who has demonstrated what we want our kids to aspire to. Art is the standard bearer, the point person of what we will use to determine who is honored that way moving forward.”

Finally, an obviously moved Asquith stepped to the podium to address the crowd.

“Obviously, this is a tremendous honor and very humbling for me,” he said, noting that he once considered moving to Geneseo to teach and coach. After he and his wife Judy paid a visit, they realized that CVCS was home.

“Not only did I work with my kind of kid,” Asquith said, “I found out very quickly that many of the kids I was working with and teaching didn’t have a whole lot, but they were enthusiastic, they came into the gym ready to go and it seemed like whatever I tried to do they jumped in with both feet.

And on a warm night in a gym that now bears his name, the CVCS community showed Asquith its love in return.