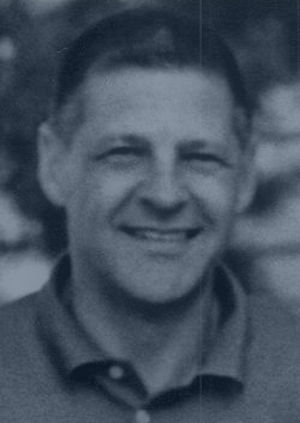 During his short lifetime, Ben Bishop was probably the best amateur golfer in the area from the late 1940s into the 1960s. If he hadn't have passed away in 1970 at the age of 54, who knows how many more amateur titles he would have captured.

Not only did Bishop dominate the club championship at Moon Brook Country Club by winning it 12 times, but away from his home course he won the Chautauqua County Amateur six times.

Long before his golf feats in Chautauqua County, the Marysville, Ohio, native showed his athletic abilities in the Buckeye State.

Bishop was also a member of the Wooster golf team.

His interest in golf began when he became a caddie near his Ohio hometown.

Bishop moved to Jamestown in 1938 and was a partner with his father-in-law, B.H. Ruland, in the accounting firm of Ruland and Bishop.

From 1942 through 1964, Bishop played in the Moon Brook club championship 19 times. He not only won it 12 times, but was also second three times.

It should be noted that he did not compete in 1945 and 1946 because of a wrist injury. He missed it again in 1952 because of a family illness and in 1959 he didn't compete at Moon Brook because he played in the Fred Waring Tournament at Shawnee-on-Delaware and was the medalist in qualifying with a 70. And in 1965 he didn't participate because a bad back prevented him from play 36 holes in one day.

It's no wonder why the Moon Brook club championship trophy was named the Ben Bishop Memorial Trophy in 1970.

Bishop's last club title was in 1964 when he defeated Bill Dickson 1-up in an 18-hole match. A highlight was Bishop carding an eagle 2 at No. 6 after Dickson hit his approach shot to gimme range for a birdie.

Bishop had some other memorable rounds at Moon Brook.

Away from Moon Brook, Bishop won the Chautauqua County Amateur four times and finished second six times from 1949 through 1963. Three of his second-place finishes were playoff losses.

He was also third once, fourth three times and fifth once.

And with all that success on the course, Bishop rarely practiced. 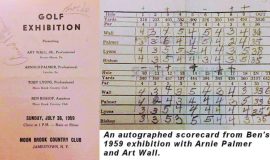 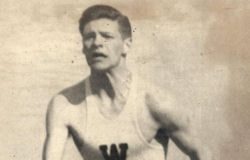 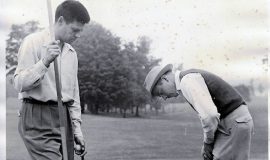 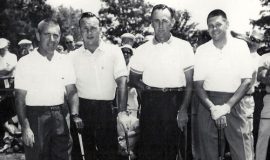 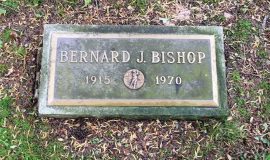 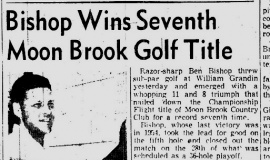 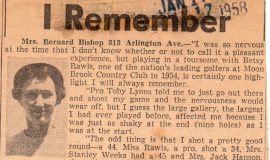 Steven Bishop speaks at the CSHOF induction of his late father Ben.