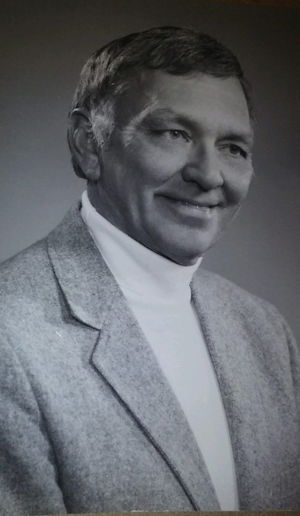 Bob joined the U.S. Army in 1946, when he began basic training at Ft. Bragg, N.C. He was shipped to Japan, where he worked in communications and climbed telephone poles to install phone lines after World War II. After his time in the U.S. Army, Bob worked at Crescent Tool Company for a short time before he attended the Superior Sign and Pictorial School in Chicago, Ill. Moving back to Jamestown, in 1948 Bob opened the doors of Hanson Sign and Screen Process Corporation. Soon after Hanson Sign was opened Bob’s brother, Jack joined him in the business. For over 40 years, he left his artistic mark with hand painted signs and hand lettered trucks for businesses, all around Jamestown, N.Y. He was one of the first to design and produce sand blasted signs. Bob retired from Hanson Signs in 1989.

Bob was a selfless, and fun loving father and grandfather, teaching valuable life lessons while having fun. He had the gift to connect and get the best out of others. Some called him the pied piper when it came to his grandchildren and youngsters, all eyes and ears were on Gramp. A great teacher and mentor to his kids and others around him.

Bob enjoyed many sports whether it be speed skating, soccer, football or baseball. He started the Jamestown Area Speed Skating Club, where he coached many young skaters in the area. He was there to help with the groundbreaking efforts for the indoor skating rink at Allen Park. Bob was also instrumental in developing the women’s softball league in Jamestown and coached the War Vets women’s team for several years. In 1983, Bob was inducted into the Chautauqua County Sports Hall of fame for his achievements in numerous athletic endeavors. He had fond memories of attending the 1980 Winter Olympics and watching speed skater, Eric Heiden win five gold medals, as well as witnessing the Miracle on Ice, when the USA beat Russia in hockey. One of his most cherished travels was a trip to Sweden for his 70th birthday, a present from his kids. He visited his dad’s homestead and spent time with his cousins.

Bob had many hobbies that he enjoyed with his family and friends, two of his favorites were hunting and fishing. He was also a talented craftsman, he loved wood carving and had even restored his two Chris Craft boats that were used on Chautauqua Lake. He also loved to take advantage of the lake freezing over to skate the length or to skate sail.

A true gentleman. A life well lived Dad, with much enthusiasm and kindness. You were the wind beneath all our wings.

Bob has donated his body to science at the University at Buffalo Medical School. A great big thank you for the wonderful caregivers: Mary, Lisa L., Karley, Annie and Lisa G. who helped our dad and family along the way. Thanks also to the team at Chautauqua County Hospice and Palliative Care.