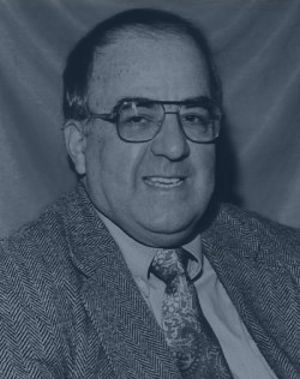 Bob Muscato
b. 1937
Category
Coaching
Year Inducted
1999
By the time Bob Muscato was inducted into the Chautauqua Sports Hall of Fame he had spent 42 years as a player, coach, athletic director, physical education teacher and official with a great deal of the span spent at the now closed Cardinal Mindszenty High School in Dunkirk.

Included in that time was 33 years coaching in high school and in college with 15 straight years of coaching three major sports (football, boys basketball and baseball). Counting everything in his distinguished career, Muscato has been involved in more than 1,000 victories.

Born in Dunkirk on August 17, 1937, Muscato played basketball in the sixth through eighth grades for St. Mary's Academy (1949-1951) and was a starting guard for two years.

In 1951-1952, he entered Cardinal Mindszenty and played junior varsity basketball for that season before moving to the varsity to become a three-year performer at point guard.

Football was started in 1952 and he earned two varsity letters while playing halfback and linebacker.

After graduating from Cardinal Mindszenty in 1955, Muscato entered Chaffey College in Alta Loma, California, that fall and was an all-star on the freshman basketball team and team doubles handball champion.

He received a degree in journalism and physical education there and later a degree in social science liberal studies and a certificate for social studies at Albany State.

Muscato coached the football team at Cardinal Mindszenty during two different stretches with the first being an assistant coach as either an offensive or defensive coordinator from 1956-1961. During that time his best teams were 8-0 in 1958 and 7-1 in 1959.

After a two-year absence, Muscato returned to the football wars as the head coach and began a period of seven straight winning seasons from 1964-1970 with the top clubs being 6-0-2 in 1964, 6-2 in 1966 and 7-1 in 1968. Six of those teams won Catholic League championships and overall his teams won eight titles. His football coaching continued all the way to 1978 season and that 1978-79 school year was the final one for the school.

After Cardinal Mindszenty closed, Muscato moved onto Bishop Turner in Buffalo where he was athletic director and chairman of physical education. He coached basketball to winning seasons in all three years with titles in 1980-1981 (16-8) and 1981-1982 (15-8). He also coached football there with a 5-3 championship in 1980.

Muscato was the linebacking and special teams coach at Buffalo State from 1982-1984 and was defensive coordinator at Dunkirk High School for three years (1986,1988,1989) and helped out with the Marauders' basketball teams that were 62-22 from 1985-1989 with three titles. Also he coached the defensive backs at Mercyhurst College in Erie in 1987.

From 1956-1974, Muscato played in the Dunkirk City Basketball A & B Leagues in Dunkirk and was his team's high scorer three times and played on four title-winning teams in racking up 180 victories.

In softball, he had a lifetime batting average of .300 while performing in the City Softball League, where he played every position except catcher and led his team to 170 wins.

Muscato sent more than 60 student-athletes to college on full or partial athletic scholarships. Among that delegation was Tom Krystofiak,the Dunkirk boys junior varsity basketball coach, who played at Canisius College after an outstanding career at Mindszenty.

Volunteer work had Muscato visiting the elderly and handicapped people regularly while he was involved in the Knights of Columbus charity activities and the Elks Club youth athletic activities.