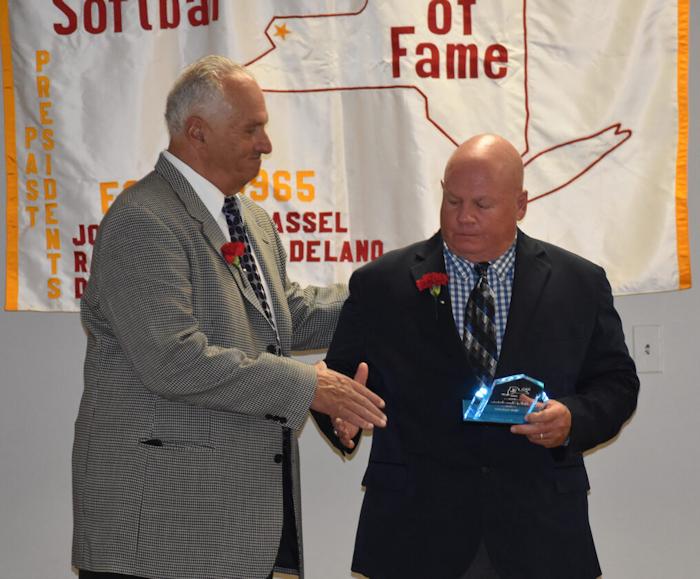 Bob Schmitt, right, is congratulated by Mike Pasquarella, a director of the Western New York Softball Hall of Fame, on Saturday night. Schmitt, a Jamestown resident, was one of 18 people enshrined during the 44th induction ceremony at the Lake Erie Italian Club in Lackawanna. During his softball career, Schmitt was the unofficial coach for the Jock Shop modified team, beginning more than 40 years ago. That tenure was capped by the team winning national titles in 1984 and 1985. Along the way, Schmitt also played hundreds of games in Jamestown, most notably for See-Zurh House in the Social League and, later, for the Jock Shop in the Tim Brown League. He also played for United Church Homes in the city Church League. One of his most memorable performances came against the “King and his Court” when he went 3-for-3 and knocked in four runs in a 4-1 win over the legendary Eddie Feigner. On the baseball diamond, Schmitt coached Frewsburg Central School to state titles in 1991, 1995 and 1996, and compiled a 239-83 record, including 35-10 in the postseason.