The Post-Journal
by Eric Zavinski
January 28, 2019

CELORON — Brad Zimmer recalls days of being a competitive roller skater on a national level and of spending hours at his parents’ Celoron Park and Evans Skateland Roller Rink.

His brother Russ Zimmer was able to pose for a picture with the village’s icon: Lucille Ball. More than 60 years ago, Lucille Ball made one of her anticipated hometown visits and enjoyed what residents of the area had been enjoying all the time she had been gone making “I Love Lucy.”

Celoron Park was an amusement attraction collecting thrill-seekers and recreationalists, and Brad Zimmer was lucky enough to get to stick around for free. His mother, Dorothy Zimmer, managed the park, and his dad, Oscar Zimmer, managed the roller rink.

With this background, Brad Zimmer was a national roller skating competitor in the making, and he ranked highly in several national competitions both with a partner and solo.

The Evans Skateland Roller Rink has a long history, including its newsworthy end when it caught fire after someone accidentally caught several coats on fire after lighting a cigarette. Everyone — including about 300 children attending a Halloween party — was evacuated safely from the burning building, but the rink was saved by natural disaster years prior as well.

Once when Brad Zimmer and his partner were practicing a routine, he unlocked the doors during a storm. He said a tornado blew through the area, causing all the windows to flap open, which relieved a lot of the air pressure. Later, it was discovered that the building would likely have sustained some structural damage if the windows hadn’t been unlocked at the time.

Other landmarks of Celoron Park stick out in Brad Zimmer’s mind too. From the Phoenix Wheel, which used to be the world’s largest Ferris Wheel, to the swing on the island, he got to enjoy them all on a frequent basis. These days, couples can get married on the island, which now sits behind the Chautauqua Harbor Hotel building. Brad Zimmer said he always knew a hotel would spring up along the waterfront eventually.

To spruce up the hotel’s Carousel Bar, he delivered the picture of Lucille Ball riding one of the original ceramic horses during her mid-1950s visit.

In his adult life, Brad Zimmer continued his skating legacy and work ethic developed early when he first sold French fries at his mother’s park. He established the Erie Skateland West roller rink with a co-owner and ran it for 27 years. It’s still in use today as the Presque Isle Skating and Event Center.

Even though his parents and brother have since passed on, Brad Zimmer remembers fondly his days spent with them and at Celoron Park. 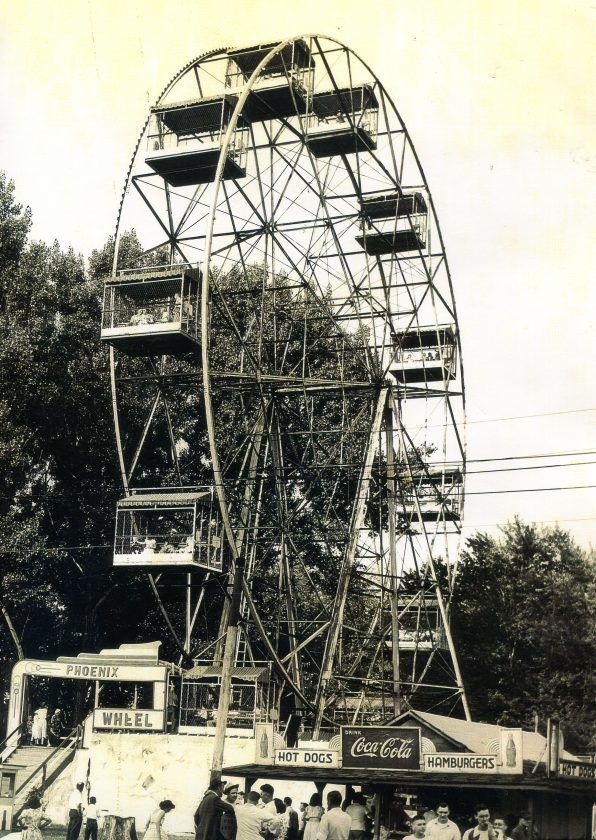