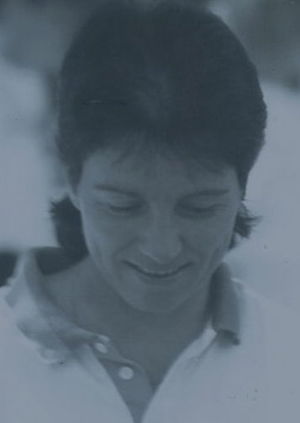 Cathy Farrell
b. 1957
Category
Tennis
Year Inducted
2011
Dunkirk native Cathy Farrell has had a love affair with the sport of tennis since she was just 11 years old and her dedication and accomplishments in the sport have made her a logical choice for election to the Chautauqua Sports Hall of Fame.

Farrell made her mark early during her days at Dunkirk High School where she was the one of the first females to play on the boys' tennis team. She won the 18-Under Western New York/Buffalo Championship Tournament, but that was only the beginning. She worked hard following graduation in 1975 to hone her game, training first with Rauno Suominen in Buffalo. She also spent a year training at the renowned Nick Bolleteri Tennis Academy in Bradenton, Fla., and another year at the Harry Hopkins Tennis Camp in Treasure Island, Fla.

With a high level of training behind her, Farrell broke into the women's satellite tennis circuits during the 1970s in Brazil and England and played in qualifying tournaments for the U.S. Open and French Open in singles and also played in qualifying rounds for Wimbledon doubles, coming within one match of playing against Chris Evert. She played on the United States Tennis Association (USTA) satellite circuit and the Avon Futures Tour, touring the U.S. and Canada. Farrell finished in the top 10 of the Nike Circuit and reached the Masters doubles finals in Saratoga. In 1989, she was the runner-up in the National 30 Indoors Tournament and won the Arthur Ashe Tennis Classic at Flushing Meadow. Her highest international ranking was 202nd in 1980 and was ranked 237th in the Woman's Tennis Association (WTA) back in 1983.

In 1994, Farrell was ranked ninth in the 35s Open Singles and No. 14 in doubles with Shelby Torrance of Corpus Christi, Texas, and has played in the annual National 35s tournaments in Philadelphia and Phoenix. She has also competed in the Chautauqua County Adult Tennis League.

She came home to Dunkirk to work for her family's construction and roofing business after "retiring" from professional tennis, but has remained involved in the sport to this day. Farrell was elected to the Buffalo Tennis Hall of Fame in 2006.