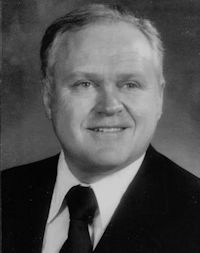 Charles (Chuck) William Johnston, 87 years old of Brocton, NY passed away early Thursday morning, March 2, 2017 at his home. He was born in Reynoldsville, PA on Feb. 18, 1930 and was the son of the late Charles and Thelma Gunns Johnston. He has lived in this area most of his life. He was a graduate of Erie East High School of Erie, PA and received his Bachelors of Science Degree in Physical Education from Florida Southern and his Masters of Science Degree in Earth Science from Penn State University. Chuck was also a Korean War Veteran, serving his country in The United States Air Force from 1950 to 1954. He was a retired Earth Science Teacher for the Fredonia Central School District. Chuck was also, for many years, their Tennis Coach, Football Coach and Basketball Coach. In 1983 he was honored by being named the High School Tennis Coach of the year from District 1. He was a former member of the Fredonia Beaver Club, The Chautauqua Tennis Club, The American Legion John W. Dill Post 434 of Brocton, NY and was past president of the Fredonia Teachers Union. Besides his family, Chuck loved Florida, Bear Lake and Photography. He also enjoyed traveling, going to Australia, Switzerland, the British Isles and New Zealand.

Funeral Services will take place on Saturday, March 4, 2017 at 2 p.m. at the Brocton, Baptist Church, 33 West Main St. in Brocton, NY. The Rev. Larry Morrison will officiate. Military Honors will be accorded Chuck by the American Legion John W. Dill Post 434 of Brocton, NY where the American flag will be presented to his wife, Kay, by their son, Brian, at the completion of their service. Interment will be private. In lieu of flowers, the family requests memorials in Chuck’s honor be kindly made to the American Legion 434 of Brocton, 110 W. Main St, Brocton, NY 14716.To leave a message of remembrance or condolance for Chuck’s family, please log on to themorsefuneralhome.com. Funeral arrangements were provided by the Morse Funeral Home of Brocton, NY.