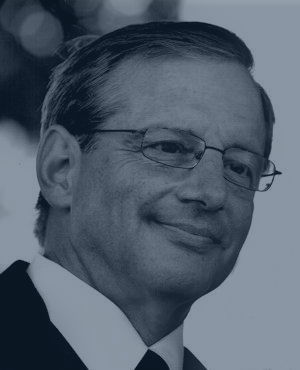 EDITOR'S NOTE: The following article by Scott Kindberg originally appeared in The Post-Journal on June 10, 2007.

BINGHAMTON — The celebration was over, the hugs had been exchanged and the pictures had been taken, but it was hard to ignore the symbolism in the area around the batter's box at Conlon Field.

Placed ever so neatly in the dirt behind the plate were the black spikes belonging to Derek Austin, Pine Valley's senior catcher.

But they weren't going anywhere.

In Austin's eyes, they were, well, right at home.

"I always thought about it," said Austin, standing on the infield grass near the pitcher's mound late Saturday afternoon in his purple uniform socks, "especially being my last high school sport. I'm never going to need them again."

Like all of his teammates, Austin left everything he had on the field and, for the first time in school history, a boys team is bringing home a state championship to South Dayton.

Kyle Armstrong's ringing single to left with one out in the bottom of the seventh inning scored Austin with the winning run, lifting Pine Valley to a 2-1 victory over Chapel Field of Section IX in the New York State Public High School Athletic Association Class D championship game.

"It's a dream," Panthers coach Charlie LaDuca said. "You want to believe, but in the back of your mind, you think, 'What are the odds?'"

For the Panthers, they were pretty good. No, check that. They were the best.

Senior Jon Howard tossed a three-hitter, struck out seven and walked two in another brilliant outing, and he received just enough offensive support to earn the win after posting a save in the Panthers' 5-1 semifinal victory over Brushton-Moira of Section X earlier in the day.

But were it not for Armstrong, affectionately known as "Tank," there's no telling how long the game would have gone.

"He doesn't look like a super athlete," Austin said of his stocky teammate, "but he can jump, he can throw and he can do it with the best of them."

So after Austin beat out a base hit to shortstop to lead off the seventh inning, Armstrong was the person LaDuca wanted at the plate with one out.

And Austin is a great base runner.

For after stealing second base, Austin had little trouble motoring around third following Armstrong's laser off losing pitcher Joe Schlegel.

"I was nervous," Armstrong said. "I can't explain how it feels. I hadn't had a hit all day, so I wanted to get one."

The hit ended a pitcher's duel between Howard and Chapel Field's Schlegel, who scattered four hits and fanned five. In the end, it may have been the Panthers' businesslike approach to its Final Four trip that was the difference.

"We talked about it all year," said LaDuca, who took teams to the states in 1997 and 1998, but never won. "The thing that always kills you is the lack of maturity. I told them to trust my lead and we'll get there."

Pine Valley opened the scoring in the fourth inning when Howard beat out a bunt for a hit and advanced all the way to third following throwing errors by Danny Menendez and Mark Schaper on the same play. Dylan Ellis' groundout scored Howard to give Pine Valley a 1-0 lead.

Chapel Field scored an unearned run to tie the game in the fifth when Mike Sofia worked out a two-out walk, stole second and scored on an error.

The score remained 1-all until the bottom of the seventh, but the Lions let a golden scoring chance slip away in the top of the inning.

Menendez led off with a single to right and he stole second base. But on the very next pitch, Austin cut him down trying to swipe third. Howard struck out Sofia to end the inning.

"I didn't expect him to go," Austin said. "That did change the pace of the game. That was a big momentum shift."

In the bottom of the seventh, Austin and Armstrong saw to it that they weren't about to let it slip away.

"You start dreaming about it March 1 and to have it come true is unbelievable," LaDuca said.

LaDuca had a sneaking suspicion that the kids in purple and gray were ready to play in the semifinal earlier in the afternoon.

In fact, he knew as early as Friday night.

Our guys were so good," the Pine Valley coach said. "Other kids were running around the halls (of the hotel), but our guys were so serious it was amazing. They're buying into what I'm telling them to win states.

Denied in two other trips to the Final Four, LaDuca's kids were clicking in all phases of the semifinal, highlighted by Codi Vanzile and Howard, who combined on a three-hitter, as the Panthers turned in a baseball clinic with a 5-1 victory over Brushton-Moira.

"We're really focused," LaDuca said. "They felt it and they don't want to be denied."

That was evident by the mature manner in which they went about dispatching the Section X champs.

After falling behind, 1-0, following Justin Pointer's RBI double in the second inning, Vanzile buckled down and allowed just one more hit before giving way to Howard with two outs in the fifth. The ace right-hander retired seven of the eight batters he faced and was aided by a diving catch in center field by Bryce Cortwright for the first out in the sixth.

Meanwhile, Pine Valley's offense did just enough to advance to the state final against Chapel Field, scoring a run in both the second and fifth and then tacking on three critical insurance runs in the bottom of the sixth.

In the second, Jeremy Sommers drew a leadoff walk, went to second on a single by Rob Lindquist, who did a nice job breaking up a double-play attempt on Austin's groundball, which allowed Sommers to score from second.

In the fifth, Austin was in the middle of the rally again as he led off with a single and promptly stole second base. He moved to third on Armstrong's one-out single and scored on Vanzile's sacrifice fly on a no-ball, two-strike pitch.

The score remained 2-1 until the bottom of the sixth when the Panthers tallied three runs and eventually chased Brushton-Moira's starter Justin Supernault.

Cortwright led off with a hard single to center and, one out later, advanced to second on an infield hit by Lindquist. Brandon Young came on in relief of Supernault, but was the victim of a two-out error that allowed Cortwright to score the third run.

Lindquist later scored on a wild pitch and Austin raced home with the final tally on an infield single by Dalton Kashmer.

That was more than enough for Howard, who retired the side in order in the seventh.

The celebration was low-key after the senior right-hander struck out the final batter. He knew he still had work to do and history to make.

"It's been something we've talked about for a long time," Howard said.

Now the boys can add a state championship plaque in the school's trophy case, joining the many that the Pine Valley girls basketball team has claimed in the last two decades.

"God bless the girls," LaDuca said. "We've cheered them on, and now the boys have done it. They've worked really hard." 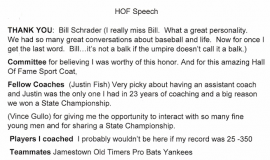 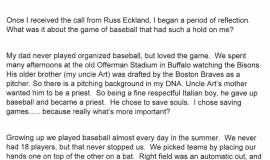 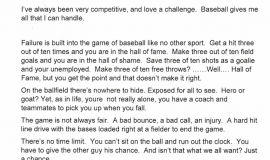 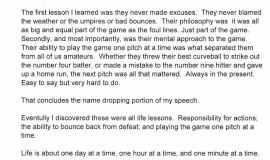 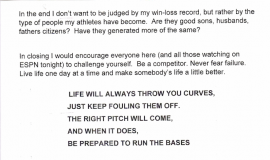 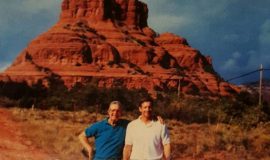 During a trip to the Men’s Senior Baseball League World Series in 1994, Charlie LaDuca, right, and his father, Sam, pose for a photograph at Bell Rock in Sedona, Arizona. 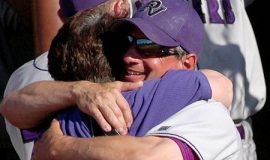 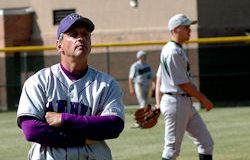 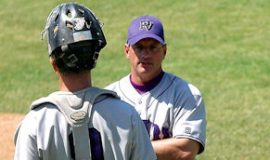 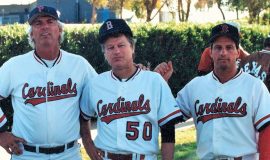 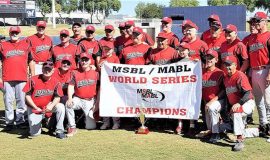 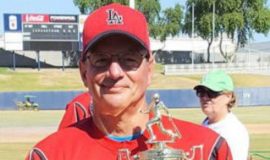 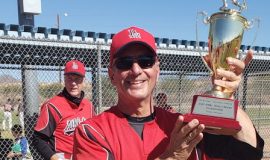 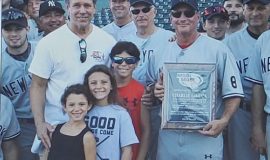 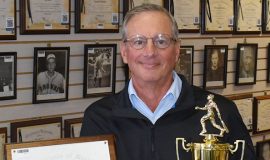 Charlie LaDuca shows off the Men’s Senior Baseball League Father/Son World Series championship trophy during a visit to the Chautauqua Sports Hall of Fame in Jamestown on November 10, 2021. 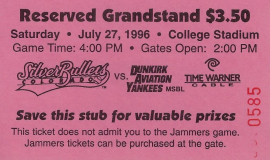 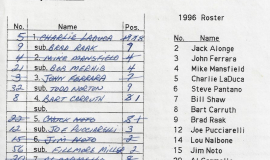 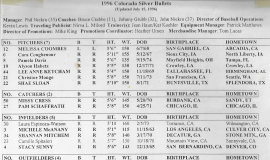 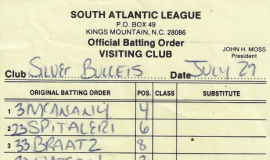 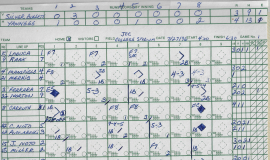 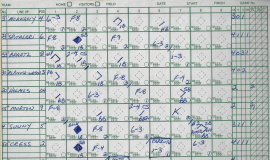 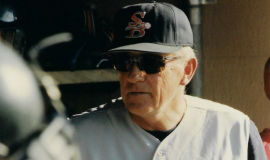 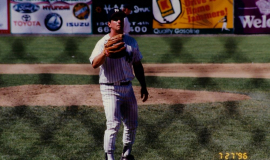 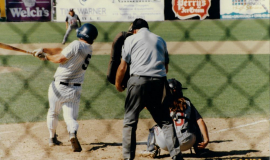 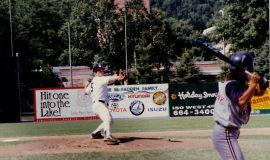 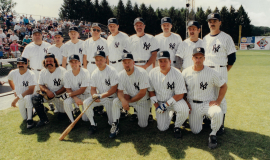 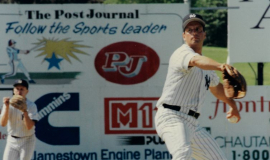 See the following publications for more about the game:

CSHOF inductee Charlie LaDuca uses his vast experience as teacher, coach, and player to list the ingredients and proper blending of them necessary to guarantee success in his book Baseball Is Life Is Baseball: Winning On and Off the Field.

Baseball Is Life Is Baseball was inspired by a magical high school baseball season culminating in a State Championship. The lessons learned along the way serve as a recipe for success both on and off the field. The author uses his vast experience as teacher, coach, and player to list the ingredients and proper blending of them necessary to guarantee success. This is not a book of baseball fundamentals. It is about the many qualities other than fundamentals needed to take your team or personal life to the next level. Interwoven with detailed practical information are stories and experiences bringing these qualities to life. You will find yourself laughing and perhaps crying at times as you take this journey designed to lift you up and bring out your best.

Baseball Is Life Is Baseball is available on Amazon for just $14.99. 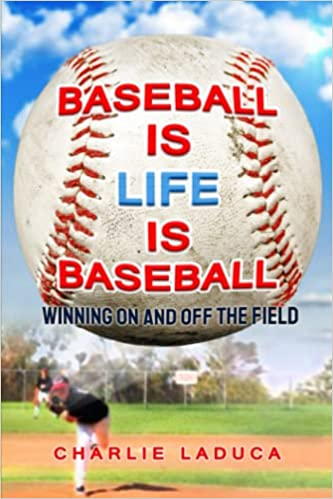