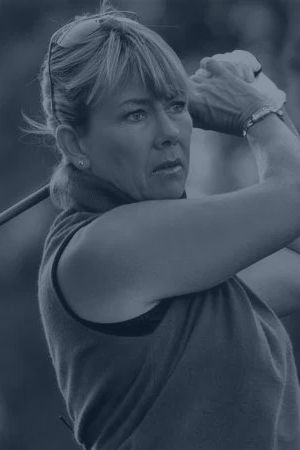 Cindy Miller's life is golf, but that golfing life had a late start. Miller made up for lost time and became a successful player and now is one the top golf teachers in the nation.

Miller, then Cindy Kessler, was born in Dunkirk and moved to Blasdell in the eighth grade. She graduated from Frontier Central School before she moved back to Silver Creek.

At Frontier, Miller played a little basketball and swam, but was not a letter winner. She did excel in music, playing the clarinet and made the all-county and all-state band a couple of times.

About the same time that Miller was a star with the clarinet, she became interested in golf and that has become her life.

Miller wasn't introduced to golf until she was 15. Her parents were members at Tri-County Country Club, where they played every weekend.When Miller was 17, her mother and some friends took her to the Niagara Frontier Classic LPGA tournament at River Oaks Country Club at Grand Island.

"That is when the dream was born," Miller recalls.

She attended Fredonia State for one semester and played a couple of matches on the men's golf team.

Miller wrote to Golf Digest to see if they had a list of colleges with women's golf programs, which at that time were rare, and she was sent a list. Miller contacted the University of Miami and asked if she could be on the team. Miami said she wasn't good enough, but she was welcomed to try to make the team as a walk-on.

Miller took the challenge and headed to the Florida campus. She practiced, practiced and practiced some more and earned a scholarship for her last three years at Miami. She was the team captain for two of the Hurricanes' national championship teams in 1977 and 1978 and graduated as an All-American.

Not long after that, Miller won the 1978 New York State Women's Amateur.

In 1979, Miller picked up her first professional win in the Lake Chabot Women's Open on the Women's Professional Golf Tour. Then she qualified for the LPGA Tour and competed there from 1979 to 1981 and also went on to play in five U.S. Women's Opens.

When Allen retired in 1986, Miller moved back to Silver Creek and began a successful teaching career at the Wehrle Dome in Williamsville. In 2001, 2006, 2007, 2008, Miller was named among the Top 50 Teachers in the Country by Golf for Women Magazine. In 2010 she was named the LPGA National Teacher of the Year.

Miller became a "TV star" in 2005 when she appeared on Golf Channel's Big Break III: Ladies Only. She was 48 and competing on the reality show with nine other golfers in their 20s and 30s. During an interview to make the show, Miller was asked why Golf Channel should pick her.

"I'll tell you why you should pick me," Miller said. "If you're trying to make the viewing audience of the Golf Channel become middle-aged women, I'm the perfect candidate, I'm 48 years old, I'm married with three children, I played on the LPGA Tour, my husband played on the PGA Tour and, by the way, we're the only couple in the world that are married that have both played on the real tour and the senior tour. We have the family challenges. I am a normal, typical person who happens to have a golf skill. In fact, I could be your miracle story and the light of the show. That's why you should pick me."

Miller was the miracle story as she outlasted most of the 20 and 30-somethings and made it to the final three before being eliminated on the next-to-last show.

Plenty of people learned about Miller because at that time Big Break III was the highest-rated show ever on Golf Channel.

When Golf Channel made plans for The Big Break VII: Reunion featuring 16 former participants, Miller was chosen. That's because there is a wall of photos of past Big Break participants at Golf Channel and one of the network's executives saw Miller's photo and said, "We have to have her back."

Miller was eliminated on The Big Break VII on the first episode when she lost in an elimination challenge that involved hitting an 82-yard bunker shot.

"An 82-yard bunker shot is the hardest shot in golf," Miller said.

The Big Break series just completed its 20th edition, but Big Break III is still the top-rated Big Break show and is one of the few that has a DVD set.

The golf theme doesn't stop in the Miller family with the parents. Their daughter, Kelly, works for Golf Channel while a son, Jamie, played golf at Ohio State and Augusta State and is a financial advisor. Another son, Matt, has a masters degree in sports management. 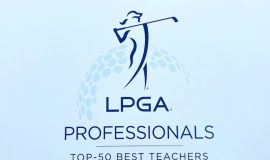 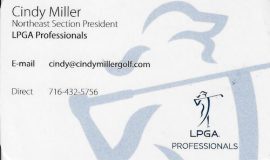 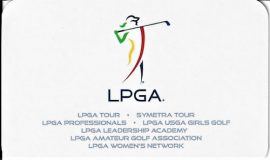 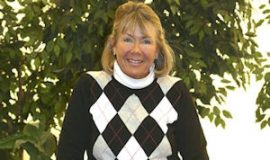 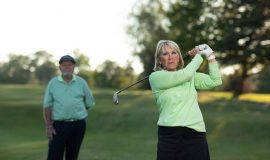 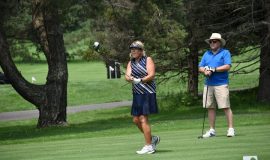 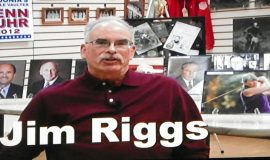 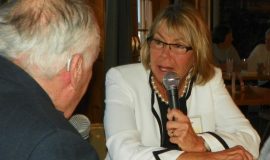 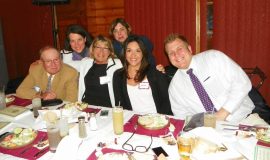 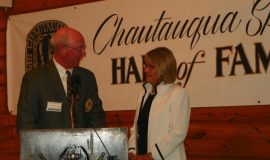 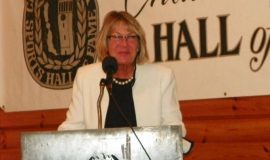 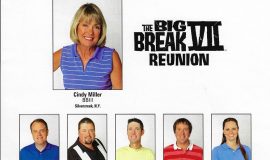 The Big Break VII Reunion appeared on The Golf Channel in 2007. 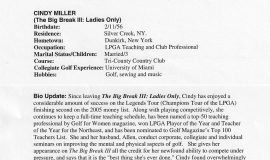 Cindy Miller is introduced at the CSHOF induction banquet by Jim Riggs.