The Post-Journal
by Scott Kindberg
January 20, 2018 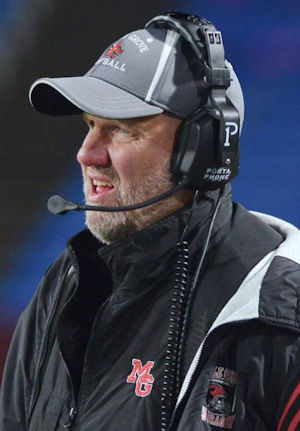 Curt Fischer will be inducted into the Chautauqua Sports Hall of Fame next month in recognition of coaching excellence at Maple Grove Junior-Senior High School spanning more than a quarter century.

If he intends to build on that resume moving forward, however, he’ll have to do it somewhere other than on Dutch Hollow Road.

The coach with 221 career football coaching victories and two state titles to his credit since arriving on the Maple Grove campus in 1992 — not to mention two state championships in basketball and one in baseball — has resigned.

Fischer, 54, made the announcement to leave his head coaching positions in basketball and football on Friday morning.

“They say with every ending there is a new beginning, and after 25 years it is time for a change,” he wrote in an email to The Post-Journal. “It is with a heavy heart that I announce the end of my coaching career at Maple Grove High School. Over the last 25 years a lot has changed, but my love for the students and community that backed me will not. State titles and awards have never been the reason for my love of coaching. The ability to watch students develop from the little brother or sister watching on the sideline to student-athlete and achieve success in their lives is an honor that will remain with me for life.” 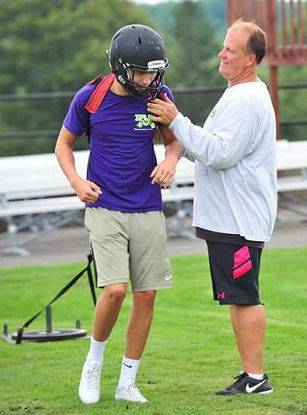 “Regarding Mr. Fischer’s status as football coach. As per the collectively negotiated agreement with our faculty association, all athletic coaching positions are posted annually and the District appoints all athletic coaches on an annual basis. Coaching positions for the fall season, including varsity football, are posted in May and generally appointed at the June Board of Education meeting. As such, no decision has been made regarding the varsity football coaching position. However, it is our understanding that Mr. Fischer intends to step away from coaching to spend more time with his family.

“The Bemus Point Central School District deeply appreciates Mr. Fischer’s commitment to our student athletes throughout his career and wish him well in the future.”

Ironically, the announcement was not only made in the middle of the basketball season — Fischer, the married father of two student-athletes, had taken a leave of absence from the team two weeks ago — but it also comes less than two months after he guided the Red Dragons to their second consecutive New York State Public High School Athletic Association Class D championship game appearance at the Carrier Dome in Syracuse.

“Accepting blame and ridicule is part of coaching and something I took in stride for many years, but now that my children are part of the process it is time for me to become a father and not a coach,” he said in his statement. 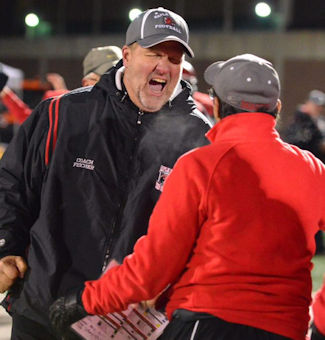 Fischer’s coaching accomplishments are impressive. After taking over the Maple Grove football program in 1992, Fischer posted a 221-45 record, good for fourth on the Section VI career coaching wins list; won nine sectional titles, including two as the merged Maple Grove/Chautauqua Lake team in 2014 and 2015; claimed state championships in 1998 and 2008 when he finished 13-0 both years; and had just one losing season — 4-5 — in 2003.

Fischer, a 1981 graduate of Falconer Central School, also coached the Red Dragons’ varsity basketball team, beginning in 2004, highlighted by NYSPHSAA championships in 2008 and 2010; and has also coached softball and baseball, winning a state title in the latter while serving as the interim varsity head coach in 1992.

“I wish my successors much success in continuing the winning tradition on and off the field,” he said. “I wish the school administration the best and thank them for the last 25 years. The future success of the football and basketball programs will take support and backing of the administration as well as our student-athlete (families), so I hope changes can be made. I want to express my deepest thanks to all that have become a positive part of my life. I will hold onto those memories to drive my coaching enthusiasm into the future.”

Fischer is among a group of eight who will be inducted into the Chautauqua Sports Hall of Fame at its banquet on Feb. 19 at the Lakewood Rod & Gun Club. Joining him in the Class of 2018 are Dick Cole, Lori Franchina, Sheilah (Lingenfelter) Gulas, the late Jim Riggs, Fran Sirianni, Clem Worosz and Phil Young.

“We look forward to the induction of Curt Fischer and the other seven honorees,” CSHOF president Randy Anderson said. “His athletic resume at Falconer Central School and his outstanding coaching resume at Maple Grove make him a worthy member of the Hall of Honor.”