The Post-Journal
by Scott Kindberg
August 31, 2017

Feather’s Legacy Lives On In Race

Ron Graham, Jamestown High School Class of 1966, was asked to describe what made Dan Feather, Class of ’65, tick.More than 50 years have passed since the two competed for the Red Raiders on the old cinder track behind JHS, but Graham needed no prodding when talking about his late friend.

“Back then, I don’t recall the track team having captains,” he continued, “but Dan was just the leader of the team. … He never had a lot of verbiage. He was kind of soft spoken, but you respected him and he led by example, especially when it came time to compete.”

In a career that spanned 34 years — from grade school through state police and international police Olympics — Feather found his way to the medal stand with regularity, ultimately earning him induction into the Chautauqua Sports Hall of Fame in 1993, less than a year after suffering a brain aneurysm and dying at the age of 44.

“I remember one day, and it has stuck with me all these years,” Graham said. “We used to practice at the back of the high school on the track and the last thing you wanted to do was fall. We were having a workout one day. I was working on the hurdles and Dan was running some sort of intervals. … I hit a hurdle and fell. I impaled myself with cinders. I’m sitting there and I’m not crying, but it hurt like hell. I was picking cinders out of my leg and I was mad.

“Dan runs past me, stops and says, ‘Are you going to stay down there? Get up.'”

In other words, Feather, who went on to be an 18-year member of the Jamestown Police Department, didn’t demand victory, but — barring injury — he demanded effort.

“I’ve carried that mindset with me,” Graham said. “Just compete. If they beat you, just go over, congratulate them and tell them they must be good, because they beat you today.”

So fast-forward to Sunday. About 150 runners are expected to toe the start line on Baker Street at

Bergman Park for the 25th annual Dan Feather Memorial 5K Run and Walk, an athletic endeavor that has become synonymous with the city’s Labor Day Festival.

Originally the brainchild of Kendall Club PBA board members Tom Shea, Jim Fye and Brad Meyers, the Feather Memorial was held at Jefferson School for the first three years, running through Allen Park and finishing with one lap around the track at Strider Field.

Shea said that several Buffalo police officers who were friends of Feather came to Jamestown in those early years, but found the Allen Park venue too difficult.

“Those Buffalo cops called it the ‘Mountain Goat Course’ because of the hilly terrain,” Shea said.

The course was eventually moved to the Bergman Park area, running past Persell and Fletcher schools in the fourth year, and that’s where it’s remained since.

“Those two Buffalo cops were happy with the change in the 5K race course,” Shea said. “On a scale of 1 to 10, with one being runner friendly and easy to run, and then 10 being extremely difficult, they always said that the original course was a 10, and the new course at Bergman Park was a 4.” 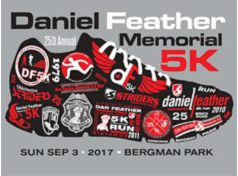 “In 1999 or 2000, the Striders got involved and pulled it under the Striders’ umbrella,” said David Reinhardt, Feather Memorial 5K race director. “Dan was the co-founder (with Graham) of the Chautauqua Striders and he just meant so much to the organization. We want Dan’s legacy to continue on. Fortunately, this race has gone on for 25 years.

“The proceeds go directly back to what the Striders is all about, which is helping young people through the sport of track and field and athletics. It’s our way of continuing what Dan wanted to see in this community.”

When the start gun goes off — Dan’s brother, Mel, has done the honors for years — Randolph native Brooke Adams, a multiple-time winner, will be the favorite yet again. On the men’s side, the winner could come from several different individuals.

Reinhardt pointed out that former Striders, including Jason DeJoy Savantuay Boyette and Travis Prejean, have come away with first-place honors.

“It’s (fun) seeing some of the kids who have gone through the program and come back while they’re still (competing) and running the race,” Reinhardt said.

Reinhardt also noted that entire families — from very young to middle age — have made it part of their Labor Day celebration.

“The race has really become our ‘Fall Classic,'” he said.

Sunday’s race will begin at 9:30 a.m. Same-day registration will be held from 8-9 a.m. Competitors who register by 4:59 p.m. Saturday at www.chautauquastriders.org will receive a goodie-bag and a custom-made T-shirt. Designated as a 5K diamond race, it offers double points toward the Runner of the Year Series.

“The Feather family has been so supportive of the Striders and this race,” Reinhardt said. “Verna (Feather’s widow) is coming back into town this year and she’ll be presenting the top male and female officers with special awards.”

Graham believes everyone in the field will be a winner on Sunday just because they showed up to run.

Feather would have approved.