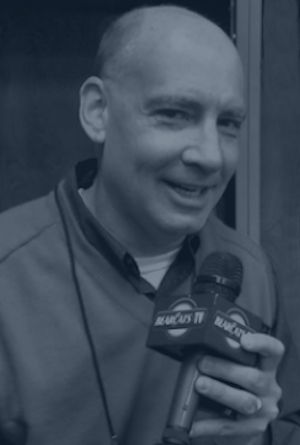 Dan Hoard
b. 1963
Category
Media
Year Inducted
2016
Dan Hoard was born to be a broadcaster.

"I joke that when the doctor pulled me out of my mother's womb and slapped me on the behind, I said, 'That's 15 yards for unnecessary roughness.'"

It's been figurative touchdowns, buzzer-beaters and walk-off home runs ever since for the Jamestown native and 1981 Southwestern Central School graduate.

"I have no complaints," Hoard said. "I tell people I've never worked a day in my life."

In other words, he's always considered his job a labor of love.

Maybe it was due to the fun he had making play-by-play recordings of imaginary games on cassette tapes from his bedroom growing up. Or maybe it was learning from watching New York Mets television broadcasts on WOR-TV. Or, quite possibly, it was the public-address work he did for Southwestern sporting events and his role on the school's debate team.

"I did anything I could think of to do, and it has paid off," he said.

In 2015 Hoard was named Ohio Sportscaster of the Year by a group of his peers. He received the award in June from the National Sportscasters and Sportswriters Association & Hall of Fame.

"Really, I was very surprised," he said. "I received word by phone call. I had learned that I had been nominated for the award and that, in and of itself, was a big surprise. I didn't think there was a chance at all that I'd win."

But being included among the Mount Rushmore of Ohio's announcers is only part of Hoard's lengthy resume.

Following are a few additional highlights:

"I admired the broadcasters growing up as much as the athletes," said Hoard, who named former Buffalo Bills broadcaster and Chautauqua Sports Hall of Fame inductee Van Miller as one of his favorites

Hoard, who used to commute between Pawtucket and Cincinnati, is now settled permanently in Cincinnati with his wife, Peg Rusconi, and their son, Sam.

"When I was doing Pawtucket and University of Cincinnati games, I was on the road 200 days a year for the first five years of my son's life. (The move to Cincinnati full time) has worked out great for my family, and professionally it's been tremendous."

Given all those credentials, Hoard, the son of Larry Hoard of Jamestown and Diane Bailey of Chautauqua, didn't hesitate when asked about his most memorable moment in 30 years of broadcasting.

Here's the story: Hoard and his color analyst, Chuck Machock, were working the 2003 NCAA men's basketball tournament first-round game between Cincinnati and Gonzaga.

"Bob Huggins (the Bearcats' coach at the time) got kicked out and the official that ejected him happened to come right over to where we were broadcasting the game to put the ball back in play," Hoard said. "My partner was so incensed that Huggins had been ejected that he stood up on press row and began yelling at the official.

"The official turned to him and said, 'Buddy, keep it up and I'm going to kick you out, too.' That was all Chuck needed to hear and he stood up and began riding the official as I was trying to pull him back in his seat.

"At the next dead ball, I see security walking and pointing in our direction."

Before Hoard and Machock knew it, the security guards told Machock that he had to leave.

"Buddy," Hoard remembered the security guards saying, "the NCAA wants you out of here."

"To this day, when I sign off a University of Cincinnati basketball broadcast, the last thing I say is: 'For my partner, Chuck Machock, who tonight extended his consecutive game streak without being ejected to (fill in the blank), I'm Dan Hoard.'"

At last report, Machock's ejection-less streak stands at well over 200.

"Chuck is the best," Hoard said. "He's a tremendously funny person, in general. He takes it as well as he gives it."

Maybe that's why the pair get along so well and, maybe, just maybe, Hoard is describing himself.

"It's nice when reality exceeds your dreams," he said. 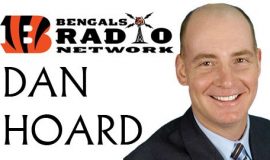 Dan Hoard, the radio play-by-play voice of the Cincinnati Bengals. 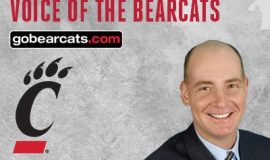 Dan Hoard, the radio play-by-play voice of the University of Cincinnati football and men's basketball teams. 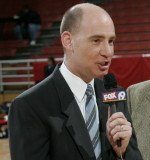 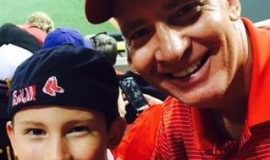 Dan Hoard with his son, Sam. 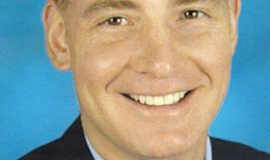 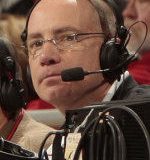 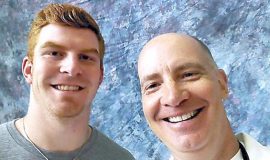 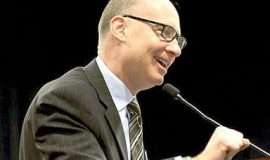 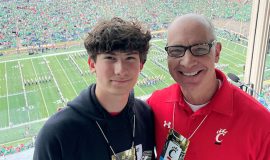 Inductee Dan Hoard broadcasted the Cincinnati Bearcats upset win over Notre Dame on 10-2-21. The photo shows Dan and his son Sam at Notre Dame Stadium prior to the game. 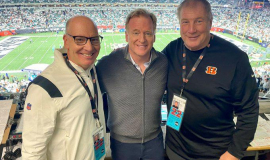