The Post-Journal
by Scott Kindberg
September 22, 2014

BUSTI - As Dick Barton sat in his Super Late Model car at the start line at Stateline Speedway on Saturday night, he took a moment to look around. 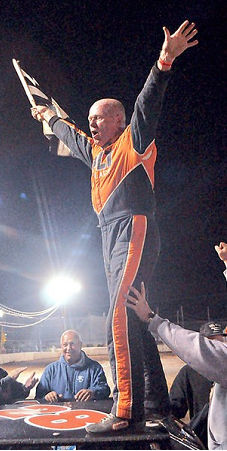 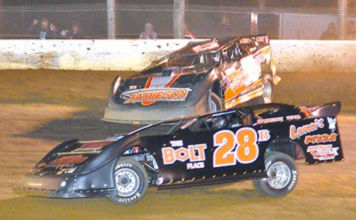 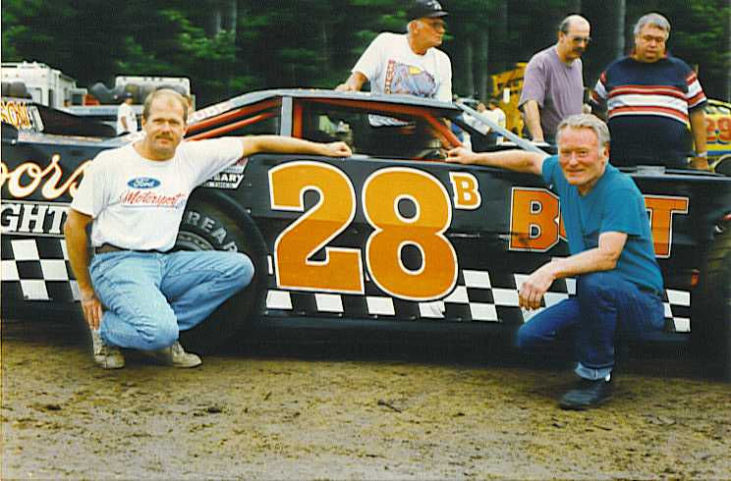 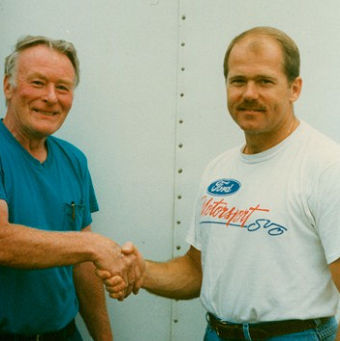 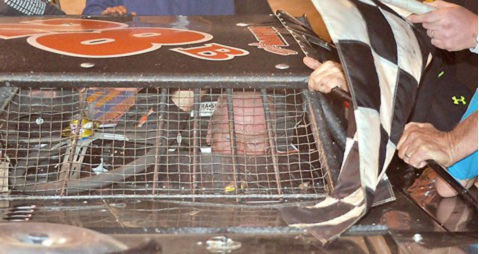 The photos above depict not only some of the action during Dick Barton’s history-making Super Late Model victory in the Julian Buesink Memorial at Stateline Speedway on Saturday night, but also time spent with another legendary area driver, Bob Schnars. From the top, Barton celebrates after winning his 80th SLM victory at Stateline, which broke a tie with Schnars; Barton takes a victory lap; Barton takes the lead on the next-to-last lap; Barton poses with Schnars in front of his 28B car years ago; the two legendary drivers shake hands; and Barton prepares to leave his retro car after his record- breaking win.
P-J photos by Scott Reagle P-J file photos.

"There were a bunch of absolutely great cars,'' he said, "and I figured if I could pull a top five out of this I would be really happy."

Less than a month shy of his 60th birthday, Barton did even better.

Piloting a throwback car representing a golden era in his career, Barton took the lead with one lap remaining of the Julian Buesink Memorial and held off Chris Hackett to the checkered flag. The victory represented Barton's 80th at Stateline, surpassing the legendary Bob Schnars for the all-time track record.

"You couldn't have scripted this any better,'' Barton said Sunday morning.

Three weeks after tying Schnars with win No. 79, Barton ended the 2014 Stateline season with the memorable win, setting off an uncharacteristic animated celebration by the veteran driver.

"I let loose,'' Barton said. "All that was stored over a number of years, I let it go. It may be, may be my last race. I don't know. I have to talk to the guys and see if they're still interested in going on. I have no clue.''

But one thing is certain about Barton's weekend: He'll never forget it.

It started on Thursday when his children - Aaron and Andrea - stunned Barton and his wife Joan with a surprise birthday party in Bemus Point; it continued Friday at Stateline when owners John and Charlie Lacki remade the car to resemble Barton's old Bolt Place SLM that he drove for Meadville businessman Ron Nielson; and then it was capped with the record-breaking win Saturday night.

"I'd be lying if I didn't tell you that (the record) hadn't been weighing heavily on all my team,'' Barton said.

And, Barton emphasized, it was a true team effort, dating back more than 35 years.

"John Lillie, Del Seekings and Gary Zepka asked me to drive their car in 1980,'' Barton said. "I had quit racing, but those three asked me to drive (again). Then John Lamb came on board that year and John is the only guy that's been with me since Day One. I can count on one hand the races he's missed in all these years.''

"I've been getting a ton of congratulatory texts and I appreciate everybody's thoughts, but, once again, this is a total team effort," Barton said. "The only thing that bothers me about this is that all the guys who have been with me through the years couldn't be there for the (post-race) picture.''

Barton also took time to pay tribute to his wife, their children and the reset of his family who got him involved in racing as a kid.

"It was mentioned to me (Saturday), 'Dick, your mom is smiling,''' Barton said of his late mother, Oleta. "And my dad (Clarence) tirelessly took me go-karting every weekend and my uncle, Rod, put his racing career on the back-burner to help get me going. There are just so many people over the years it's just impossible to mention them all, but I know mom and dad are looking down and smiling. I would hope they were proud of me."

While Barton isn't sure if he'll continue his racing career next year - "There's no decision when you're numb,'' he said with a laugh - Barton and his wife are planning a motorcycle trip to the Appalachian Mountains this week.

"If it's supposed to rain (in that area), we could end up in South Dakota for all I know,'' Barton said.

After having unmatched success making left turns during his storied career, the Chautauqua Sports Hall of Famer is entitled to a change in direction.