Union, Kentucky – The Officers of the Board of Trustees and the Voting Members of the National Dirt Late Model Hall of Fame are very pleased to introduce the 2020 induction class. The Induction Ceremony set for August of 2020 in conjunction with Florence Speedway’s North South 100 will mark the 20th Anniversary of the institution which is located on the grounds of the Speedway in Union, Kentucky. The class made up of 5 drivers and 3 contributors to the sport was announced to during this past weekend’s Dirt Track World Championship at Portsmouth Raceway. Along with the inductees 2 Lifetime Achievement Awards will be presented. 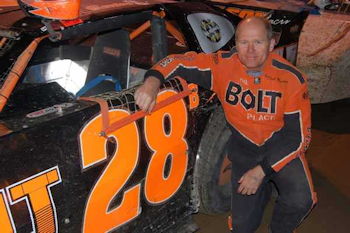 The NDLMHoF 2020 class is led by drivers: Dick Barton, Ashville, N.Y.: A legendary standout on the famed Stateline-Eriez circuit in western New York and Pennsylvania, the retired Barton racked up 47 career track and series titles and reigns as the winningest driver at Stateline Speedway in Busti, N.Y. He scored more than 225 career feature victories at 14 tracks in four states, including STARS (1991) and World of Outlaws (2006) victories at Stateline, where he was a 10-time champion. Amid a career stretching longer than 40 years, Barton’s heyday came driving the The Bolt Place-sponsored No. 28B owned by Ron Nielson that he steered to 172 victories from 1993-2009. His 80th career Stateline victory in 2014 (at age 59) broke the 79-victory mark of Bobby Schnars. Major non-Stateline victories included 1996’s Budweiser 101 at Eriez Speedway in Hammett, Pa.; 2003’s Fall Classic at Raceway 7 in Conneaut, Ohio; 1994’s Race of Champions at Hagerstown (Md.) Speedway; and 2002's MACS Fall Fest at Challenger Raceway in Kent, Pa., his richest victory at $15,000.

Kevin Claycomb, Vincennes, Ind.: The driver for a tight-knit family that operated Prestige Auto Service on weekdays and barnstormed Midwestern dirt tracks on weekends was one of the Hoosier State’s most successful racers during a 25-year career that included a 1991 UMP (now DIRTcar) crown. With father Bill building engines, brother J.R. turning wrenches and mother Barb providing support with other family members and friends, Claycomb was a two-time UMP runner-up before capturing his title during an 87-race season. Claycomb, now 59, scored his first major victory in 1986 by overtaking Billy Moyer on the final lap of the Thrush 100 at Tri-State Speedway in Haubstadt, Ind., and went on to hundreds of feature victories. Major wins for his family-owned team came at Brownstown (Ind.) Speedway for the Kenny Simpson Memorial (1993 and ’99), at Richmond (Ky.) Raceway for the Butterball Wooldridge Memorial (’91), at Paducah (Ky.) International Raceway for the USA World 50 (’96) and at Florence Speedway in Union, Ky., for the Spring 50 (1996). The family team shut down after the 2004 season, but a 47-year-old Claycomb got behind the wheel again for Scott Clippinger Racing in ’08, adding another Florence Spring 50 victory and a DIRTcar Summer Nationals triumph at Paducah, his career fourth on the tour. He was a four-time World 100 starter with a best finish of 11th in 1987.

Terry English, Benton, Ky.: The richest UMP weekly champion ever with 2002’s $100,000 points fund windfall coming after a 44-victory season, English dominated at Kentucky Lake Motor Speedway and Paducah International Raceway for years as the generation’s best western Kentucky dirt racer. His six-figure payout came amid UMP founder Bob Memmer’s most lucrative season and followed a 2001 campaign when English won an astounding 34 features in 41 races. Along with his weekly domination from the late 1990s through mid-2000s, the now 57-year-old English captured major victories including 1999’s Magnolia State 100 at Jackson (Miss.) Motor Speedway, 2000’s Ice Bowl at Talladega Short Track in Eastaboga, Ala., and 2005’s Hoosier Dirt Classic at Brownstown (Ind.) Speedway. He was a four-time winner of Paducah’s USA World 50 (’98, ’00, ’02 and ’04), five-time winner on the DIRTcar Summer Nationals and two-time winner on the Lucas Oil Late Model Dirt Series, where he finished fifth in the 2007 standings. His first Lucas Oil victory in 2005 came over a 110-car field at East Bay Raceway Park in Gibsonton, Fla. He was a five-time World 100 starter with a best finish of 10th in 2001.

Tommy Joe Pauschert, Carlisle, Ark.: The Arkansas native was a top competitor on pavement in Springfield, Mo., and other tracks before shifting to dirt track racing to become one the region’s top drivers in the late 1970s and early 1980s. Pauschert, now 64, racked up more than 350 career feature victories, most of them driving his famed No. 10-4 car. He captured track championships at tracks in Arkansas, Louisiana and Mississippi and major victories including during the National Dirt Racing Association’s opening season at Crawford County Speedway in Van Buren, Ark. Pauschert finished third in NDRA points in the tour’s final season in 1985. Other major victories for Pauschert included 1977’s Midwest Dirt Track Championship at Thunderbird Speedway in Muskogee, Okla.; 1978’s Southeastern Winter Nationals at Volusia County Speedway in Barberville, Fla.; and 1978’s FINA Missouri State Dirt Track Championship in Bolivar, Mo.

Three contributors to the sport will also be enshrined including: Mike Allgaier, Hoosier Tire Midwest: The man who in 1971 founded D&M Speed Shop in Springfield, Ill., from an apartment with his wife Dorothy evolved the business into Hoosier Tire Midwest in the heart of United Midwestern Promoters country. The business included providing parts at area tracks, evolving into dealer sales and a second location in Indianapolis, Ind. Allgaier's is the father of NASCAR driver Justin Allgaier, the 2008 ARCA Series champion who came up through the Dirt Late Model ranks as a teenager in cars fielding by his father.

Dick Murphy, Volusia County Speedway: The longtime owner of one of the nation's most famous dirt tracks near Daytona Beach, Fla., known as "Dickie" was also a National Dirt Racing Association championship-winning car owner on the National Dirt Racing Association. Murphy owned and operated the Barberville, Fla., oval from 1982-92, then repossessed the facility in 1998 and continued operating it until 2005 (it's now owned by the World Racing Group). As a team owner, Murphy fielded Mike Duvall's famed Flintstone F1yer machine that he drove to the 1982 NDRA title and World 100 victory at Eldora Speedway.

In addition to the induction class Ohio’s Larry Boos who has been one of the long-time leaders of the management team at the world renowned Eldora Speedway and Tennessean Jimmy “Pup” Thomas who spent many years as a representative of Hoosier Racing Tires in the Dirt Late Model market will both receive the Hall of Fame’s Lifetime Achievement Award during the ceremony. Visit the NDLMHoF on the World Wide Web at www.ndlmhof.com and be sure to like our Facebook page to stay on top of all the latest happenings at the newly renovated National Dirt Late Model Hall of Fame.