The Post-Journal
by Scott Kindberg
December 2, 2020

He Was The Best

Mike Mangano walked into the Chautauqua Sports Hall of Fame in downtown Jamestown a couple years ago bearing a gift.

I knew immediately that if that small piece of cardboard, featuring the 1974-75 Topps trading card of Virginia Squires forward George Carter, could talk, it would have quite a story to tell. So I flipped it over, and on the back were the statistics of Carter’s American Basketball Association odyssey that would ultimately span seven seasons.

To suggest the information was impressive would be a massive understatement.

Did you know, for example, that the 1984 Chautauqua Sports Hall of Fame inductee was considered one of the ABA’s best players in the early 1970s?

Did you know that during the 1973-74 season, he led the Squires in scoring, averaging 19.3 points per game? 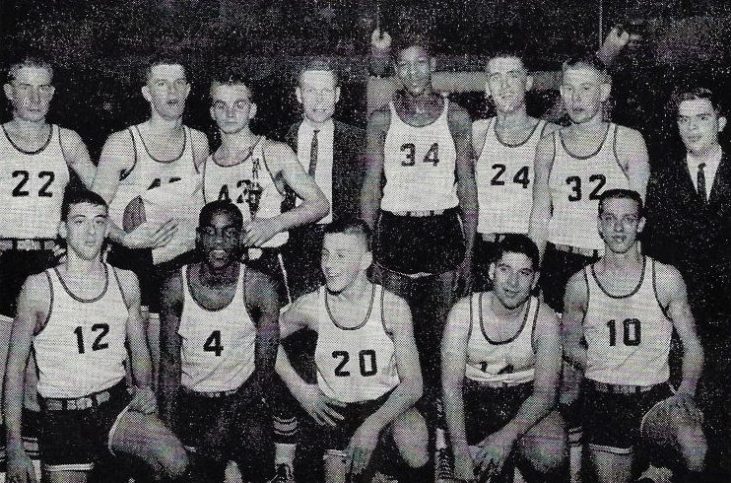 And did you know that he was rarely out of the lineup, a durability that allowed him to play at least 75 games in four straight seasons.

That’s not a bad resume for a guy who graduated from Silver Creek Central School in 1963.

“He was, obviously, head and shoulders better than all of us who played with him or against him,” said Mangano, a classmate of Carter and a Black Knights’ teammate in four sports, earlier this week. ” … Whatever he did, he did better than anybody I was associated with. In small-town Silver Creek back in the 1960s, how many guys were like that?”

Well, I can think of exactly one.

Sadly, Carter passed away last month in Las Vegas after fighting a losing battle with cancer. He was 76.

How big was Carter’s star locally?

At Silver Creek, Carter was a member of two Section VI Class B championship basketball teams (1961 and 1962) and was twice an all-Western New York selection in that sport; was a first team all-WNY choice in football; was an outstanding baseball player; and was the area’s best 100-yard sprinter. That all-around ability resulted in him being drafted by the Detroit Pistons, the Buffalo Bills and the New York Mets.

“He was the best all-around (athlete) I’ve seen in my time,” Mangano said.

Upon graduating from high school, Carter scored 1,322 points and averaged 19.4 points per game in three seasons at St. Bonaventure University. He ranks fifth in rebounds with 849, including a career-high 305 in 1966-67. His 12.4 rebounds-per-game average is second only to Bob Lanier in school history.

Yet, somehow, Carter, who was named to St. Bonaventure’s All-Century Team last year, never big-timed anybody.

Of course, hanging out with Carter did have its share of perks.

Mangano fondly remembers the nights that he and his buddies, including Carter, would make the short road trip to Angola and its many nightspots that were frequent haunts for young people throughout Western New York.

That’s because, Mangano maintains, the figurative equity that Carter had built up in the community was just as impressive as his athletic accomplishments.

“There was never, ‘I’m George Carter. I can do whatever. I’m better than you,'” Mangano said. “I never saw it.”

What Mangano DID see, however, still resonates today, particularly on the hardwood.

“He could do anything,” Mangano said. “His skill level was much greater than the rest of us. He could shoot and, obviously, there weren’t many 6-5 kids in high school. He just dominated at both ends of the court. He was a good defensive player, but he wasn’t a selfish player (either).”

During the summer, Mangano played shortstop and Carter manned the hot corner at third for the Sheridan Pablos in the County-Grape Belt Baseball League.

“At Cherry Creek, he hit a freaking ball down the left-field line,” Mangano recalled. “It was a screaming 100-foot-in-the-air line drive. Just unbelievable. God, did he hit a baseball.”

Carter’s immense talent didn’t get in the way of him having a good time on the diamond during those County-Grape Belt games.

“There were three or four of us from Silver Creek,” Mangano said. “The guy who had the car (who drove the players to the games) thought he was a pitcher, but he was just OK. One game, he threw his first pitch and he smacked somebody right in the middle of the back. Carter and I both looked at each other and just cracked up. We couldn’t look at the pitcher. We turned to the outfield, laughing our (butts) off.”

Mangano admitted that he wished he’d had more opportunities to share those memories with his boyhood friend, but they hadn’t connected in years. Carter did make an attempt in the 1980s when he placed a call to Mangano’s parents, who lived in Silver Creek.

“I never got back to him,” Mangano said. “I should have.”

Had they connected, the retired social studies teacher and former boys basketball coach at Frewsburg Central School knows what they would have talked about.

“I guess we’d reminisce about back in the day and mention the kids we grew up with and the things that happened during the (different sports) seasons,” Mangano said.

And, just in case he needed reminding, Mangano, now 75, could make the short drive from his lakeside home in Stow to the Chautauqua Sports Hall of Fame to check out his friend’s accomplishments that are printed on the back of that Topps trading card from 45 years ago.

“We had the card at my mom’s,” Mangano said. “After she passed away, my brother, Don, who lives in Silver Creek now, had it for some reason. I don’t know how he ended up with it, but he told me, ‘You probably want this more than me.’ I had it for a few years and then I decided it should go to the Chautauqua Sports Hall of Fame.”

Upon closer inspection, the last sentence of Carter’s mini-bio on the back of the card reads:

“Came to Virginia from the Nets.”

Guess who George Carter was traded for?

A guy by the name of Julius Erving.