Heather R. (Lefford) Edborg, 40, of Saco, Maine, was called by God to be an angel on Monday, July 1, 2013, after an 11-month battle with an extremely rare form of sarcoma cancer.

Heather graduated from Falconer Central School in Falconer, N.Y. She received an academic and athletic scholarship to Erie Community College in Buffalo, N.Y., where she received a degree in respiratory therapy. She received a second academic and athletic scholarship to Ashland University in Ashland, Ohio, receiving a bachelor's degree in health education. She earned female athlete of the year at both colleges and still holds multiple records in softball today. She also was invited to try out for the United States Olympic softball team in 1996. 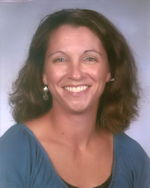 She started coaching softball in Kennebunk. Heather was a wellness teacher at Thornton Academy in Saco for 16 years. She was also assistant coach for field hockey and swimming.

She enjoyed skiing, dancing, scrapbooking and reading. She was a member of the Saco Soccer Club and Saco Bay Lacrosse Club. Most of all, she loved to spend time with her family and watch her children's sporting events.

She was a parishioner of Most Holy Trinity Church in Saco.

She is survived by her husband of 17 years, Scott Edborg; three sons: Noah, Sammy and William; her parents: Gary and Barbara Lefford; two brothers: Troy Lefford and his wife Dorothy, and Jay Lefford; and several nieces, nephews and countless friends.

Visiting hours will be from 4-7 p.m. Friday, July 5, 2013, at Cote Funeral Home, 87 James St., Saco. A funeral mass will be celebrated at 11 a.m. Saturday, July 6, 2013, at Most Holy Trinity Church, Good Shepherd Parish in Saco. Burial will be at a later date. Services will be held in Falconer, N.Y., at a later date. To send condolences to the family, go to www.cotefuneralhome.com.

In lieu of flowers, donations can be made to the "Heather Edborg Fund" c/o Lynn McAlary, 4 Jacqueline Drive, Saco, ME 04072. A trust fund will be established for her children with this money.