Honoring and Preserving the Sports History of Chautauqua County 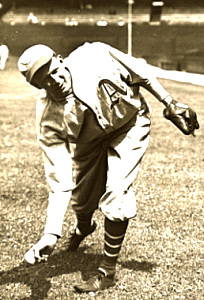 Howard Ehmke had one of the most successful Major League Baseball careers ever among Western New Yorkers. He is best remembered as the 35-year-old right-hander of the Philadelphia Athletics who unexpectedly started Game One of the 1929 World Series against the slugging Chicago Cubs and struck out a then record 13 en route to a surprising triumph in one of Connie Mack’s most famous tactical decisions. But it would be an injustice to reduce Ehmke to just that victory, the last in his career. Over an eight-year stretch, from 1919 to 1926, he was one of the American League’s most durable hurlers, averaging 16 wins, 21 complete games, and 266 innings per season.

Howard Jonathan Ehmke was born in 1894 in Silver Creek, NY, to Charles Ehmke, who emigrated from Germany at the age of 2 in 1857 and owned a sawmill in town, and Julia (Green) Ehmke, a first-generation Swede. They raised 11 children; Bob, as Howard was called as a child, was the ninth child and the fifth of six boys. Howard, a tall and lanky youth, pitched for Silver Creek High School and also hurled for a local town team, the Horseshoes.

Ehmke began his big league career in 1915 at the age of 20 with the Buffalo Blues of the Federal League. He would go on to pitch for 15 seasons with the Detroit Tigers, Boston Red Sox and Philadelphia Athletics. In the wake of the US’s entry into World War I, Ehmke enlisted in the Navy and missed the entire 1918 season.

Throughout his career, Ehmke was described as tall, gangly, emaciated, a beanpole, or a stringbean. He was 6-feet-3 and weighed about 165 pounds (though he gained 25 pounds by the late 1920s). Contemporary reports often mentioned his “slender [right] wrist, long hand, and flexible fingers” which could easily hold, even conceal a baseball.“ Ehmke had an angular wind up that suggested a professional contortionist,” wrote F.C. Lane in Baseball Magazine. “His thin arms and legs sprawled all over the landscape, or so it seemed to the harassed batter. Ehmke had a trick of delivering the ball so that it came at the batter against this backdrop of undulating arms and legs.” Ehmke has a “wind-up like a bologna bender,” read one especially poetic description. According to sportswriter Sam Murphy, Ehmke was a master of the “cross fire delivery.” Ehmke stepped as far as possible to third base and threw across his body. In his submarine delivery, Ehmke reared back and then hurtled forward with his right arm whipping downward, his hand almost touching the ground, before he followed through with his arm across his chest. The cumulative effect of Ehmke’s various deliveries, changing speeds, and the movement of his arms was unsettling to the batter and diverted his attention.

Ehmke was a 20 game winner for the last place Red Sox in 1923, a season that also included a no-hitter. Four days later he followed that gem with a one hit performance, giving him the American League record for fewest hits allowed in consecutive games. He was among the league leaders in complete games, strikeouts, and innings pitched. He followed up in 1924 with a 19 win season in which he was second in strikeouts and led the league in innings pitched. He was traded to the Philadelphia A’s in 1926. 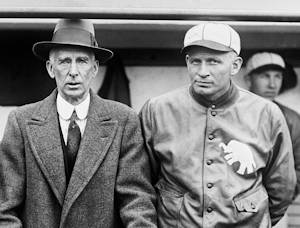 In the wake of a knee injury that prematurely ended his 1928 season, many wondered if the 34-year-old who logged just 139 innings would return to the A’s in 1929. But Connie Mack (photo at left with Ehmke) had a soft spot for the teetotaling hurler who was described as a “fellow of gentle soul, soft spoken, diffident, and shy. In his personal habit he is as fastidious as a girl. He has never tasted liquor or tobacco.” While the A’s cruised to the pennant with a 104-46 record, Ehmke was relegated to a spot starter, logging just 54 innings.

Mack’s decision to start seven-game-winner Ehmke instead of southpaws Lefty Grove (20-6) and Rube Walberg (18-11) or righty George Earnshaw (24-8) in Game One of the World Series against the Chicago Cubs shocked the baseball world, but it was a calculated move by the Tall Tactician. According to Ehmke, the plan was hatched in early September when the two discussed the right-handed-heavy and free-swinging Chicago lineup. Prior to making his final start of the season, a victory over the White Sox on September 13, Ehmke had scouted the Cubs, who were playing the Phillies several blocks away from Shibe Park in the Baker Bowl.

On October 8, in front of more than 50,000 spectators, Ehmke hurled a complete-game eight-hitter to defeat the Cubs, 3-1 in one of the most storied games in the history of the fall classic. He set a Series record with 13 strikeouts, including Hall of Famers Rogers Hornsby, Hack Wilson, and Kiki Cuyler twice each, and walked just one.

Upon his retirement a year later, Ehmke sold another idea to his former manager, Mack – a large canvas tarpaulin that could be spread over the infield when it rained to keep water off the baseball diamond. That was the beginning of the Ehmke Manufacturing Company, which is still in business today.

Howard Ehmke passed away in Philadelphia in 1959 at the age of 64. He was inducted into the Chautauqua Sports Hall of Fame in 1983.