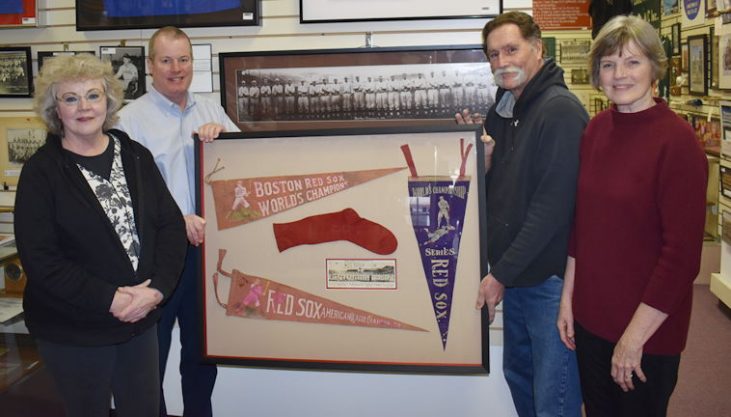 The grandchildren of Hugh Bedient paid a visit to the Chautauqua Sports Hall of Fame in Jamestown on Thursday where they donated memorabilia belonging to the former Major League pitcher and 1912 World Series hero. Bedient, a Falconer native, appeared in the second, third, fifth and eighth games of the 1912 Classic between his Boston Red Sox and the New York Giants. In the fifth game, Bedient hurled a three-hitter to beat Christy Mathewson, and started, but did not win, the eighth game when Boston claimed the title. Lifted for a pinch-hitter with the score tied, 1-1, Bedient was on the bench when Smoky Joe Wood won the contest. Bedient also had the distinction of appearing in one of the three tie games ever played in the World Series — the 11-inning, 6-6 second game, which was called because of darkness. In that 1912 campaign — Bedient’s rookie year — he posted a 20-9 record and a 2.92 earned-run average. He was inducted into the Chautauqua Sports Hall of Fame in 1983. In the photo above are Bedient’s grandchildren, who presented the CSHOF with the framed memorabilia, including one of Bedient’s uniform socks; a couple of pennants commemorating the 1912 World Series championship; and a 1912 Red Sox team photo. From the left are Candy Ames, Tom Ames, Hugh Imus and Pam Ames.