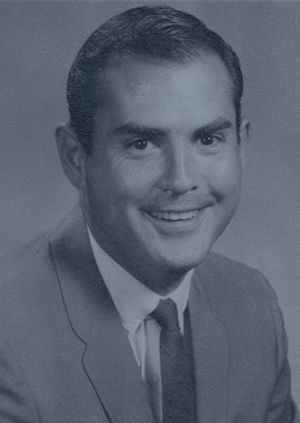 EDITOR'S NOTE: The following article by Scott Kindberg originally appeared in The Post-Journal on March 12, 2013.

When Ed Trisket, then a freshman, showed up for football practice at Panama Central School more than half a century ago, he was greeted by a new head coach, a 22-year-old by the name of John "Jack" Keeney.

Fresh out of Cortland College, Keeney wasn't much older than some of his players, which often made practice sessions quite interesting.

"The (coaches) were just big kids in '62,'" Trisket recalled in a phone conversation Monday night, "so they actually all decided they would scrimmage against us."

So Keeney and company pulled on the pads, snapped on the chin straps to their helmets and went toe to toe with the teenagers.

"We thought we'd get some licks against them," Trisket said, "but we were the ones who got licked."

What Trisket couldn't have known then, but certainly appreciates now is that the impact that Keeney left on him and countless others on the field behind the school 51 years ago actually has served as a metaphor for how to live one's life.

"He was almost like a father," the Niobe resident said.

On Thursday, the "father" of Panama football will be laid to rest, just weeks after being diagnosed with terminal cancer.
- - -

Deb Palmer first became acquainted with Keeney in 1977 in her first year as a teacher at Panama. "It goes without saying that our friendship was special," Palmer said. "To know the phone will never ring again for me to hear, 'Palmer, Keeney' pains me."

But what Palmer will be able to hold onto forever are the memories of a relationship that grew from Keeney as mentor and co-worker to Keeney as an abiding friend.

"We certainly solved a lot of problems over coffee over the years ... or at least we thought we did," Palmer said. "Our passion for Panama and the Yankees was our common thread."

And that friendship also included their respective spouses, Bill and Mary. Together, the couples took trips to New York City, Toronto, Cleveland, Buffalo and Philadelphia, almost always to see some kind of sporting event, most often involving the guys in pinstripes.

"Those were really great times with great memories," Palmer said.
- - -

Loren Smith was smitten by Keeney almost immediately upon meeting him nearly 30 years ago. Smith, now a teacher at Panama and a former assistant football coach, described his friend and mentor as an "innovator, a motivator and a captivator."

"At the end of the day (he taught me) that how you treat people and the relationship you have with other people is going to be your legacy,"

Smith said. "He treated people really, really well, whether they were athletes or bookworms in the classroom. He could find a way to get the most out of people around him."

Less than two weeks ago, Smith visited Keeney at the latter's West Ellicott home. During their conversation, Smith said the beloved coach didn't speak about his won-loss record, but rather about the relationships that his former players have forged and that endure to this day.

"He thought that they had bettered his life," Smith said, "but if you ask any (of his former players) they can't pinpoint one single thing that they did to make his life better. They'd say it was the other way around."

Chris Payne, the current Panama football coach, accompanied Smith on that visit. A Depew native, Payne arrived at Panama in 1995, wondering if he was "going to make it here."

"I thank him for bringing me down here and believing in me," Payne said. "He's touched many lives and I'm just one small part of it."
- - -

Tim Card, Panama Class of '85, played for Keeney during a time when the Panthers made two appearances at the home of the Buffalo Bills, which was then known as Rich Stadium.

"He was an awesome coach and somebody I respected," said Card, now the highway superintendent in the Town of Harmony. "Sometimes you didn't always agree with him, but you knew he was right."

Take, for instance, the time in the mid-1990s when one of Smith's jayvee players had been ejected from a game for kicking a football in disgust after being flagged for repeated penalties.

"I went to Jack for advice," Smith recalled, "and he said, 'Maybe what you should do - because he didn't learn it the first time - is make him run 10 100-yard sprints, but make him kick the football down the field at the same time.'"

So every day for a week, the young man spent his post-practice time learning a lesson the hard way.

"Jack always had an edge about him that the average guy didn't," Smith said.
- - -

The first high school football game I ever covered was in 1984 at Panama. The Panthers were taking on rival Clymer. I don't remember how the game turned out, but I do remember the coaches - Keeney and Howard McMullin, the longtime Pirates' head man.

"I always looked at it as a real pleasure to coach against Jack," McMullin said, "because his teams were always well prepared and they always played with class. Jack was the same way. I really enjoyed it. Those were some fun times for us. ... We were right down the road from each other, which made it nice."

Dick Gallagher, the editor and publisher of Western New York High School Sports, remembered Keeney as a man who had a "passion for (football), a passion for the kids and was one of the most respected coaches and gentlemen I've ever encountered. He was always smiling."
- - -

Because of their shared passion for the Yankees, Palmer and Keeney would often exchange any book published about the franchise.

I think it's fitting that the two longtime friends would share a book on Lawrence Peter Berra just days before Keeney's passing.

Known for his quotes, Berra once said, "You can observe a lot just by watching."

Wouldn't the world be a better place if we all took inventory of the things that we've watched Keeney do through the years and put them into practice in our own lives?

As Gallagher noted: "We need more Jack Keeneys on this earth."
- - -

A physical education teacher at Panama Central School for 34 years (1962-1996), Keeney was the Panthers' football coach for 33 years and athletic director for 30. In his time calling the shots from the sideline, he posted a 154-106-10 record, won four division titles and had four unbeaten seasons.

A former Section VI football chairman, Keeney also coached track and field, basketball, baseball, volleyball and swimming during his tenure at Panama. To honor his service, the athletic complex at the school was named the Jack Keeney Community Field in 1998. 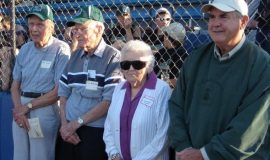 Jack Keeney (far right) with Bob Olson, Jim Mathews and Arlene James in 2009 at Diethrick Park celebrating the 70th anniversary of professional baseball in Jamestown. Jack was the mayor of Celoron where the Jamestown Pirates made their PONY League debut in 1939 playing at Celoron Park. 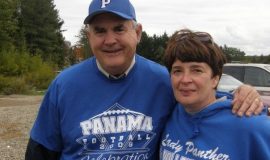