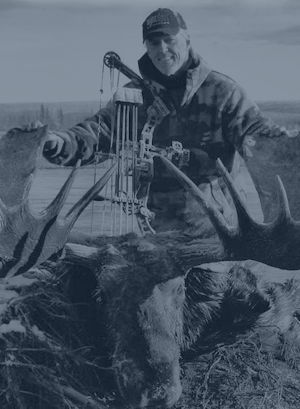 EDITOR'S NOTE: The following article by Jay Young originally appeared in The Post-Journal on January 18, 2015.

Hunters and outdoorsmen have been saddled with more than their fair share of stereotypes and misconceptions in recent times.

In particular, hunters who pursue big-game animals like elk, bear, moose or sheep have found themselves in the crosshairs of animal rights activists and other critics.

If you spend any amount of time on the Internet, you may occasionally run across pictures of hunters with their game animals that are inundated with defamatory comments and nasty criticisms.

But what is the truth behind the men and women who spend so much of their time pursuing these animals?

What do you get when you strip away the political ideology and the emotional dialogue that charges debates over hunting and conservation?

If you take the time to dig a little deeper, you typically find yourself talking to a person like local resident and accomplished bowhunter Jake Ensign and the conversation is one that is sure to surprise those uninitiated in the outdoors.

Growing up in Westfield, Ensign, who now lives in Jamestown, developed an early passion for being in the woods and looking for game animals, but it wasn’t until he left the United States Navy and went to college that hunting really came into the picture.

“I never really truly bowhunted until I got out of the military,’’ Ensign said as recalled his hunting background.

“I wanted to improve my woodsmanship, I wanted to be better in the woods. And what I found was that by being a better woodsman I became a better conservationist.’’

Throughout college and then a local career in the pharmacy business, Ensign continued to pursue hunting and hone his skills with a bow.

“For the first 20 years I hunted, I only ever hunted four species. I just kept hunting them over and over again,’’ he said.

That all changed between 2006 and 208 when Ensign had the opportunity to retire, and was also the benefactor of some luck - which usually doesn’t do much good when it comes to hunting big game.

It was in 2008 when a number of exciting hunts that Ensign had booked years in advance came up earlier than expected, which was fine by him. He wanted to take advantage of the chance to go after new animals in different areas, after all.

During that year Ensign took a big step down the path towards achieving what outdoorsmen call the North American “Super Slam.’’

Also called the “Holy Grail’’ of bowhunting, a Super Slam is achieved once a hunter has bagged all 29 species of recognized big-game animals that are native to North America.

It is an accomplishment that less than 20 hunters in the world have completed with a bow, and one that Ensign added to his incredible hunting resume in September of 2011 after taking home a Barrent Ground Caribou from the Northern Yukon.

What about the other 28 animals you might ask? Those include four species of native bears, five type of deer, four other types of caribou, three varieties of elk, three different moose, five types of sheep, one goat, one bison, one antelope, one muskox and a cougar.

Each and every one of those animals has been taken down by Ensign with a bow, and taxidermied to one extent or another for preservation.

For those who do not have a background in hunting, it may be a real struggle to understand why a person would want to pursue one big-game animal, let alone 20 across an entire continent.

To a lot of people an accomplishment like the Super Slam is tied at the hip to animal cruelty and wildlife destruction - but the truth is really the opposite.

Ensign, and the majority of responsible hunters like him represent the antithesis of their negative and uninformed stereotypes. It sounds strange until you sit down and think about it, but big-game hunters are really doing more for the conservation of wildlife than any animal rights group could ever dream of.

For a lot of people who have been caught up in propaganda, that is like hearing that the Japanese whaling fleet is actually doing the work of Greenpeace, but it is the truth.

In his quest to take home all of the North American 29 with a bow, Ensign has had the unique opportunity to study the environments and habitats of countless animals. Through going on all of these outdoor adventures, he has had a chance to meet and work with the people who really have the conservation of America’s greatest animals at heart.

It’s not the people who are on the board of PETA who are making sure that elk populations are stable and that big-horn sheep habitats remain unchanged. Most of the money that is actually used on conservation in North America is provided by hunters, and implemented through organizations like the Rock Mountain Elk Foundation, the Wild Turkey Federation and the Wild Sheep Foundation.

“I would say that conservation has been in my mind from the first day I really got involved with it,’’ Ensign said of his big-game hunting career. “There wasn’t really a light-switch moment. It’s just I am surrounded by some very responsible hunters who have passed (the knowledge) on.’’

When your average non-hunter sees a picture on the Internet of an animal that has been taken down by an outdoorsman, there is usually disconnect between what they see and the reality of what the situation is.

Ensign’s journey into the hunting history books has also been a quest to the help conserve big-game animals and to help break down misconceptions about hunters.

Most people have no problem visiting a supermarket to pick up a roast for dinner, but many of the same people recoil in horror at the idea of taking a deer for food.

That sort of cognitive dissonance is something that hunters can help break through.

“There’s a lot of misrepresentation out there. There (are) a lot of comments being made that are not factual and it’s starting to wear negatively on the hunting community because it’s affecting us directly,’’ Ensign said.

Hypocrisy of critics is an issue that many hunters struggle with, and it is something that Ensign has a good understanding of, thanks to his prowess with a bow.

Most recently Ensign was slated to travel to Mozambique to bow hunt for elephant, but was forced to call off the trip due to a recently enforced ban on hunting. Despite what most newspapers would have you believe, the hunting ban actually poses a far greater danger to elephant populations than hunting from outsiders ever could.

“It’s political,’’ Ensign said. “The generals that run most of the armies for a lot those third-world nations over there make much more money on black-market ivory than they do on the convervation efforts of the hunters that really do want to keep everything in balance. It has nothing to do with hunters doing something that’s mean or cruel. We have things of that sort happening in our country and it’s not necessarily from graft or corruption, it’s people being misinformed.”

In the end, Ensign is not really concerned with getting another head to mount on his wall as many would assume. He pursues big-game because he thoroughly enjoys it, he wants people to understand more about wildlife and where their food comes from. 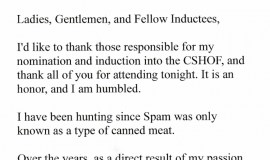 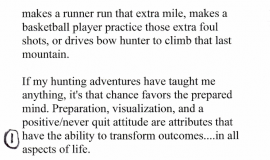 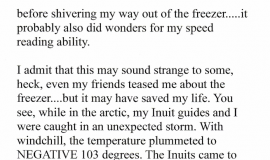 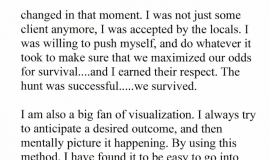 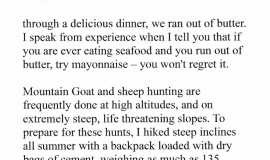 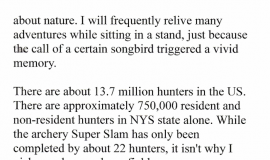 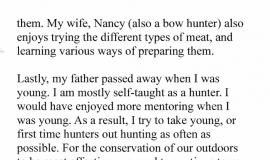 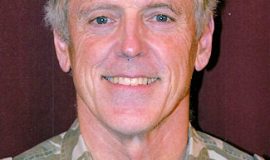