The Post-Journal
by Randy Anderson
November 20, 2019 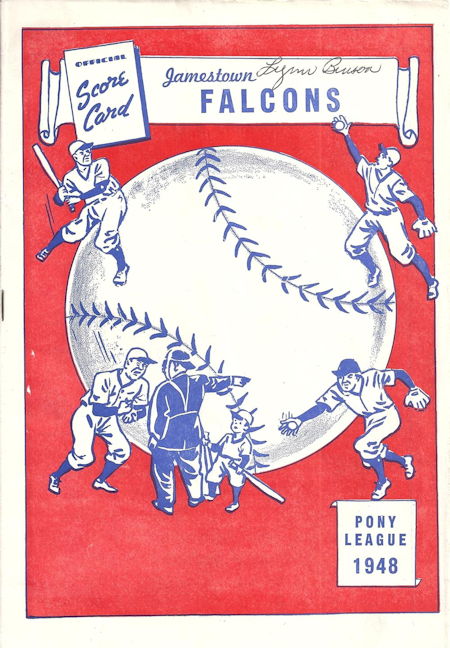 The 2-year run of the Jamestown Falcons as PONY League regular season champions ended in 1948 as they were edged out by Lockport. But the “Falks” did have the league’s batting champ, Pat Haggerty, with a .369 average. National Football League fans will recognize the name Pat Haggerty. He was a top referee in the NFL for 28 years including officiating 3 Super Bowls.

The ace of the Jamestown pitching staff was Jerry Kleinsmith. Posting a 16-7 record with a 2.62 ERA, Kleinsmith had a rare oddity in ’48. He led the PONY League in both strikeouts (258) and bases-on-balls (163). He broke the loop mark with 19 strikeouts in a game, then reset it a few weeks later when he whiffed 20.

After the season, owner John Jachym dropped a bombshell on the local fans when he sold the team to the Detroit Tigers for $50,000, earning a $28,000 profit for his three years of ownership. A year later, 1949, Jachym headed a syndicate of businessmen that purchased a 40% minority interest in the major league Washington Senators for $500,000.

Clark Griffith, the 81-year-old majority owner of the Senators, resented the purchase and never welcomed the 31-year-old Jachym as a partner. After just six months, Jachym sold his shares and moved out of baseball entirely. He later became a multimillionaire in a variety of business ventures and was an influential businessman and confidante to presidents and celebrities until his death in 2005.