The Post-Journal
by Randy Anderson
January 3, 2020 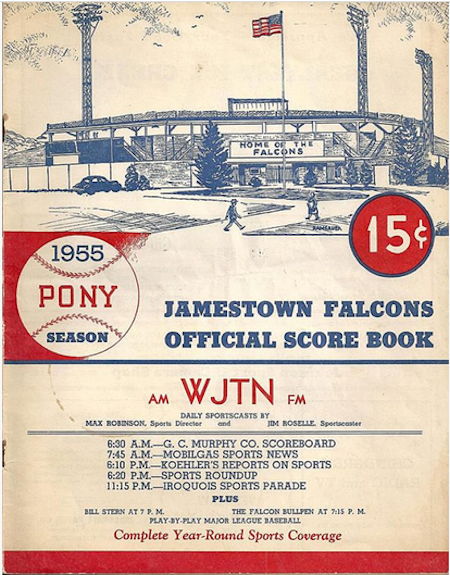 Former WJOC radio announcer, Jerry Lawson, replaced the highly successful Hillman Lyons as general manager of the 1955 Jamestown Falcons. And popular Tony Lupien, the winning manager of the 1951 and 1952 clubs returned for another stint in the Pearl City. But the magic was gone. Lupien’s flock struggled to a 48-78 record, seventh best in the eight-team PONY League. Worse yet, only 37,000 fans spun the turnstiles at Municipal Stadium (in photo below) to see the weak team play. That was a decrease of nearly 50,000 from the previous year.

At the end of the season, the Detroit Tigers put the club up for sale. Jerry Lawson and a partner, Bob Lundell, owner of the Ten Pin Bowling Lanes, bought the team for what was reportedly a “fire-sale” price and then immediately negotiated a contract for Detroit to supply players for 1956.

A 20-year-old pitcher from Little Rock, Arkansas made the final stop of his three-year minor league career in Jamestown in 1955. A high school teammate of Baseball Hall of Famer Brooks Robinson, John Venable took a liking to the city. He eventually made Jamestown his home and became a well-known area concrete contractor.