The Post-Journal
by Randy Anderson
January 14, 2020 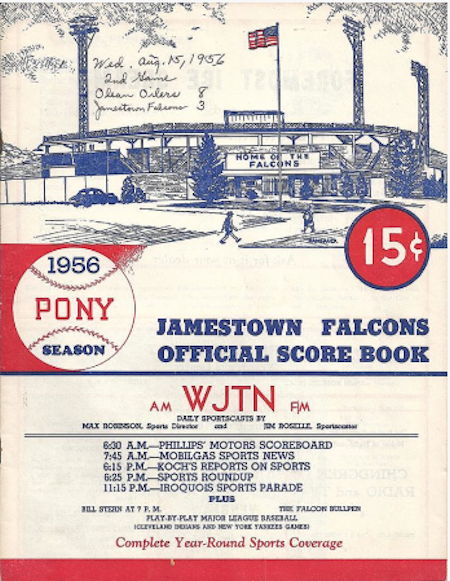 If that weren’t problems enough, a group called Preserve Our Nations’ Youth, notified League President Vince McNamara that they had the legal right to the acronym PONY and planned to sue for infringement. The PONY League had never copyrighted the name. To avoid a lawsuit, the league members rebranded themselves as the New York-Penn (NY-P) League.

The Falcons also had their problems on the field and at the gate. The Flock limped to a 52-62 record, a fifth-place finish, and just 22,000 fans witnessed the squad at Municipal Stadium. Lawson and Lundell even offered free attendance at the final home game. “I’ve lost everything,” Lawson said as he signed over the concession equipment and team bus to the City of Jamestown to satisfy the terms of his lease for use of the ball park. The elephant in the room for Jamestown and the rest of the NY-P League was television.

A bright spot for the three different managers of the 1956 squad, Pat Mullin, Don Lund and Wayne Blackburn, was the performance of the first black players in team history: Jesse Queen, Dick Jones, Wendell Antoine and Bubba Morton. Morton made it to the “bigs.” Other players of note were pitcher Phil Regan who enjoyed a 13-year MLB career and catcher Robert “Buck” Rodgers who managed more than 1,500 games in the major leagues for the Brewers, Expos and Angels.