The Post-Journal
by Randy Anderson
January 27, 2020 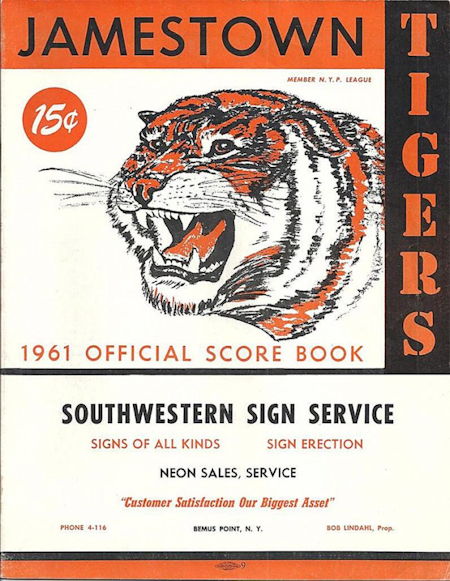 Each offseason after the folding of the Jamestown Falcons in the middle of the 1957 season, Ernest C. Kessler contacted major-league ballclubs in an effort to return professional baseball to the stadium he helped to build in 1941. He was unsuccessful in 1958, 1959 and 1960.

Kessler finally got a break when Hillman Lyons, general manager of the highly successful 1954 Falcons, returned to Jamestown as the new manager of the Hotel Jamestown on Third Street. Lyons said, “I feel that having a baseball club in this city is as essential as the hotel.” Together, Kessler and Lyons called their friends within the Detroit Tigers organization and worked out an arrangement. The team would be owned by Kessler and a group of local Jamestowners, but Detroit would handle the on-field operations. This model, whereby local interests, Furniture City Baseball, Inc., would take care of the front office while the major league club took care of baseball operations, would continue for the next 13 years.

In 1961, the Jamestown Tigers took the field under the leadership of manager Al Federoff, a former Jamestown Falcon in 1945 and 1947. After a successful opening day, Post-Journal sports editor Frank Hyde wrote: “The home team won, the umpires were knaves, and the bleacherites yelled … and Jamestown was better off than Brooklyn – we had a pro team to love, cherish, honor and hooray until too many losses do us part.”

Despite finishing in sixth place in the eight-team NY-P League with a 58-68 record, more than 65,000 Jamestown fans supported their team to lead the league in attendance. Among the heroes were future major leaguers Jim Rooker and Pat Jarvis.