The Post-Journal
by Randy Anderson
February 3, 2020 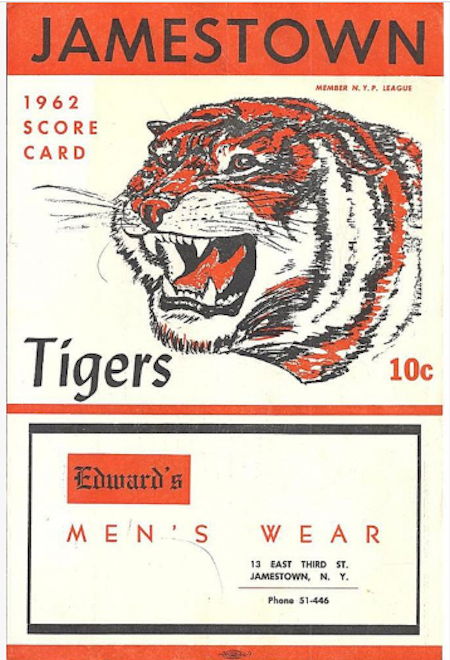 For 1962, the husband and wife team of Nick and Norma Ciccarello returned as general manager and office manager respectively of the Jamestown Tigers, but a new face was in the dugout.

Former Major League pitcher Frank “Stubby” Overmire was pegged by Detroit to lead the Class D entry in the New York-Pennsylvania League. Overmire guided the Tigers to the pennant in the six-team league, but was eliminated from the playoffs by the Governor’s Cup champion Auburn Mets.

Jamestown again paced the league in attendance with more than 68,000 fans visiting the park, an increase of 3,000 from 1961. Although the stadium was still officially titled Municipal Stadium, it became better known as College Stadium in deference to its location adjacent to newly constructed Jamestown Community College.

Arguably the most popular Tiger was the speedy, left-handed centerfielder from Oregon, returning for another season in Jamestown. Jim Rooker played 119 games in the outfield, but also pitched 10 innings. That was a harbinger of things to come as Rooker was eventually converted to a full-time pitcher. He made it to the big leagues with Detroit, Kansas City and Pittsburgh, winning a World Series title with the Pirates in ’79. He later became a broadcaster for the Pirates and ESPN. Other future big-league players on the 1962 squad were Ike Brown, Don Bryant and Randy Cardinal.