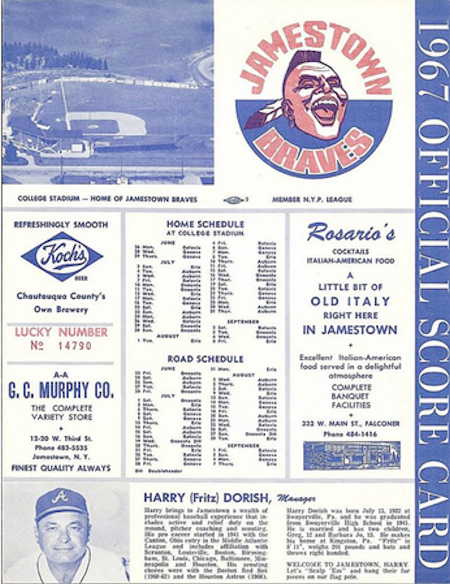 Following the departure of the Los Angeles Dodgers after just one year in Jamestown, Russ Diethrick was able to secure a working agreement with the Atlanta Braves for 1967. The Braves came to town largely because of John McHale, the president of the Atlanta organization. McHale had been the farm director of the Detroit Tigers when they had a team in Jamestown in 1954, so he was familiar with the city and the New York-Penn League. Now as the leader of the Braves, he suggested to Jim Fanning, his director of minor league operations, that he field a team in Jamestown.

The relationship between Fanning and Diethrick would last for decades. Ironically, Fanning’s son, Frank, is the general manager of the Jamestown Tarp Skunks team that will play at Diethrick Park this summer.

The NY-P League was also making changes in 1967. Instead of playing 120 games a season, the NY-P would become a “short-season” league with 72 games. The Jamestown Braves were managed by ex-MLB pitcher Harry “Fritz” Dorish. The Braves completed the season in fourth place with a 39-41 record. Not a single player from the 1967 Jamestown squad ever advanced to the “bigs.” Despite the support of McHale and Fanning, Atlanta ownership decided to transfer their Class A team to Anderson, South Carolina to be closer to their Georgia base of operations. Jamestown was again left searching for a team.