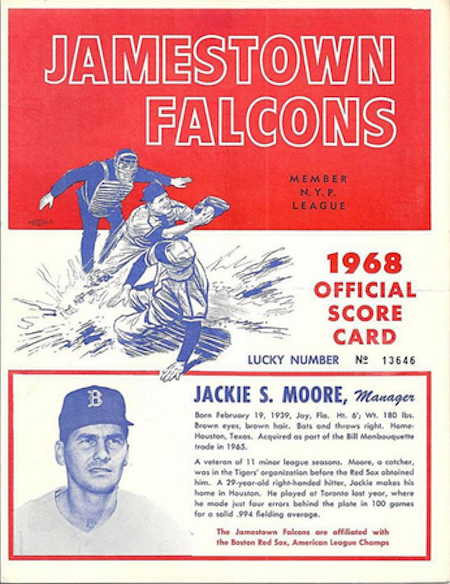 As a result of the departure of the Atlanta Braves after the 1967 season, Jamestown Furniture City Baseball was again looking for a partner. Initially the Houston Astros expressed interest, but eventually the Boston Red Sox signed a working agreement. The Red Sox became the third team in three years to come to College Stadium.

The team name that was chosen came from past glory years — Falcons. Boston sent ex-Detroit Tiger catcher Jackie Moore to manage the squad. Moore went on to have a 40-year career as a coach and manager in the big leagues, earning a World Series ring with the Cincinnati Reds in 1970, but did not have success in Jamestown. Boston management took “player development” to a whole new level. They assigned more than 40 players to the Jamestown Falcons to see who would “stick.” Since Moore could only fill out a lineup card with 25 names, team practices became critically important as players fought daily for a roster position.

That method did not equate to winning record. The Falcons finished at 31-44, seventh place in the eight-team New York-Penn League. There were two notable players from the 1968 Falcons. Cecil Cooper was an 18-year-old from Texas who ended up having a 17-year MLB career with the Red Sox and Brewers. He was a five-time all-star with a lifetime .298 batting average. Cooper was the manager of the 2007-09 Houston Astros. Ben Oglivie was a 19-year-old outfielder from Colon, Panama when he arrived in Jamestown. He eventually had 16-year MLB career with the Red Sox, Tigers and Brewers. A three-time all-star, he led the American League in home runs in 1980.

In the accompanying team photo, the bottom row shows Jackie Moore on the far left, Cecil Cooper is seventh and Ben Oglivie is ninth.