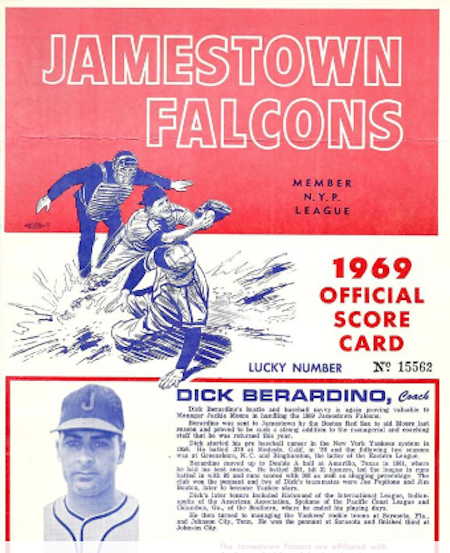 The Boston Red Sox returned to Jamestown in 1969 as did Manager Jackie Moore. They also continued to use their player development strategy of bringing in large numbers of players to see which ones will become the cream that rises to the top. Over 45 Red Sox prospects called Jamestown home in ’69 and battled to be a part of Manager Moore’s 25-man lineup each night.

Similar to the previous year, the Falcons failed to deliver on the field, compiling a 33-41 record, for sixth place in the eight-team New York-Penn League. Jamestown fans failed to deliver as well. Just 13,000 tickets were sold, the fewest in franchise history, and less than 10% of the 143,000 patrons in 1942. To be fair, overall NY-P League attendance was suffering as well. Total league attendance was 190,000, down from a league high of 602,000 in 1949.

One 1969 Falcon who proved to be the cream of the crop, was a 17-year-old outfielder from Santa Monica, California. Dwight “Dewey” Evans enjoyed a very long and productive 20-year MLB career. Evans was a three-time All-Star and eight-time Gold Glove fielder. He played more games in Boston Red Sox history than anyone other than Carl “Yaz” Yastrzemski. In an interesting bit of fate with a Jamestown twist, Evans had a daughter who married the son of Dick Beradino, his coach on the ’69 Falcons.

An experimental rule change was initiated in the NY-P League in 1969. MLB asked league President Vince McNamara to try out the “declared pinch-hitter.” Four years later the American League adopted the “designated hitter” that remains in place today.