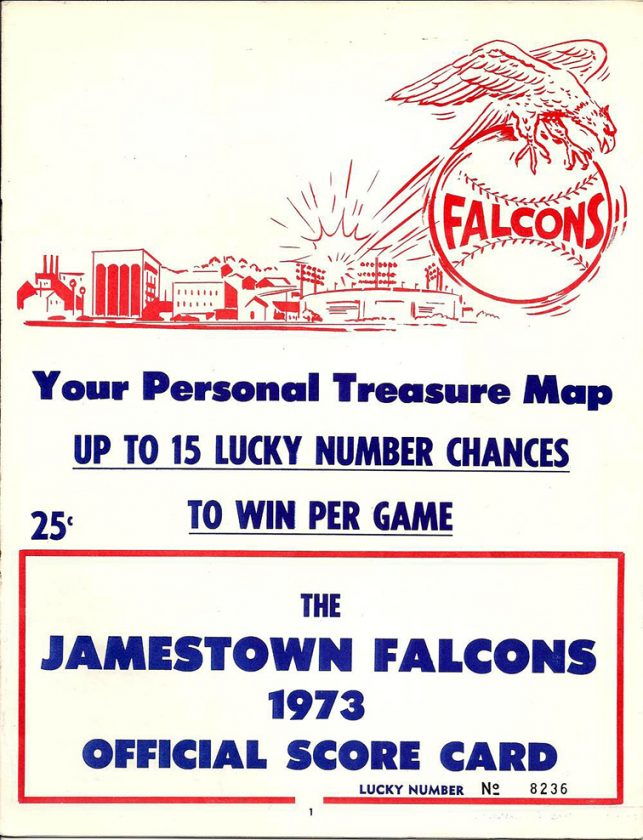 For the 1973 season, Montreal Expos General Manager Jim Fanning against sent his No. 1 draft choice, Gary Roenicke, to play for Walt Hriniak in Jamestown. Roenicke took Hriniak’s hitting instruction to heart, pounding out a .298 batting average, which earned him a spot on the New York-Penn League All-Star team as a third baseman. Roenicke would go on to have a 12-year Major League Baseball career with the Expos, Orioles, Yankees and Braves. He earned a World Series ring with Baltimore in 1983.

Joining Roenicke on the NY-P League All-Star team was the shortstop from Newark, who went on to have a 20-year MLB career with the Milwaukee Brewers, Robin Young. He was elected to the Baseball Hall of Fame in 1999.

The Falcons stayed in the hunt for the league title until August. A 41-28 final record was good enough for third place behind Oneonta and Auburn.

Although a competitive ball club was fielded by Montreal and Hriniak for the second consecutive year, only a modest increase in attendance was seen by Russ Diethrick, Eric Goguen and Jamestown Furniture City Baseball. Jacques Burrelle, Falcons general manager, wrote the following in his end-of-season report to his bosses in Montreal: “With Jamestown never more than five games off the pace, with excellent newspaper and radio coverage, with fair support from the advertising community and more than a dozen lucky number prizes given away at each game, attendance averaged about 550 per game. Competing with televised baseball, strong Little League and Babe Ruth operations, and many outdoor opportunities in this recreational area, the appeal of Minor League Baseball appears significantly impaired. Serious concerns arise whether baseball in Jamestown is on a direct route toward community disinterest.”

On Oct. 27, 1973, Fanning sent a telegram to Vince McNamara, NY-P League president, and Jamestown Furniture City Baseball notifying the parties that the Expos were cancelling their player development contract. The lights were turned out at College Stadium. Would baseball ever come back?