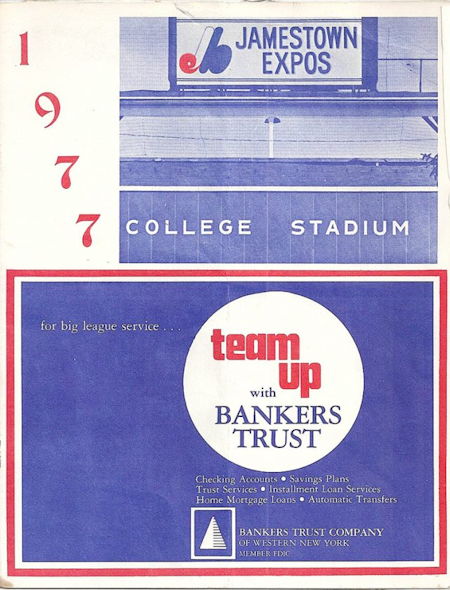 Following the decision by the Montreal Expos to cancel their player development agreement with Jamestown at the end of the 1973 season, the city was without a team in the New York-Penn League in 1974, 1975 and 1976. Also dropping out after the 1973 season was Geneva. League president Vince McNamara kept the struggling six-team loop going until fortunes changed in 1977.

Jamestown and Geneva came back that year along with new teams in Little Falls and Utica. The 10 teams were split into Western and Eastern Divisions of five teams each. Jamestown was able to rejoin the league in 1977 when Russ Diethrick arranged a telephone call between Jim Fanning of the Montreal Expos and Clefton Farnham, an insurance agent from South Dayton.

Farnham, who as a boy in Florida had caddied for Babe Ruth, Lou Gehrig and Bill Dickey, was a former player for Olean in 1941. Farnham convinced Fanning that a minor league club could be kept afloat in Jamestown. The Expos took control of the franchise for free and Farnham was named general manager. Diethrick, who had recently been named the director of Parks and Recreation in Jamestown, negotiated a rental agreement for use of College Stadium.

The reborn Jamestown Expos were led by a familiar face. Pat Daugherty had been a coach under Walt Hriniak in 1972 and was also a highly successful college coach at Indian Hill Community College in Centerville, Iowa. Daugherty became one of the most popular figures in the history of Jamestown baseball. His contagious enthusiasm, scrappy style of play and tirades against umpires endeared him to local fans. He managed the Expos for six years (1977-1981 and 1990) before ultimately becoming a key figure in the expansion Colorado Rockies organization. Daugherty’s squad posted a 35-32 record and attendance improved to 18,000. Things were looking up on Falconer Street.