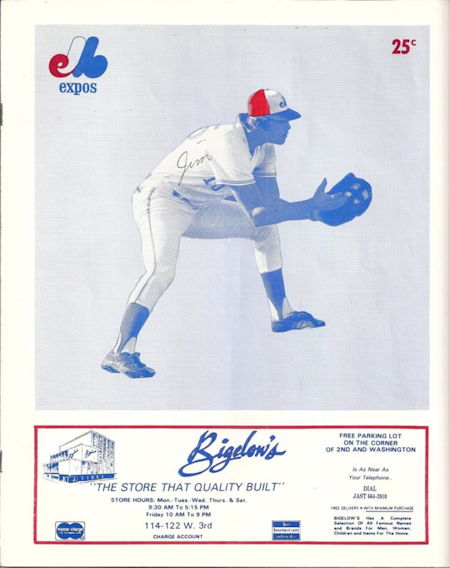 Following the initial success of the reborn Jamestown Expos in 1977, hopes were high for 1978. Popular manager Pat Daugherty was back with a strong roster, led by Anthony Raymond “Razor” Shines, a powerful first baseman from Durham, North Carolina. Shines epitomized the spirit that Daugherty tried to instill in his players.

“Razor Shines, at 6-foot, 1-inch, 210 pounds, has to be the largest and most persuasive cheerleader in the area,” noted Frank Hyde of The Post-Journal. A .295 hitter in Jamestown, Shines made it to the big leagues with Montreal and was later a coach with the Chicago White Sox and New York Mets.

Another member of Daugherty’s ’78 team was infielder Tony Phillips from Atlanta, Georgia, who had a successful 18-year career in Major League baseball with seven teams. He led the American League in runs (114) in 1992 and walks (132) in 1993. Phillips won a World Series ring with the Oakland A’s in 1989.

Frank Wren, a man who would play a key role in Jamestown baseball in later years, was named as the team’s most valuable field player with his .313 batting average and was the center fielder on the NY-P all-star team. The Jamestown Expos recorded a 44-28 mark to finish second in the Western Division of the NY-P League behind Geneva, the league playoff champion.

More importantly to the team’s front office staff of Clef Farnham and Pat Morrell was the bottom line that showed a huge attendance increase from 18,000 fans in ’77 to 32,000 rooters in ’78.

A very unusual incident happened during an August game at College Stadium. Oneonta relief pitcher Henry Herrera was felled when a moth flew into his right ear. Expos trainer Audi Thor rushed to the stricken player and used a pair of tweezers to remove the offending insect. The moth flew away seemingly unharmed, while Herrera was escorted to the locker room.