Fredonia Native Leads U.S. Track, Field Trials
EUGENE, Ore. (AP) - Jenn Suhr cleared 15 feet, 1 inch to win the women's pole vault in the U.S. Track and Field Trials for a return trip to the Olympics.Becky Holliday finished second Sunday after clearing 14-11, and Lacy Janson earned a spot on the U.S. team with a third-place finish at 14-9. All three women met the Olympic standard needed to compete in London. 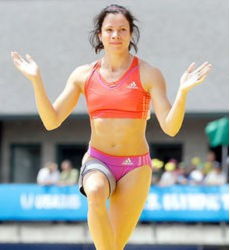 Suhr,a Fredonia native, holds the American record in the pole vault, but last year she struggled with fatigue and was diagnosed with Celiac disease.

Suhr was inducted into the Chautauqua Sports Hall of Fame in 2009.