The Post-Journal
by Scott Kindberg
September 2, 2013

About a month ago, Jim McElrath Sr., made his long-awaited summer trip to Jamestown High School and the newly renovated gymnasium that bears his name. The visit wasn't really a surprise to him. Fact is, he'd been anxiously awaiting a tour once architect Paul Hedin of Clark Patterson Lee gave the green light.

But nothing, absolutely nothing, could have prepared the former JHS principal (1976-1994) for the greeting he received once he finally got there. It wasn't just a grand re-opening of the 27-year-old facility. To Jim Sr., it was the grandest of re-openings.

With his youngest son and current JHS principal, Mike McElrath, leading the way, Jim Sr., and former Jamestown Public Schools superintendents Ray Fashano and Deke Kathman arrived in the gym through the high school's "back way." 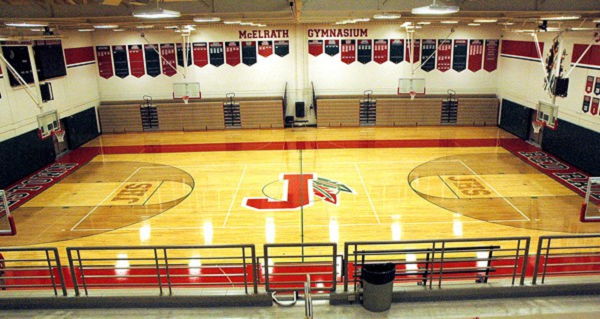 "Down through where the auto shop used to be,'' Jim Sr., said.

The men then hopped on the elevator that took them to the gym-floor level where Hedin, the architect suddenly turned choreographer, was waiting.

"I confess to being a little obsessed," said Hedin, who has been the architect for the Jamestown School District for nearly 30 years, including when the gym was first opened in 1986 and ultimately named in Jim Sr.'s honor.

At just the right time, an Alan Parsons Project instrumental, entitled "Sirius'' - it was made especially famous as entrance music for the Chicago Bulls during their 1990s NBA dynasty - filled the room and the lights dimmed as Jim Sr., 77, walked across the floor, which is styled after the University of Michigan's hardwood at Crisler Center in Ann Arbor.

"I said to myself, 'This is just absolutely gorgeous,''' Jim Sr., recalled last week.

Then he looked left and right at the large message boards mounted high on the walls above the main baskets. Alternately featured on them were images of Jim Sr., with his family; Jim Sr., with one of his Section 6 champion Panama Central School hoops teams he coached in the 1960s; and Jim Sr., all alone, commemorating his 2012 induction into the Chautauqua Sports Hall of Fame.

"The gym is a crown jewel,'' said Jim McElrath Jr., the oldest of Jim Sr., and the late Marianne McElrath's four children, who also include Karen, Mike and Amy. "It was already, and now it REALLY is.''

"Tears were welling up in my eyes,'' Jim Sr., said. "It was such a beautiful thing for Paul to have me down there to walk through it. What a wonderful, wonderful place for the young men and young women to be able to play there.

"(Jamestown athletic director and the boys varsity basketball coach) Ben Drake had said it was the best in Western New York. I'll go out on a limb and say the entire state. It's something to behold."

Drake has been part of the gym renovation project since the beginning, including when the contractors cleared out the building completely in May, which was just two months after the Red Raiders claimed their third Section 6 Class AA championship in the last four years.

''It was bare to the walls,'' Drake said. ''Everything was gone. It looked like a bomb had gone off, so it's been cool to see the progression.

''Everything just turned out so classy. The details that went into the planning and the execution really turned out phenomenal.''

It's hard to argue that point.

''They had a lot of different people with their own expertise in here,'' Drake said. ''They definitely found the right people and everything came together. Paul Hedin, in particular ... Talk about details. He made sure that everything that got done - from the signs to the paint to the wall pads - was the same green and the same red. Everything was very detailed.

''I definitely appreciated having him and his obsessiveness with the project. ... He really took it on as his personal project to make sure that things were done the right way.''

Fresh paint everywhere, highlighted, of course, in red and green, the school colors.

A resurfaced basketball court that will resemble the one at the University of Michigan.

''I did some research on different floors, wanting to do something a little bit different,'' Drake said. ''Michigan, I thought, had a really classy look to it. ... We patterned it after that and the two stains really turned out great.''

The baselines are painted red with green letters that say "Jamestown" on one end and "Red Raiders" on the other. A large "J," painted red and accented by feathers, dominates midcourt and "JHS" will be in dark stain at each foul line.

Six new baskets (one at each baseline and four practice hoops). A shot clock and score clock have been installed above the backboards and when the clock goes off, the backboard lights up, courtesy of LED lighting. The baskets and their location are controlled by a touch pad mounted on a wall.

New signs, which commemorate the boys and girls basketball all-time division/Section 6 championships, the boys/girls hoops Wall of Fame, and the school's division/Section 6 titles in other sports. In addition, a beautiful trophy case, which was built adjacent to the new concession stand, provides a history lesson to Red Raider fans as well.

''That turned out better than I could have hoped,'' Drake said. ''That really adds another touch to that upper level.''

''It has an attached message board with it,'' Drake said. ''We're still trying to figure out all the possibilities that we can do with it. ... It has a laptop computer with it that allows us to generate our own clips, images, messages and advertising that we can put up there. It will offer another layer to the special atmosphere we already have here at McElrath Gymnasium.

''We have such an awesome high school basketball atmosphere here and the recent additions just take it to another level. ... Our pregame introductions are going to be pretty awesome.''

"It's a lot brighter and they can instantly be turned on and off,'' Drake said. ''Before, it took a good 10 minutes for them to come on.''

''The first thing is it's an open-concept locker room with the pro-style lockers,'' Drake said. ''It just makes it much easier for talking and meeting, and even game planning. ... It went from a run-of-the-mill high school locker room to a professional-looking locker room.

''The video stuff we have in there is part of the school's Safari system so we can hook up DVDs and school laptop computers, wire it right in and play stuff right there on the big screen. That will make it nice for when we do game film review and scouting.''

Enhanced sound system, featuring 24 speakers, 18 more than were available prior to the renovation.

''The gym and the facility, as a whole, is better than any high school or (NCAA) Division III gym I've played in,'' he said. ''I think the girls will be excited with it and take even more pride in winning at home.''

Girls volleyball is the other high school sport that will play games/practice in the renovated gym. Physical education classes will also be held there.

''I don't know of any other school, and I've been to a lot of schools around that state, that has the overall facilities that we do,'' Drake said. ''This gym, in particular, I think is the best gym in the state that I've seen. Just the overall atmosphere that we have here is awesome.''

A re-dedication ceremony is planned for December, Drake noted, and ''we're going to invite back all the people on the Wall of Fame and other individuals who had a hand in the whole history of the gym.''

Kathman, the recently retired superintendent of schools, noted in June that the ''phase four'' capital referendum for $68 million was approved by the community in a public vote in 2012 and ''that we expect to receive state building aid to cover 100 percent of our costs for the JHS project and the other building projects planned in 'phase four.'''

"I brought basketballs from home for Mike and Jim to re-enact a night when 'Mac' and (former JHS boys varsity coach) Vere Lindquist shot hoops before the gym opened (in 1986)," Hedin said. "At first, Mac said he couldn't shoot anymore, but after Mike made his, Mac gave it a go. When his shot finally fell, we went crazy, and Mac was grinning from ear to ear.

Jim Jr., the executive director and director of clinical services at Family Service of the Chautauqua Region, drives past the gym regularly and admits that seeing "McElrath Gymnasium" mounted on an outside wall "means something every time you go by there.''