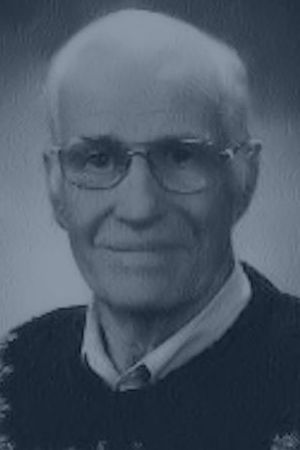 John Alm
b. 1930
Category
Ice Hockey
Year Inducted
2008
As his daughter, Melinda, said in her nomination letter to the Chautauqua Sports Hall of Fame selection committee, John Alm may have enjoyed football, baseball and speed skating, but his true passion was ice hockey. Recognized by many as the "father of youth hockey," Alm was responsible for developing boys and men's clubs in the area and was a major force in bringing an artificial ice surface into the city of Jamestown.

Long before that ice rink - Allen Park - became a reality, Alm took things into his own hands and built one himself - inside his barn in Driftwood on Route 430. And from 1966 to 1975, that small, but popular rink provided a home to some of the area's best young hockey players, as well as plenty of "fun skaters" from the area who just wanted to enjoy a day on the ice with their families. Figure skating was also taught at the old barn.

Alm was, and still is, a mentor, a teacher and a coach, sharing his knowledge of the sport with dozens of loyal players who visited his rink, along with even providing equipment if the need arose. He also organized travel teams that visited Buffalo, Lockport, Orchard Park, Clarence, Tonawanda and Cheektowaga, Erie, Olean, Bradford and other locations so players would not only learn the sport, but good sportsmanship as well.

Alm, who was born in Jamestown in 1930, attended both Falconer and Jamestown high schools, where he played football. He also played semi-professional baseball in Jamestown. Speed skating and ice hockey, however, drew most of Alm's attention and he competed throughout the area in the 1950s, where he won numerous awards and also played semi-pro ice hockey in Erie at the Glenwood Ice Rink. He also organized the Senior Hockey Club in 1957 and coached the Jamestown High School hockey team, all while running a construction business. But it was his dedication to developing youth hockey players and programs that drove Alm through those years at the barn and his efforts produced some.

In 1975, Alm put together a team of 27 players known as the Bantam All-Stars and with the help of his friend, Don Smith, founded the Chautauqua County Hockey Association, now known as the Chautauqua County Youth Hockey Association, which today has programs for children ages 4 to 19. In 1970, Alm was named vice-president of the Jamestown Area Skating Association, which he helped to organize, and, in 1973, his efforts to promote youth hockey were recognized with a trophy, but the real treasure he sought was an artificial indoor ice rink and after years of denials and more than a few setbacks, the seemingly impossible dream came true when a combination of local fund-raising efforts and state and federal assistance led to the construction of the Allen Park rink, which opened its doors in 1975 and Alm's skaters had a home where their skills and abilities could flourish. Allen Park has now been replaced by the Jamestown Savings Bank Ice Arena and Alm can still be found assisting coaches in the younger divisions and teaching children how to be better skaters.