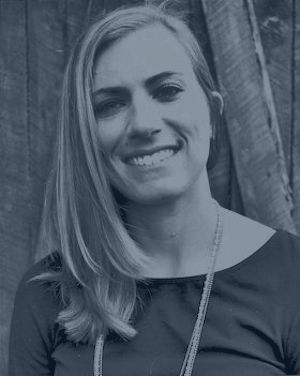 Julie Gawronski Tickle
b. 1984
Categories
Soccer
Softball
Year Inducted
2016
The headline from the Daily Gazette in Schenectady screams, "Slamming the Door."It's the fall of 2004 and the Albany-area newspaper is profiling the Union College women's soccer team, which sports a 5-0-1 record, and is the 11th-ranked Division III program in the country.

"Although the Dutchwomen … have plenty of offensive firepower," writes Gazette staffer Bob Weiner, "it's their versatile and adaptable defense that has been largely responsible for a … sparkling start, an accomplishment despite playing all six games on the road."

Accompanying the article is a large color photograph of a young woman leaping high to make a save during a Union practice. That person is goalie and Dunkirk native Julie Gawronski.

"Julie is the anchor," Weiner writes.

Brian Speck, Union College's soccer coach, is even more effusive in his praise: "She's a Division I player who came here because of an opportunity to play two sports.”

Soccer and softball. Softball and soccer.

Has anyone from Chautauqua County ever played TWO collegiate sports — one in the fall and one in the spring — at a higher level?

At the very least, Gawronski is in the conversation.

As is custom for all the inductees, Gawronski, whose married name is Tickle (she exchanged vows with Sam Tickle earlier this year) will receive a plaque and a ring for her accomplishment, and she'll step to the podium and be given five minutes to talk to her family and friends who have supported her through a remarkable athletic journey. The time in front of the microphone won't nearly be enough to do justice to what the 31-year-old has accomplished, but a couple comments from those who knew her best might help.

"Julie is at the top of the list in discussions as to who is the best athlete to ever wear maroon & white — male or female; she was that good," said former Dunkirk High School softball coach Lynn Dorler in his letter of recommendation. "In my opinion, she is the most talented athlete ever to grace the halls at DHS.”

Consider a few of Gawronski's accomplishments as a Lady Marauder:

A five-year starter on the varsity softball team, Gawronski led Dunkirk to five division and three Section VI Class B-2 championships. Along the way, she earned CCAA all-star honors all five years, and was an All-Western New York selection and WNY All-Academic team member in 2000 and 2002 respectively. Gawronski finished her career with two state records — hits in a career (176) and hits in a single season (55). In her senior year (2002), she was named to the New York State Sportswriters Association Class B first team.

As a soccer player, Gawronski was a five-year starter, a three-year captain and a five-time Most Valuable Player for the Lady Marauders. Among many accomplishments, she set school records for most goals in a season, most assists and total points as a freshman and became the first Dunkirk female to ever make the All-WNY soccer team as a junior. Her success with the Lady Marauders led her to other opportunities on the pitch, including an invitation to play and train in Europe for 11 days with other players from the Eastern United States in 1999; a chance to play goalie with the Rochester Junior Rhinos Premier Club soccer team in 2000-01; and to be the starting goaltender on the Western Region team that won the gold medal in the Scholastic Division at the Empire State Games in 2001.

Upon deciding to continue her academic and athletic career at Union College in the fall of 2002, Gawronski's successes continued.

"Julie was the best outfielder to ever play at Union, both offensively and defensively," said Pete Brown, the Dutchwomen's former softball coach, in his letter of recommendation. "It is no coincidence that Union went from a good program to a nationally ranked team while she was here.”

How accomplished was Gawronski on the softball diamond?

A four-year starting center fielder, she led Union to the NCAA Tournament all four years. Along the way, she was a two-time Liberty League Player of the Year (2005 and 2006); an ESPN The Magazine Academic All-American (2005 and 2006); a first-team Louisville Slugger/NFCA All-American (2005); and an NCAA Tournament All-Regional Team selection (2006). In her senior year, she batted .474, and led the team with five home runs, 79 total bases and a .653 slugging percentage while driving in 33 runs. Just as strong defensively, she had a perfect fielding percentage. Upon her graduation in 2006, Gawronski was the school's all-time career leader in extra-base hits, doubles, home runs, runs batted in and runs scored. Not surprisingly, the Lady Dutchwomen sported a 113-25 record with her in the lineup.

Gawronski's success on the pitch was also very impressive.

In 2006, Gawronski was one of three athletes from Union College ever awarded the New York State Women's Collegiate Athletic Association Scholar-Athlete Award. Not surprisingly, her combined won-loss record in softball and soccer was 183-35-6.

"I first started recruiting her to be a student/athlete at Union College in the spring of 2002," said Speck. "When I met her I was impressed with the way she carried herself. She was very passionate about playing both sports here. … I have come to learn over the years that the passion I witnessed that day is the way she attacks every aspect of her life.”

A resident of Whitefish, Montana, Gawronski worked for the United States Olympic Committee from 2007-2012 — she was selected to assist in the management of the USOC's main hospitality center at the London Olympic Games in 2012 — and is currently working for DREAM Adaptive Recreation.

Eleven years after helping "slam the door” as a member of the Union College soccer team, Gawronski continues to open many others for herself.

And it all started in Dunkirk nearly three decades ago. 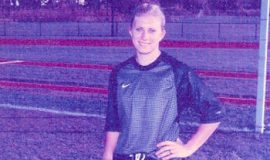 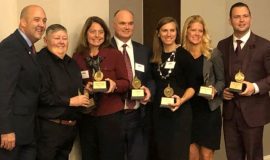