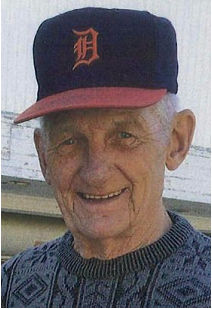 Kenneth Carl Martin, 82, of Jamestown, passed away surrounded by his family Friday (Nov. 20, 2015) in WCA Hospital.

A lifelong area resident, he was born Sept. 18, 1933, in Jamestown, the son of the late Carl H. and Svea Martenson Martin.

Ken was a 1952 graduate of Jamestown High School and a veteran of the Korean War, serving in the U.S. Army from 1954-56. In earlier years, he was employed at Hy-Grade Tool and Die and Art Metal Corporation. Prior to retirement in 1998, he was employed by Barton Tool & Die.

While stationed in Korea, he played baseball and was drafted by the New York Giant Baseball Organization in 1957. He enjoyed playing baseball and softball up until the age of 52. In 1997, Ken was inducted into the Chautauqua County Sports Hall of Fame.

Ken was a devoted husband, father, grandfather, great-grandfather, brother and friend. He will be remembered for his blue eyes, his bright smile that would light up a room when he entered and his sense of humor. Up until this summer, you could find him and his wife, Gloria, socializing at a local Tim Hortons.

The funeral will be at 11 a.m. Monday in the Levant Wesleyan Church. Pastor Cameron Leinhart will officiate. Burial will be in Lake View Cemetery with full military honors.

Friends will be received by the family from 2-6 p.m. Sunday in the Falconer Funeral Home.

Memorial contributions may be donated to Levant Wesleyan Church, or Chautauqua County Sports Hall of Fame, or the American Cancer Society.