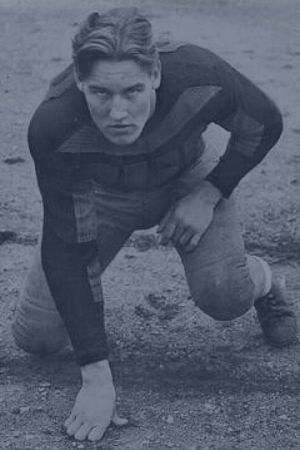 Les Beck
1914–2012
Category
Football
Year Inducted
1999
Les Beck has lived most of his life in Jamestown except for the time spent in the military in the 1940s. He was a lineman and a three-year letterman at Jamestown High School. In his senior season of 1931, he played on a powerful 8-1 team that only lost to Erie East, 58-7, in a charity milk fund game. That Jamestown team scored 317 points in being one of the highest-scoring teams in Red Raiders' history.

Beck also completed two years in track and was a member of the J Club and also a member of the National Athletic Scholarship Society. His football career saw him play for the Crescents in the City League besides being an All-Jamestown choice in the New York Penn league. He was captain of the Aerials football team for two years. Later while in the service, Beck was a captain in Japan of the 11th Airborne Angels, who won the Pacific Olympics in 1945 and 1946.

Beck attended officers training school at Fort Benning, Georgia and graduated as a second lieutenant in 1944. While there, he taught in the Paratrooper School and was chosen as the model for a huge mural showing the work of airborne battlers and posed at the University of Georgia for Army public relations.

Baseball-wise, Beck performed in American Legion play through the City AA Leagues. In softball, he played in the Journal Night League at Celoron and the Turner Athletic Club.

He helped get the poles arranged so night softball could be played at Roseland Park. Also, he organized the softball programs for the Fraternal and Industrial Leagues in the late 1940s.

Beck organized the Chautauqua Lake Archers and was the first president of an archery club in Jamestown. He set up the indoor range at the YMCA and gave demonstrations at the YMCA camp and Falconer Park.

For the Roller Skating Rink Operators Association, he was the floor manager and instructor.

When not taking part in all those sports activities, Beck spent 26 years in the Jamestown Fire Department with eight years as an assistant fire chief. He retired in 1977.

Beck remained very active in sports. As of his induction at age 85 he tended the down markers and chains at the Jamestown junior varsity and freshman football games. In addition, he attended practices and other functions of the sports boosters. Golf is a sport he also continued to enjoy, playing in the Senior League at South Hills Country Club and averaging around 98. Using a three-fingered bowling ball, he averaged around 150 in the Morton League and remained an active member in the Morton Club of the Jamestown Fire Department at the time of his induction. 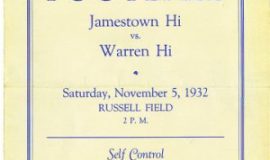 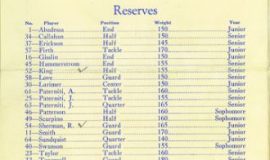 Les Beck in the line-up, fifth from top. 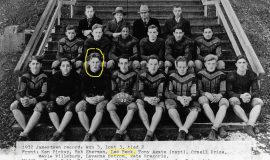 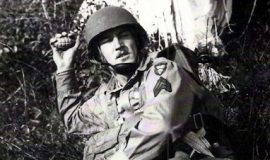 Les Beck served as the model in this 1944 Army parachute school poster. 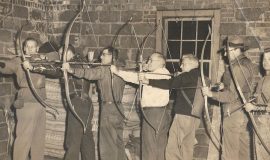 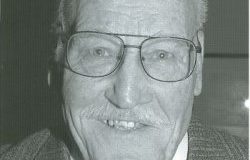 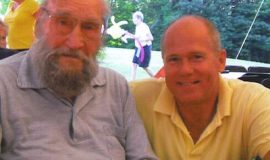 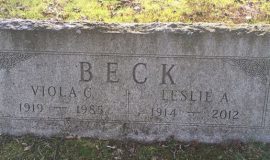 Les Beck is mentioned beginning at 14:29 in this
interview with Basil Bunce.
video courtesy Greg Peterson