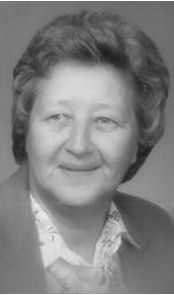 Luella Jean (Baker) Kye, 79, of Bostic, NC, and formerly of Sinclairville, NY, died Friday, May 25, 2012 at Hospice of Rutherford County. She was the daughter of the late Floyd and Lucille (Sadowski) Baker.

She was born October 17, 1932 in Stockton, NY, and graduated from Cassadaga Valley Central School, class of 1950. She retired from the New York State Thruway Authority after 22 years of service.

She was a catcher for the all-women’s softball semi-pro team Koch’s Annies, from 1949-1953. She gained fame in 1961 by becoming the first female umpire east of the Mississippi, umpiring baseball and softball for 20 years. She was inducted into the Chautauqua County Umpires Association Hall of Fame in 1987. She also coached, organized leagues and conducted coaching clinics in Chautauqua and Erie counties.

When the Babe Ruth Baseball League started girls’ softball, she was instrumental in introducing Babe Ruth softball to Chautauqua County. In 1987, she coached the champion 13-15-year-old Chautauqua County All-Stars in the regional playoffs in Buffalo. The team advanced to the Mid-Atlantic regionals in Edison, NJ, where the team placed third.

In 1993, she was inducted into the Western New York Softball hall of Fame.

During the last few years, she worked as a volunteer as a Guardian ad Litem, acting as an advocate in court for more than 70 children who were taken into custody by the Department of Social Services. In her spare time, she knitted caps for newborns in the neonatal units of local hospitals. She also volunteered for many years for Troopers’ Toys for Tots in Fredonia, NY.

She enjoyed playing cards, traveling on cruises, working jigsaw puzzles and gardening in her yard. Her favorite pastime was visiting and talking with family and friends.

As per her wishes, there will be no memorial service. Donations may be made to the American Heart Association or to your local hospice.