The bloke who busts one with the bags loaded and sends across the winning or tying run isn't always the hero around a baseball team - at least around the inner workings more often designated as "behind the scenes." Neither is the pitcher who comes up with a two or three hitter, or the manager who pulls one out of the well-known trick bag and turns defeat into victory 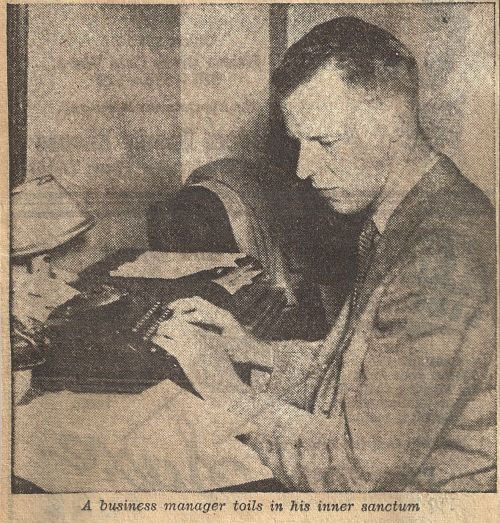 Many times, most of the times, in fact, it's the fellow the fans scarcely ever see. The fellow who goes on day after day, unheralded and unsung with one of the most unwanted jobs in baseball; a job of details and arrangements - the job of business manager.

In Class D baseball the business managership is a grueling grind that requires the never-ending persistency of an English bulldog and the patience of a kindergarten teacher. This is especially true during spring training and the early season games. Up in the high minors or the majors, the business manager has a softer seat, comparatively speaking. He is surrounded by a host of aides and his job is one of directing rather than actually doing.

The D ball business manager, though, is a "lone wolf." He handles his own, the owner's, the club's, and in many instances, the players' and manager's correspondence. He arranges routes, reservations, meals for players, handles the payroll, is in charge of the ticket sellers, the ball shaggers, ushers, scoreboard men and in addition must keep a check on all equipment.

The Jamestown Falcons are blessed with a business manager who once studied for the ministry. Perhaps that's why he's a competent and smooth operator in one of the few zany occupations still without a Washington dateline.

This fellow came to the Falcons last year under the Harry Bisgeier regime for his first fling at being a head office representative in organized baseball.

He graduated from Little Seminary High in Buffalo and later studied for the priesthood. The physical education field beckoned, however, and the red headed youngster returned to his hometown, Lockport, to take post-graduate work. His state examination flounced because of a heart condition and it was about this time Coach Chris Farrell at Lockport recommended him to Joe Brown of the Buffalo Bison's head office. Joe passed the info along to his friend, Bisgeier, and a few weeks later a business managerial career was launched.

We sat along the sidelines at sunny Hershey not so long ago watching the Falcons go through their paces. "Funny incidents crop up everyday in this business," the redhead soliloquized... "Embarrassing ones, too," he added with a grin.

"For instance, one day last season after a rainout some of the players were hazing me over the phone with repeated calls inquiring if the game had been postponed. On one particular call I thought I recognized Ken Humphrey's voice and when asked about the game I yelled: 'Go out to the park and find out for yourself.' It turned out to be one of our best local fans!"

One on the amusing side cropped up when a motorist slammed into owner Bisgeier's car on a downtown street one afternoon. Ringing the ball office, Harry clipped excitedly: 'Put this information down. I was hit in the right, rear, front fender.'" It took the business manager several minutes to get the correct information from the excited owner who insisted it was a "right, rear, front" fender.

"Never a dull moment on this job," the redhead laughed, spotting a batting practice ball just disappearing over the trees in foul territory. "But I like it. Maybe someday I'll get in the big leagues, too,"... He chuckled again at what he passed off as a joke.

This corpulent one didn't join in the laughter, though, because I think Mark Hammond has a far better chance making the majors than many players who start the long grind from the low minors to the big show.