The Post-Journal
by Frank Hyde
November 1981

Four Veteran Football Officials Have More Than 130 Years of Service

You seldom hear much about the officials at a football game (or any other sports event for that matter) unless one of their decisions displeases someone. But they are an irreplaceable part of a game that would not survive without them. And as the 1981 high school gridiron season comes to an end today at Rich Stadium, three of the four oldest (from point of service) are wrapping up another in many years of devotion to a sometimes thankless activity.

Mark Hammond, who has been racing up football sidelines for 40 years, is the dean of the quartet and is said to be the dean of Chautauqua and Cattaraugus counties football officials.

The others, each with more than 30 years of service behind them, are Milt Lindstrom, Vince Joy and Roger Mason, all of Jamestown. Hammond, who lives in Dunkirk, has been idle this season because of illness, but vows "to be back in there again in 1982." The four were, as usual, together at the annual banquet and meeting of the Southwestern Chapter of the New York State Certified Football Association, of which they are members. 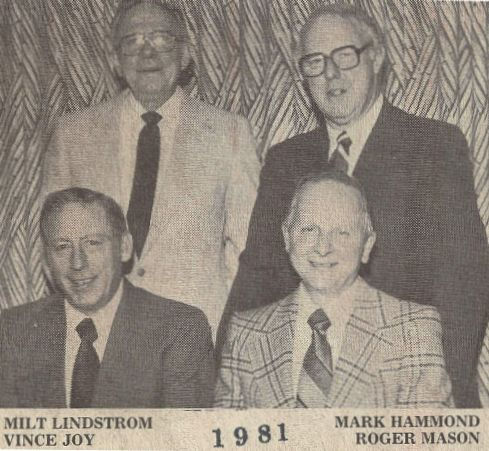 Hammond, who has also officiated 33 years in basketball and 20 years in baseball, has had a varied career outside of officiating. Medina plays an unusual role in his football officiating career. The first game he ever worked four decades ago was between Medina and Oakfield in 1941 and the last (for the time being) was between Medina and Silver Creek, in the Section 6 playoffs.

Chris Farrell, former coach at Middleport, aided Hammond in his debut on the football sidelines. "Middleport was my hometown then," Mark explained. "I'd go to high school and college games with him and hold the down markers. He was an excellent coach and one of the finest gentlemen I have ever met."

Farrell gave Hammond a boost toward baseball umpiring after World War II and that association led to him being signed on as the business manager for the Jamestown Falcons of the old PONY League, then owned by the late Harry Bisgeier. He also served in the same capacity with the Falcons under John Jachym in 1946 and 1947 and then accepted a like position in Lockport in 1948, the year the club beat Jamestown in the league playoffs.

Hammond returned to the PONY League in 1950 as GM at Olean where his club wound up second best, but beat pennant-winning Hornell in the playoffs. Such fellows as Don Zimmer, Doc Alexson, former Jamestown first baseman and league batting champ, and Charlie Neal were involved in those playoffs. Alexson was managing Hornell and Olean was skippered by Len Schulte. In 1951, Olean and Jamestown, managed by Tony Lupien, tied for the pennant and Olean won the one-game playoff for Manager Orv Cott, also a former Jamestown player. His first baseman was Paul Owens, now director of player development for the Philadelphia Phillies.

Hammond also had three stints in professional basketball. He held the general manager's post with the Tri-City Black Hawks and Syracuse Nats at various times during the winters of 1947, '48, and '49 when the league was the forerunner of the National Basketball Association. Dolph Schayes, he recalls, later picked as the greatest player in the first half century, was a rookie on the 1948 Syracuse team.

Mark was with the Ford Motor Company stamping plant at Buffalo for 23 years before retiring in 1975. During those years he once served for a time as the general manager of the Buffalo Bisons when the club won the International League pennant and beat Denver in the Little World Series. Denver was managed by Ralph Houck, now a familiar name among the big league pilots.

The Hammonds have four children. Bill's sports editor of The Dunkirk Observer, Tom is a teacher and basketball coach at Lake Shore Central School, and Kathy and Mary are nurses at Millard Fillmore Hospital in Buffalo. Wife Jean (who Mark refers to as a "sports widow for years") will soon retire after 30 years in nursing.

Oddly enough, despite years of working virtually all of the great football rivalries of his time, Hammond has never officiated one of the keenest, Fredonia vs. Dunkirk, although he's a stone throw from either school's field.