EDITOR’S NOTE: The following article appeared in the April 9, 1995 edition of The Post-Journal to celebrate Bemus Point High School’s perfect 1964-65 athletic experience during which the Red Dragons posted a 54-0-1 record in baseball, golf, football and basketball.

So as the Red Dragons played the waning moments of their state championship game at the Glens Falls Civic Center last month, Woodfield could hardly stand it.

“I was nervous. … I was sitting on the edge of my seat until it was over,” he said.

When the horn sounded to end the game, which the Red Dragons won, 61-54, Woodfield and the scores of Maple Grove followers who made the seven-hour trip erupted in celebration. 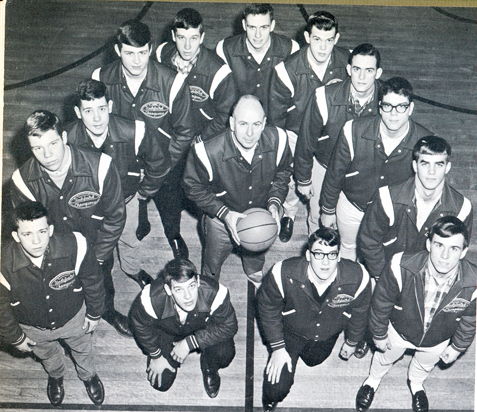 Woodfield was so excited that “I felt I could dunk.”

One could forgive the 5-foot-7 former point guard for embellishing a bit on the truth. But not only was he living vicariously through the teenagers who had just captured the first boys state championship in Chautauqua County history, but he also was reliving some of the glorious moments of a glorious year — 1964-65.

“When you’ve got time to relax and think about it, holy cow, I guess we did do all right,” Woodfield said. 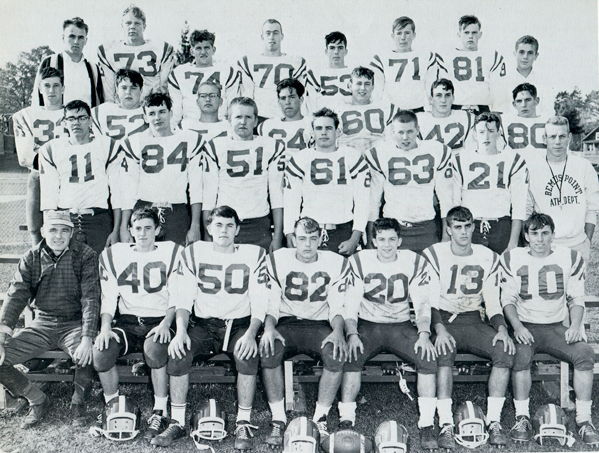 And the number of losses?

The baseball team, under the direction of Coach Mel Lewellen, began the remarkable streak by posting an 11-0 record and claiming the Section VI Class B championship after downing Akron, 3-1, in the title game.

“We had a special team,” Woodfield said. 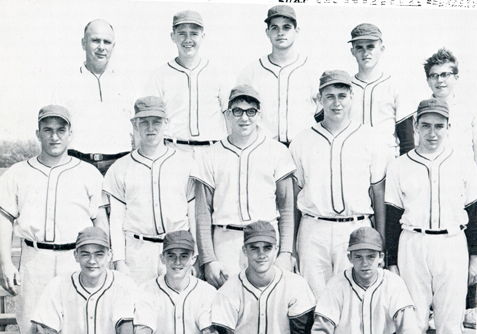 And a special pitcher.

Senior Brian Brown, the son of former major leaguer, Walt Brown, was Lewellen’s ace, a right-hander who baffled opponents with an assortment of pitches, most of which were unhittable.

In fact, Brown threw no-hitters over Pine Valley (20-0) and Portville (6-0), and finished the season with an 8-0 record and a 0.76 earned run average. In the sectional semifinal no-hit gem against Portville, Brown struck out 16 and would finish the season with 83 strikeouts and just nine walks in 53 innings.

“He had perfect control,” said Woodfield, the inspirational catcher, who led the team in hitting with a .447 average. “He could throw the ball wherever he wanted.”

Noted Brown: “It was just a great season. We didn’t have that strong of a team, I didn’t think. Everybody just played really good. … Everybody just seemed like they came through in clutch situations. … When we first started out it seemed like a mediocre team. As we kept playing, we just started gelling. Everybody stepped up. Every game it was somebody different.” 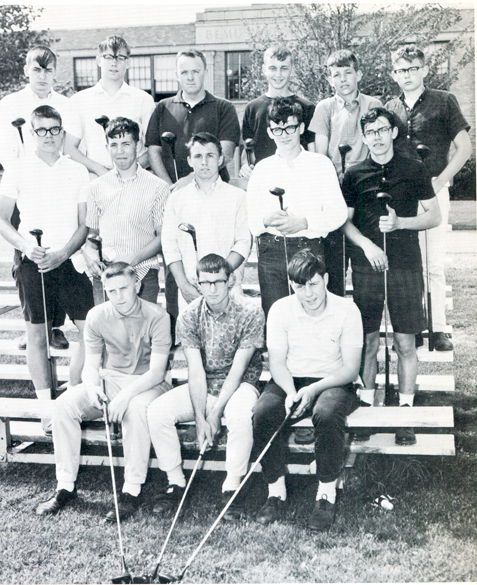 “We had a lot of good athletes for a small school,” Woodfield said.

And they were just getting started.

While Brown and company were taking care of business on the baseball diamond, the golf team was living up to its end of the bargain on the links.

Led by Norm Rice, Dave Yentzer and Tim Casler, the Bemus Point golf team finished 13-0, including five wins by shutout. The squad, coached by Jim Lucey, won the Chautauqua County golf tournament for the first time and the Section VI Class B championship. The team also placed fourth in the state qualifier and participated in the Brae Burn High School Invitational Tournament in Dansville.

Rice and Yentzer tied for low medalist in the county match and the Class B sectionals with rounds of 82. Casler fired an 83.

This group was so good that one could shoot a qualifying round of 37 or 38 at Bemus Point Golf Course and still not be a starter.

“It was unbelievable,” Head said. “Most of us grew up in Bemus. I can remember going to the golf course (during the summer) and playing 81 holes.”

Added Eckwahl: “Our school was on split sessions and that made a big difference. We’d get out of school at 12:30 in the afternoon and then we’d be out on the golf course. … I know it was a contributing factor (for the team’s success).”

FOOTBALL: WORTH THE WAIT

Bob Gustafson remembers paying his dues the first three years on the varsity football team which had a 6-18 record.

“Coming up through those years, we’d seen the likes of Marv Hubbard, Bruce Bergey and George Carter, so we had really played against some very good guys,” Gustafson said.

For the first time in the school’s 11-man football history, the Dragons, coached by Bob Bergstrom and Gordon Kidder, finished the season unbeaten with a 7-0-1 record.

“We were picked to do something that year,” said Gustafson, the quarterback on that team.

The Dragons outscored Clymer and Westfield by a combined 71-6 in the first two games and then squeaked out a 7-0 decision over Pine Valley when Richner took a pitchout from Gustafson and scored the only touchdown of the afternoon. Richner was also the hero on defense as his quarterback sack prevented a Pine Valley score inside the 10-yard line.

“I was playing linebacker and Dave said, ‘I’m going to blitz, I’m going for the quarterback. … We can’t let them get in,'” Terry Woodfield recalled. “He blitzed, I dropped back and he ended up making the tackle.”

The only blemish on an otherwise banner grid season came against Silver Creek when the Dragons could manage only a 19-19 tie.

After that, Bemus Point went on a tear, outscoring its opponents, 117-14, over the final four games.

Lewellen, 71, retired in 1979 after 28 years in the school system and now lives in Venice, Florida. And while most of his time is now devoted to softball, a game he plays six days a week, his memorabilia from his 27-year basketball coaching career is at his fingertips.

In fact, every once in a while, Lewellen will pull out one of his pocket notebooks, containing statistics, scores and details of every game he ever coached.

“I knew them well and I think the more successful coaches are those that know them in and out of the classroom,” Lewellen said. “You can communicate with them. We’ve always had a great group of kids in Bemus.”

Experience was the key to that team 30 years ago.

“The main thing was we had three of us who played on the only losing season that Mel ever had our sophomore year,” Gustafson recalled. “We had a lot of experience. Back in those days, we played together always, in all kinds of weather. …. We knew each other extremely well.”

And everyone contributed as the Red Dragons, posted a 21-0 record, including a 67-61 sectional championship victory over Franklinville at Memorial Auditorium.

The reason for the Red Dragons’ success was simple — teamwork.

“We weren’t really that big, but we really played good together,” said Woodfield, a guard on that team, “Mel said at the time it was his best team. … There was nobody really outstanding. Everybody played good.”

Gustafson joined Woodfield at guard, Swanson was the center and Carleton and Head were the forwards.

“We were strictly a pattern, half-court offensive team,” Lewellen said. “We used the Cincinnati swing-and-go offense, the one Oscar Robertson made famous. This team played that offense to perfection.”

Swanson led the team in scoring, followed by Carleton, Head, Woodfield and Gustafson. Chamberlin and Evans were the first off the bench.

But Bemus Point could do more than score points. In fact, the Red Dragons gave up an average of just 45 per game.

“He got me to be a defensive fanatic,” Gustafson said of Lewellen. “We played a lot of box-and-ones. Mel told me that if you score four points and your guy scores two, you’re helping out.

“He demanded respect and he worked you hard,” Gustafson added. “He just stressed the fundamentals of basketball so much that we didn’t make a lot of mistakes. Maple Grove is always known to have shooters. Mel started that just with the drills and instilling in us to keep playing and keep shooting.”

We had beaten them by 14 points at home and we went over there and they had us beat by maybe six or seven points with two or three minutes to go,” Woodfield said. “We pressed, got it into overtime and won it. Evans hit a couple of free throws in overtime.”

The ironic thing about Evans, the Class B scoring leader the year before, was that his playing time had been limited by a foot injury suffered early in the season.

“It was neat for John, because he hadn’t been playing much,” Gustafson said.

Bemus Point’s next six games were one-sided victories, including quarterfinal and semifinal routs of Silver Creek (62-40) and Barker (85-46), setting the stage for the sectional title game against Franklinville.

Sporting a 20-0 record, the Red Dragons almost let its unbeaten season slip away as they fell behind, 22-10, after the first quarter.

But they found their bearings in time for the second half.

Thanks to the play of Chamberlin and Head, who scored 21 points, Bemus Point outscored Franklinville the rest of the way to claim its first sectional title since 1959, preserving the first of Lewellen’s three unbeaten seasons.

“It was a team effort,” Gustafson said of that magic hoop season. “It was rare that five guys weren’t in double figures.”

Head said he remembers that season for another reason.

“The most memorable thing for me was the integrity that Mel Lewellen made his athletes have,” he said “If you gave the ref a tough time, you were coming out. If you weren’t an honorable person, you weren’t going to play for Mel. There were kids who were pretty decent athletes who never played for Mel because they had a (bad) reputation.”

“Mel deserves a phenomenal amount of credit for molding our lives. He wasn’t just a coach, he was a counselor. Mel was never one not to be there (for you). … He came to you when he saw things weren’t right.”

When the Class of 1965 graduated, the Bemus Point High School closed. The newly constructed Maple Grove Junior-Senior High School would welcome students in the fall of ’65.

But the memories of the “old school,” located in the heart of the village, still linger in the minds of many.

“Bemus was just a phenomenal little town to grow up in,” Head said. “The school offered itself for any entertainment you could possibly want.”

And in that one 12-month period, there was sports entertainment beyond anyone’s wildest imagination.

“The accomplishment is so incredible,” Head said, “But if you look at the people who were involved, it was the same core of 12-15 guys who played football, basketball, baseball and some shifted over to golf.”

It can be assumed that their combined record of 54-0-1 isn’t likely to be broken in the near future, according to Gustafson.

“Everybody has so many more sports (now), so I don’t think it’s ever going to happen again,” he said. “It was a neat accomplishment in its time. If you take the major (sports), it’s something that may not be done again.”