More Than Meets The Eye

The article is reprinted with the permission of the Jamestown Gazette.

Who would think that a lowly item, such as a match book, would have a rich history - or maybe a little known one? Although we rarely see match books these days because smoking, to a large extent, has been discouraged, they were once a popular and ubiquitous means of advertising a business. Restaurants, where tobacco products were often sold (at the front counter, from a cigarette girl walking between tables, or from a vending machine), were probably the most likely establishments to advertise on match books since many of their patrons “lit up” after a meal or having a drink at the bar. The paper matches were a convenience to smokers and a boon to business owners who wanted to publicize and promote their places of business. And they were free giveaways!

Some of the restaurants advertised on the following match book covers, supplied by Bob Johnston, will be familiar to many of you Jamestonians who recall a time when a multitude of eateries peppered old Brooklyn Square. Take DeMarco’s, for instance. In its early days, the restaurant, at 136 Institute Street at the southeastern most boundary of the Square, was owned and operated by Josephine DeMarco, David Frushone’s maternal grandmother. In 1951, Dave’s parents, Jim and Josephine Frushone, purchased the restaurant, that hugged the bank of the Chadakoin River at the corner of Institute and Victoria Avenue near the bridge.

It was renamed Frushone’s Tavern D.B.A. DeMarco’s, and one of its features that may still be remembered by former patrons was Jim Frushone’s “picture wall” that held candid photographs of patrons as well as art originals and cartoons done by Jim himself. But in 1971, the old tavern was razed and a new English Tudor one-story structure, designed by the Frushones, was built on the footprints of the original restaurant. The old match book cover motto—“Easy Place To Get Acquainted” - gave way to a new one - “The Friendliest Place In Town”! Frushone’s Tavern was the first building to be constructed when urban renewal development began in that section of Jamestown. Dave Frushone managed the new tavern from 1971 to 1993, the year he sold the landmark business.

Montagna’s Bar and Grill. Who doesn’t remember this restaurant smack in the middle of Brooklyn Square on the busy corner of S. Main and Harrison? It was originally owned by Sebastian and Mary Montagna at 37 S. Main Street, right next door to the popular Roosevelt Theater. However, for a number of years in the 1940s, the Montagnas also owned and operated the Forest Grill at 16 Forest Avenue, a small restaurant right next door to the City Public Market. In 1948, the Montagnas sold the Forest Grill but maintained their signature restaurant where not only Sebastian and Mary worked but also their son Tony, who tended bar, and his wife Bonnie. Like many owners’ wives, Mary Montagna did the cooking, supplying patrons with traditional Italian dishes and sandwiches and hamburgers. Soft drinks as well as bottled and tap beer and liquor were sold. There was a juke box in the center of the restaurant and a cigarette machine near the entrance! The restaurant closed in February of 1966 with the death of Tony Montagna who had managed the place for many years. In 1970, Sam Sardi rented the space and opened a restaurant called The Hub. It remained in business for three or four years, until urban renewal claimed it and all of Brooklyn Square.

Harry Martenson, a “Swede” pitcher, great baseball player, and advocate of America’s favorite pastime, got into the restaurant business when he went to work for Axel Swanson, owner of the Old Haymarket Café at 42 S. Main, in the mid to late 1930s. In 1941, Harry bought out Al Eckberg’s establishment at 29 Forest Avenue in the Kent Building. He called his restaurant/tavern Harry’s Lunch and offered his patrons sandwiches, home-made soups, hamburgers, Friday fish fries, and oyster stew all cooked by his wife Flora and his mother Betty Martenson. Harry’s Lunch was a classic old-time bar whose customers were primarily working class people from the local factories and businesses; however, you could also find families eating there some evenings. On Friday nights, people would come to the restaurant to watch boxing matches on TV and have a drink or two while they discussed the match or talked baseball. No fancy drinks were served at Harry’s, but during the holiday season, Harry Martenson was well known for his Tom and Jerrys. Probably a great drink on a cold night during Jamestown winters! In 1948, Harry Martenson bought the Kent Block from his landlord, Sam Saeli. He put his mother Betty in charge of renting and maintaining the apartments that were above the ground-level businesses, among them Samson’s Liquor and Marvin Yasher’s upholstery shop. In 1968, urban renewal bought out Harry Martenson and the Kent Block was torn down. At that time, Harry had worked seven years for Axel Swanson and twenty-seven years for himself. Harry Martenson was active in baseball for the many years he lived in Jamestown and was inducted into the Chautauqua Sports Hall of Fame in 1987 along with Morrie Mistretta, George Hale, and Jack Lawrence. Harry Martenson died on January 5, 2003, at the age of ninety-eight. In his long life he was a business man, baseball player, sports enthusiast, sports sponsor, and a family man.

Although “girly” was definitely in when some of these match books were available, those images were also used to uphold patriotic themes during WW II. The Narrow Gauge Restaurant, which was directly under the railroad viaduct on the eastern corridor of N. Main Street, was so named with that railroad term because it was barely wide enough for a customer to walk between some small tables and the bar itself. Although patriotic may be stretching it a bit from the perspective of the images on the Narrow Gauge’s match book covers, I’m sure everyone “got the picture” - so to speak! The Town Hall match book, however, really told the story of America’s fight for freedom. The miniscule images of a tank and a bomber with the catchy rhyme of “Keep ‘em Rolling, Keep ‘em Flying, Keep Democracy from Dying” was a call for all workers who remained on the home front, both men and women (remember Rosie the Riveter?) to keep our war machines on the march. They helped win the war too.

The Town Hall, owned originally by the Bartoldsons, a restaurant and night club at 6 S. Main. It was a popular place for dining, dancing, and night club acts. Dorothy Brooks, a name and personality known to many, played the piano and often accompanied acts and performers on stage. Another music entertainer at the Town Hall was Jim Beatty, a clarinetist, who brought in overflow crowds. In the early to mid-1960s, a small group of jazz musicians played at the Town Hall, but its popularity was never quite the way it was in its heyday, and soon it too fell to urban renewal. 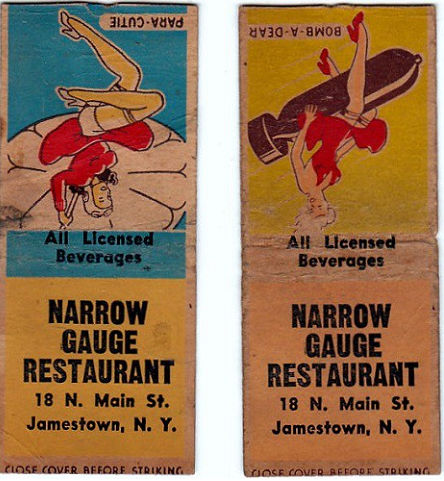 I can’t tell you readers anything about the Deer Restaurant at 53 Harrison, the Brooklyn Restaurant at 20 S. Main, or the Palmview at 1 ½ N. Main. But if anyone can enlighten me about them, please feel free to contact me. As a footnote to this article, let me remind readers that the images on many old match book covers were hand-drawn by artists. I’m sure there were a number of match companies that manufactured book matches, among them the American Match Co. of Zanesville, Ohio and Match Corp. of America in Chicago, Illinois. These days, however, match books seem to be collectors’ items only.

I would be remiss if I did not thank Dave Frushone, Buzzy Montagna, Sheila Martenson Brinkley, Cherril Castle, and Roland Swanson for the personal narratives that appear in my latest book, REMEMBERING BROOKLYN SQUARE: THE 1930s TO THE 1960s, because their contributions informed much of this article. The complete articles and vintage photographs about the establishments where they worked or that they or their families owned and operated are available for reading in the above mentioned book, which can be found at the Prendergast Library and the Chautauqua Room of the Hultquist Library on the JCC campus and for purchase at the Fenton Museum and History Center in Jamestown and Off the Beaten Path Book Store in Lakewood. (Comments may be sent to Joan Lindquist at scandit@att.net) 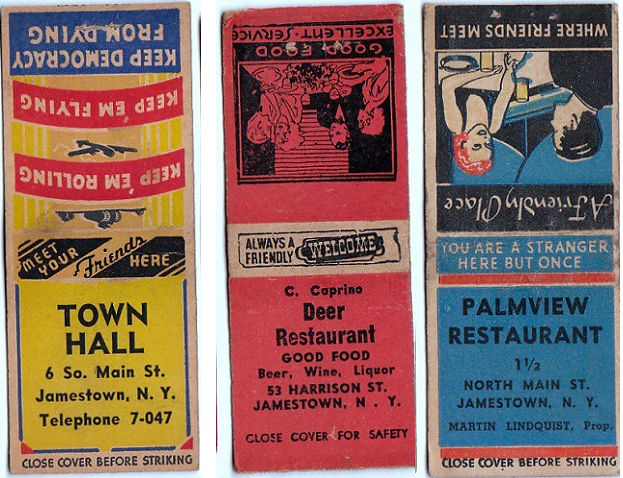