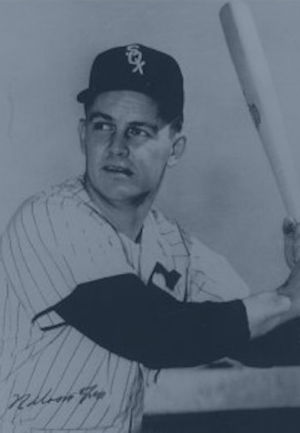 The late Jacob Nelson Fox, who was better known as Nellie Fox, is the only former Jamestown professional player ever to be elected to the Baseball Hall of Fame and now to the Chautauqua Sports Hall of Fame.

After several years of being a strong candidate for the Baseball Hall of Fame, Fox was finally chosen on March 5, 1997 for his outstanding 19-year career as a second baseman with the Chicago White Sox, the Houston Astros and the Philadelphia Athletics.

Of course, the greatest achievement by Fox is that while with the White Sox for 14 years he set a major league record with 11 seasons of having the fewest strikeouts.

He once went 98 games without striking out with that string ended by New York Yankees Hall-of-Famer Whitey Ford in 1958.

Fox was the third son born to Jacob and Mae Fox on Christmas Day 1927 in St. Thomas, Pennsylvania, near Chambersburg. He was a very hefty 11 pounds at birth and on that day it is believed his Dad went out and bought him his first baseball glove. Fox started playing with a ball even before he could walk and at 6 was the bat boy and mascot for the St. Thomas town team of which his dad was a member.

When he was only 10, Fox persuaded the manager to let him pinch hit against one of the top pitchers in the area and he stunned everybody by hitting a single over a drawn-in infield. This was the start of his baseball career.

By the age of 13, Fox was playing on the St. Thomas High School squad that was running up football-like scores and saw action at second base and centerfield.

At 16, he went to a tryout camp in Frederick, Maryland, and was signed to a professional contract by legendary Hall of Famer Connie Mack, the manager and owner of the Philadelphia Athletics.

On May 3, 1944, he made his debut for the Lancaster Red Roses in the Class B League and recorded a single in three plate appearances at Wilmington, Delaware. Fox played first base for the most part, although he did perform in the outfield at times. He batted .325 in 24 games with six doubles among his 25 hits.

However, Fox was a player without a position as being only 5-foot 4 meant he wasn't a first baseman. So, it was decided that he needed to play all the time and he was sent to Jamestown of the New York-Penn League.

He joined the Falcons in the midst of a pennant race that eventually saw Lockport win out. Manager Ollie Carnegie decided with his speed that he would be a good lead off man and centerfielder.

Fox became a teammate of another Chautauqua Sports Hall of Fame pitcher, Lyle Parkhurst, and that duo helped lead the Falcons to the playoff championship over Lockport.

After being in military service in 1946, Fox returned to Lancaster with a .281 average in 1947. That same year, he made his major league debut with the Athletics against Cleveland Indians ace Bob Feller and grounded out while pinch-hitting.

Fox played most of 1948 at Lincoln, Nebraska, and batted .311, then, was called up to the Athletics again and had his first major league hit, a single, off Dick Weik of Washington.

After batting .255 in his first full year with the Athletics, Fox was traded in the off-season to the Chicago White Sox for catcher Joe Tipton.

There, he began a star-studded career that included the Most Valuable Player in 1959 when he led the White Sox to the American League pennant.

That same year, he was named The Sporting News Player of the Year after hitting .306 with 34 doubles, six triples and two home runs while driving in a career-high 70 runs. 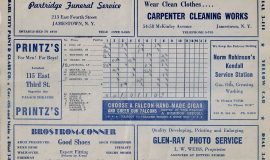 Scorecard from a 1944 Jamestown Falcons game in which Nellie, #11, led off and played centerfield. He got three hits in the game. 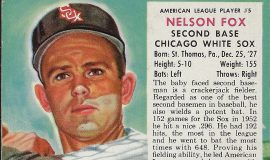 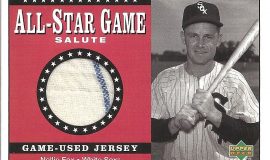 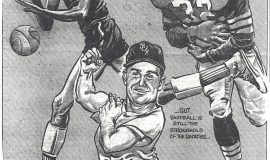 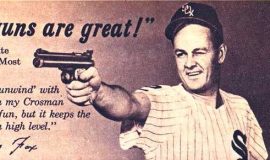 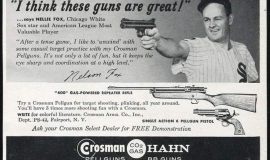 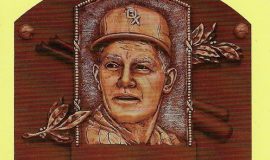 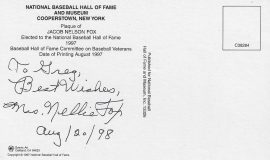 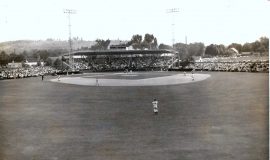 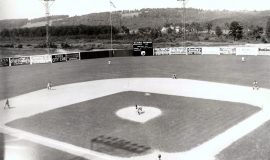 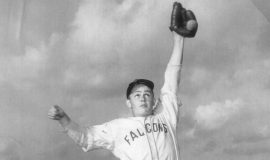 Nellie Fox as a Jamestown Falcon in 1944. 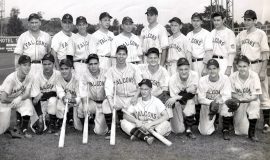 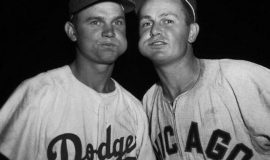 Big League Chew. Don Zimmer and Nellie Fox (right) both played baseball in the PONY League at Diethrick Park (nee Municipal Stadium). Fox played for the Jamestown Falcons in 1944. Zimmer played for the Hornell Dodgers in 1950 and was named the league's Most Valuable Player. 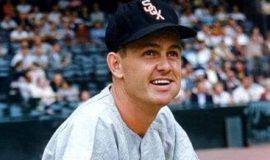 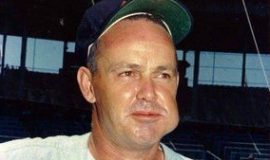 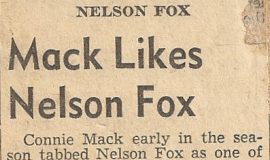