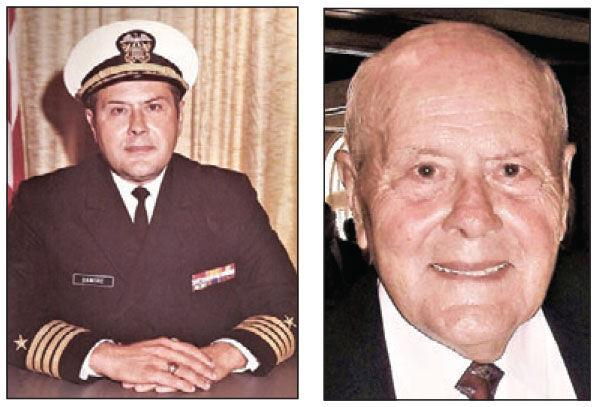 Dr. Patrick R. Damore, 90, of Fredonia, New York, died on Sunday, May 23, 2021, at the Chautauqua Nursing and Rehabilitation Center.

Pat was born June 18, 1930 in Oswego, New York, the son of Salvatore (Sam) D’Amore, from Sgurgola, Italy (near Rome) and Adeline (D’Amico) D’Amore, from Naples, Italy. Pat enjoyed a happy childhood as the fourth child of proud, hard-working, newly arrived Americans in a close-knit neighborhood. Foreseeing the benefits of military service, he enlisted as a Seaman Recruit in the Naval Reserve at age 17, while still in high school.

Pat graduated from Oswego High School in 1948 lettering in four varsity sports: football, basketball, baseball and boxing. With the help of his parents and his three older sisters he was able to attend college at SUNY Brockport, where he played varsity football for three seasons and intramural basketball. He graduated in 1952 with a degree in Health/Physical Education. He was commissioned an Ensign, (United States Naval Reserve via the Reserve Officer Candidate program) and served as first LT, Gunnery Officer and Operations Officer from 1952-1954 aboard the USS CURRIER (DE 700) during the Korean Conflict. He was released from active duty as a Lieutenant (junior grade).

Over the next 36 years, concurrently with his career in education and athletics, he remained in the Naval Reserve, attending weekend drills and performing annual, two-week active-duty training periods. His service included units in Dunkirk, New York, Jamestown, New York, Erie, Pennsylvania, and Ravenna, Ohio, serving as Commanding Officer of seven of those units.

He served as Commanding Officer of the Dunkirk unit, which was awarded the best small Surface Division in the nation. He performed his last two active-duty training assignments on the Commodore’s staff in Naples, Italy. He retired in 1983 with the rank of Captain from Readiness Command Region 5, Ravenna, OH, where he served as Mobilization Officer for the states of Ohio, Pennsylvania, West Virginia and New York. He was presented the Navy Commendation Medal at his retirement ceremonies.

Pat earned a Master’s Degree in Education from St. Lawrence University and a Doctorate in Higher Education/Student Personnel Services from the University of Oklahoma. He spent two seasons as Head Coach of soccer, basketball, track and baseball at Hammond Central School in Hammond, New York, winning Section 10 Basketball Titles both years. He accepted an elementary education position at the Fredonia Campus School, Fredonia, NY and from there moved to the Fredonia State campus as Assistant Professor of Physical Education. In 1968 Dr. Damore was named Director of Athletics, Men’s Intramurals and Sports Publicity. He coached tennis for four seasons, soccer for nine and basketball for four.

In 1979 Pat became the first commissioner of the State University of New York Athletic Conference (SUNYAC) and served in that capacity for 33 years. During his tenure, he was responsible for significant growth in both men’s and women’s collegiate athletic programs. He earned numerous accolades and state and national awards for his distinguished achievements and noteworthy performance, including induction into the National Association of Collegiate Directors of Athletics Hall of Fame, Brockport State and Fredonia State Athletics Halls of Fame and the Chautauqua County Sports Hall of Fame.

Pat was most touched upon receipt of the Hometown Hero Award, presented by DFT Communications, for his many local contributions, which include serving as Village Trustee for two terms and active involvement in the Dunkirk/Fredonia Lions Club, Chautauqua County Chamber of Commerce, the Red, White and Blues Festival Committee, Olympic Torch Relay, St. Anthony’s Parish Council and Boy Scout Troop, Little League baseball, Fredonia Soccer program and American Legion Post 59. He was instrumental in purchasing and overseeing the restoration and operation of a trolley to help promote tourism in the downtown area and spearheaded the campaign for the entrance signs to the village. Whenever he was lauded for his accomplishments, he typically responded that he “had good people helping him.”

Following his retirement as SUNYAC Commissioner, Pat greatly enjoyed golf, wine-making, boating (Life Member of the Dunkirk Yacht Club), and the wonderful camaraderie of his two daily coffee groups. He also enjoyed attending the athletic events of his grandchildren and their school programs.

He was predeceased by his first wife, Nancy (Wentz) Damore who died in 1985. She was from Wichita, Kansas and they met in Hawaii. He was also predeceased, in addition to his parents, by three sisters and their spouses: Isabelle D’Amore Molinari (Patrick), Catherine D’Amore Tesoriero (Anthony), and Yolanda D’Amore (Fred) Lee. Also, two nephews: Judge Patrick Molinari, and James Molinari, DDS.

He is also survived by several nieces and nephews. He looked forward to their frequent phone calls, especially from Bob, Bobby, Sherry and cousin, Dominick. The family thanks them for their continual devotion.

A Mass of Christian Burial will be celebrated on Friday June 4, 2021 at St. Anthony’s Church, (Corner of Cushing & Orchard streets, Fredonia, at 11 a.m. Please assemble at church. No prior visitation hours. COVID-19 regulations will be enforced. Please wear a face mask and maintain proper social distance. Capacity is limited. Dr. Damore’s funeral Mass will be live streamed on his site on the Larson-Timko Funeral Home website, larsontimkofuneralhome.com. The live stream link will be available on Dr. Damore’s site on Friday, June 4, 2021 at 10:30 a.m. with the funeral Mass commencing at 11 a.m. Any questions on the live streaming please call the funeral home at 716-679-9000.

Flowers are gratefully declined. If desired, a donation to the Fredonia College Foundation for the Patrick R. Damore Scholarship Fund is suggested.