We assume that the first settlers here did not have much time for idleness or winter sports, but we know that they had an occasional wood-chopping contest or sometimes target practice with their rifles. In the 1890s, they had horse races on the ice on Findley Lake in January and February. The horses had special calks on their shoes so they would not slip on the ice. People skated on the ice on Findley, Cassadaga Lake, Chautauqua, as well as on any small pond that was frozen in Clymer, Sherman and others. Chautauqua Lake had ice boats with sails and they frequently had ice boat races.In the 1930s and '40s, sledding and tobogganing parties were very popular on the hilly highways such as Stockton, Sprague Hill near Levant, Ravlin Hill near Clymer, Buesink Hill in Mina and others. On a good night, 30 or 40 young people would gather and spend two or three hours speeding down the icy hill and coasting almost to Skellie's store, nearly half a mile away, then walk back up the hill hauling their sled or toboggan for another run. Sledding parties lasted until someone in state highway management decided to spread a load of cinders on the road so it would be safer for automobiles which had become more and faster. That was the end of sledding parties on the roads.

Skiing became popular in the deep snow on the hilly meadows with wooden skis made in Norway or else copied from those. In the 1960s, a Dunkirk man, Leo Veneko, had a factory to make skis and he invented a new method; instead of wood, he used plastic. He experimented with grooving the bottoms and attaching a narrow metal band to the edge of his skis to make them work better on crusty or icy snow. He patented that idea, moved to Jamestown and set up his manufacturing plant in the old Broadhead Mills furniture factory, but his new idea was adopted by the big ski manufacturers such as the Austrians and the Japanese and they were strong competitors of his.

In 1935 in Westfield, Mayor W.B. Crandall along with Jack Robinson, the owner of the popular Gorge Golf Course, south of the village, went to Cleveland and made arrangements with the Cleveland Travel Bureau to run weekend excursions over the New York Central Railroad to Westfield from Cleveland, Buffalo and Erie, ''weather permitting.'' Robinson had made arrangements with Dr. Cobb to start his ski run and jump 300 feet above his fifth fairway and on down to a jump off the third green and over the Tee Off The Top of The World hill past the eighth. But some years, the weather was not great. There were winters with very little snow, so the ski excursion faded away.

In 1964, Phil Gravink of Clymer, a Cornell graduate and an athlete, had the bright idea of building a ski slope in his farm west of the village. This idea grew and he involved Mylar Babcock, Jim Caflisch and Jack Dean in the project. They decided to use a higher hill and contracted with Otto Schniebs, an Austrian ski resort designer who helped them choose Pike Hill near the Pennsylvania border in the town of French Creek. This involved in getting purchase options on nine deeds on that hill, but one in the middle said his land was not for sale. So the group countered by offering him a place on the cooperation board so he accepted this and brought in his 30 acres.

A board meeting at Gravink's kitchen table decided it was a good plan, everyone worked hard. Twelve months later, there was the grand opening of Peek'n Peak Ski Resort, which has grown into a great year-round vacation and sports complex, employing 700 to 1,000 people.

Gravink was later appointed by the state as manager of Gore Mountain Ski Resort, and later he held the same post at Loon Mountain in New Hampshire from 1977 to 1991. He developed Loon into a leading modern resort and he was a key player in influencing the policies of the United States Forest Service.

Gravink spent 35 years at the national level in Ski Area Management on the board of the National Ski and Snowboard Association and then was chairman for two years. Recently he was named to the U.S. Ski and Snowboard Hall of Fame in 2011.

One month after Peek'n Peak opened, a group of business and professionals in Westfield opened Eagle Ridge Ski Resort on the higher elevation south of the village. It ran for a few years but it was handicapped by being too close to Lake Erie with its warmer weather and lacked deep snow. One of the principals, Tony DeMambro, was killed in a tragic accident on the slopes, and they sold the lodge and the land for a residence. Some of the principals were Price, Nixon, Horsch, Clark, Mead and Northrup.

About a month later, a group of businessmen in Jamestown started their own ski resort near Cherry Creek, called it Cockaigne, bought 2,300 acres of land and the Austrian pavilion from the New York World's Fair and moved it up here. This time delayed their opening until February 1966, making it a very short season the first year. They built a race track and a horse barn and began selling building lots for vacation homes but they were not successful even though they hired a business manager. The bank foreclosed and offered all the land and the whole project for sale. Two local businessmen, Jack VanScoter of Fredonia and Jack Dean, bought it and began to operate it. VanScoter was an experienced real estate broker and Dean had six years experience as a board member and publicity director at Peek'n Peak. They set up a new New York corporation called Green Highlands Inc. and each had 50 percent ownership. They ran a horseback riding stable and school which was very popular and provided year round income. Dean bought the skis and boots for the rental shop and VanScoter obtained some family money for the overhead until it began to grow. A couple of years down the road, VanScoter took over the management, shuffled the stock and changed the board personnel. Over the years he sold 500 acres of the land, cut and sold a lot of timber and sold gravel.

Cockaigne was successful for many years as it was at a high elevation and definitely in the snow belt. They had a good student program with several local schools and a well organized ski patrol. All this came to naught on a cold night in January 2011 when the beautiful lodge caught fire and was completely destroyed in spite of heroic efforts on the part of several are fire departments. The bad news is there are no funds to build a new ski lodge.

In 1979, a new idea in winter sports came to Chautauqua County in the form of the Chautauqua Ski Marathon. Some of the originators were John Bertram, Jack Volcker, Bob and Joyce Besch, Harry Barton, Don Eno, Don Nash, Jack Dean, Ray Lawson, Elliott Long, Al Rhebergen, Don Strobel, and Jim Nelson. These and about 200 other volunteers organized and ran a 55-kilometer (34-mile) marathon run, starting at the Pennsylvania state line near Clymer and ending at the Mayville Conservation Club Hall, for eight years. It was classed as the longest ski marathon in New York state. Entrants started out the first year at 400 and increased from 800 to 1,000 skiers by 1986. The course was divided into three sections and each skier could choose how many to do. Refreshment stands were set up in each section for water and food by volunteers and each place where the trail crossed a highway volunteers had to be there to flag cars to let skiers cross. A cannon, borrowed from the Sea Lion, was used to fire the starting shot so everyone could be sure to hear.

In recent years another winter sport has been added, snowmobiling, with at least three membership clubs plus well-groomed trails in several parts of the county. Participants are both local and those who come from Pennsylvania, Ohio, West Virginia and other states, as they learn about our 200 inches of annual snow plus the groomed trails.

''The only difference between the men and boys is the price of their toys,'' sure applies here.

Jack Dean is a resident of Westfield. 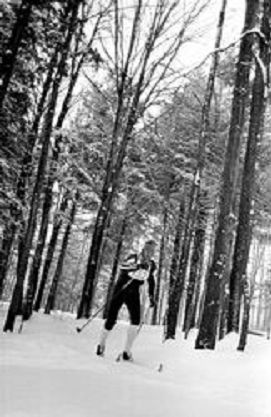