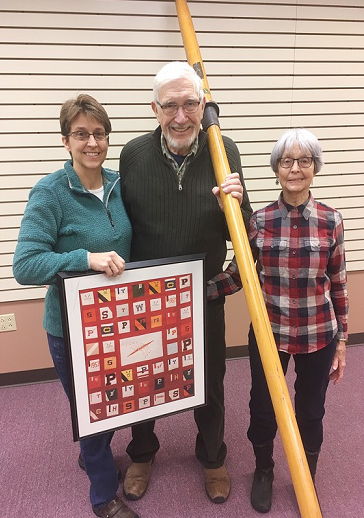 Phil Gravink, a 2007 inductee of the Chautauqua Sports Hall of Fame, visited the Hall last weekend with his wife, Shirley, and daughter, Jill, to donate an oar and a framed photograph from his memorabilia collection. The oar was used by Phil during 1957 as the stroke of the Cornell University eight-oared crew. The crew was undefeated as they won the Intercollegiate Rowing Association American Championship, the Grand Challenge Cup at the Henley Royal Regatta in England and the European Championship in Luzerne, Switzerland. The oar was presented to Phil by his Cornell coach, Stork Stanford, at a homecoming banquet in Clymer on Aug. 1, 1957. The framed photograph is of a quilt that resides in the sports archives at Cornell University and is used as a backdrop on the dais at Cornell rowing events. It is a long-standing tradition in rowing that each team member bets his shirt in a winner-take-all contest with his opposites from all of the other boats in a regatta. Back in the boathouse after a race, all the losing opposites seek out the winner, congratulate him and surrender their shirts. During Phil Gravink’s career at Cornell, 1953-1957, he won 108 shirts and lost just five, as his crew never finished worse than second. Several years later, Phil’s sister, Deleo, his wife, Shirley, along with his mother and mother-in-law, cut the school colors from 50 of those shirts and sewed them into a quilt. In photo above, from the left are Jill Gravink, Phil Gravink and Shirley Gravink with the donations at the CSHOF. Submitted photos.
{"infinite":"true","pause_on_hover":"true","adaptive_height":"true","items":"5","auto_play":"true","speed":"600","rtl_mode":"false","dots":"false","nav":"false","slides_to_scroll":"2","auto_play_speed":"3000","draggable":"true","swipe":"true","lazy":"false","carousel_mode":"standard","center_mode":"false","center_mode_padding":"60px","vertical":"false","nav_type":"nav_arrow","items_desktop":"4","items_desktop_small":"3","items_tablet":"2","items_mobile":"2","nav_arrow_type_horizon":"angle_arrow_horizon"}