Fredonia Central School has produced more than its share of outstanding athletes who have made their way to the Wall of Honor at the Chautauqua Sports Hall of Fame. Sarah (Bogardus) Burnett will join other exceptional Hillbillies as a member of the CSHOF’s Class of 2022.

Burnett, born in 1987, is a life-long resident of Chautauqua County. She is a 2005 graduate of Fredonia Central where she displayed her incredible athletic versatility by earning 6 varsity letters in swimming, 5 letters in softball, 4 letters in basketball and 1 in track & field.

She was Coach Dave Polechetti’s starting shortstop on the Fredonia softball team since 8th grade. She was a member of the 2003 Section VI Class B championship team.

In swimming she established several records for the Hammerhead Swim Club as a youngster and set the 100-yard breaststroke record at Fredonia High.

As good as she was at Fredonia High, her basketball career exploded at Daemen College, 2005-2009, where she was a four-year starter. She graduated as Daemen’s all-time career scorer with 2,206 points and 9th in all-time rebounds with 760. She set single season marks with 702 points and 23.4 points per game average in 2008-2009. In total, she ranks in the top ten in 13 statistical categories at the suburban Buffalo institution.

Sarah led her team to the American Mideast Conference North Division Championships in 2006-2007 and 2007-2008. Her team made three National Tournament appearances during her career. Daemen’s record was 91-35 during Burnett’s tenure.

Other accolades she received while playing hoops at the Amherst, NY college, were selection to the AMC All-Freshman all-star team 2005-2006 and AMC Player of the Year runner-up 2008-2009.

She was inducted into the Daemen College Athletic Hall of Fame in 2009.

Burnett currently is an English teacher at Dunkirk High and resides in Mayville, NY. 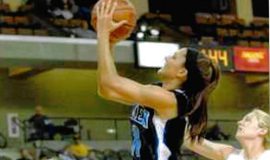 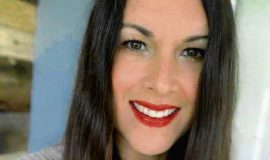 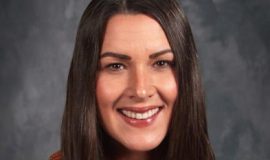